Catching up with the Danny behind Danny’s in Bucktown 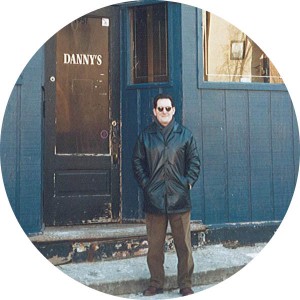 “I’m working-class,” says Danny Cimaglio, when asked to describe his occupation. The 63-year-old’s matter-of-fact demeanor and scrappy work history were the norm in Bucktown back in 1986, the year Cimaglio and some friends opened Danny’s Tavern, a funky bar in a solidly blue-collar hood that helped usher in the area’s bohemian phase. In the mid-80s, Damen Avenue was the dividing line between Mexican and Puerto Rican gangs—not a place to buy yoga pants—and Cimaglio and his wife, Barbara, were raising their daughter Anna in a three-flat on Armitage and Hoyne.

Cimaglio stumbled upon the shuttered two-flat that would be the home of his eponymous bar while on a walk with his family. A glance through the front window revealed an abandoned bar, formerly a reputed bookie joint called Art’s Tap, and, before that, a bakery. In the rear of the place, he spotted an apartment; former first-floor tenants had to walk the line of drinkers on bar stools before getting home. But mostly what Cimaglio saw that day was an opportunity.

An aspiring musician, Cimaglio was very familiar with Chicago’s bar scene. The gregarious guitarist and singer—Anna, now 29, remembers jamming out with her dad in the basement when she was a kid—played in Eddie and the Squares, a local power-pop outfit that released the 1980 single “People People,” played Park West and other midsize venues, and shared a bill with the Waitresses. But the group never caught a break.

With his band on the back burner, Cimaglio could see his future in the watering hole tucked on a residential street. He and his wife tapped two other couples, and together they pooled $60,000 and plenty of sweat equity to rent and renovate the bar. (Even then, the building owner saw the promise of Bucktown property and wouldn’t sell.) Two friends, Angie Hebda and Karen Murphy, became bartenders; Hebda also lived in the apartment upstairs. After briefly considering the name Pete & Danny’s Truck Stop—Peter Nelson, a plumber and bartender, was an investor—they shortened it to Danny’s.

Decorated like an apartment, the bar became a comfortable spot for hard-drinking laborers and neighborhood artists, as well as the occasional celebrity. John Cusack, looking for an out-of-the-way hangout, was known to pop in on occasion. Anna still remembers special afternoons spent perched on zebra-print stools, stealing cherries and olives from the garnish tray and dropping quarters in the jukebox to spin Roy Orbison’s “Crying,” her favorite song. Decked in Elvis memorabilia and outfitted with a jukebox full of punk, rockabilly, and Sinatra, the place also reflected Cimaglio’s musical tastes.

“It was definitely risky opening the place, but we knew people would come out,” Cimaglio says. “Once the word got out, there was a crowd from day one. The main thing was we weren’t going to be a Lincoln Park-type place. We had a real cross-section of people.”

By 1994, the Cimaglios and the original investor group had begun to grow weary of the day-to-day management of Danny’s. After a deal to sell fell through, Nelson came across upstarts Terry Alexander and Michael Noone, who purchased the bar, replaced the jukebox with DJs, and used it as a launching pad for what would become the One Off Hospitality Group empire—which now includes Blackbird, Big Star, the Violet Hour, the Publican, among other well-received bars and restaurants. Soon after the sale, the Cimaglios moved to Oregon when Barbara got a new job with the Oregon Health Authority, continuing governmental work similar to what she’d done in Chicago.

On the phone from his current home in Shelburne, Vermont, where he runs the same carpentry and construction company he started during the Danny’s era, Cimaglio became animated recalling exploits from his rollicking bar days, like the time he dragged a belligerent drunk out by his tie and deposited him on the street.

“It always had a hip reputation,” he says. “I take pride in that. I liked living in Bucktown at the time, but times change, people change, and definitely, bars change. But there were some really good times.”