Execution’s Doorstep: True Stories of the Innocent and Near Damned 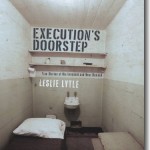 In many prison dramas, punishment for wrongfully imprisoned inmates comes at the hands of monstrous fellow convicts or sadistic guards. But in real life, the true hell just might be inside the heads of the innocent men behind bars. Execution’s Doorstep tells the stories of five Death Row inmates who were eventually vindicated and freed. Anti-death penalty activist Leslie Lytle interviewed the men, their families and their principal defenders to expose the mental anguish of those awaiting the slowly moving wheels of the legal system. Her resulting account details how over-zealous cops and prosecutors, and occasionally incompetent public defenders, conspire to place men in cells barely larger than dog kennels, awaiting death. Convicted on shaky evidence, coerced testimony and dubious claims from jailhouse informants, these men had to wait years for their appeals to be processed.

Lytle’s dry prose adds few literary touches to the inherent human drama and she does little to enliven the sluggish legal system’s machinations. But she has the benefit of working with incredible stories. Other writers have chronicled similar accounts much better, including journalist John Conroy, whose reporting for the Chicago Reader was a source for Lytle’s piece on Hobley. But detailing prisoners’ slow crawls through the courts to freedom (if not justice) are precisely the type of record an advocate like Lytle wants to leave. Like similar travesties of American justice, such as Abu Ghraib, these reports prove great evil is often simply the result of laziness, incompetence and negligence.