Mascots Talk Back: Sam the Minuteman 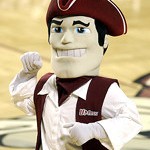 Delivering a call to arms for the fans of University of Massachusetts athletics, svelte Sam the Minuteman is ready to defend life, liberty and the pursuit of an NCAA championship at any cost. Whether it’s rooting for the football team at the Warren McGuirk Alumni Stadium or raising hell indoors at the Mullins Center, he’s always ready to get the crowd fired up.

A recent contestant in the Capitol One mascot competition and the star of a SportsCenter commercial with Andy Roddick, the colonial cheerleader is almost as ubiquitous as the Sam that graces the bottles of one of America’s finest brews. We spoke with the original patriot about being called a pirate, why the St. Joe’s Hawk is a pansy and getting hooked up with ESPN.

Playboy.com: Obviously the name gets mocked a lot. What do you say when people make fun of you?
Sam: I like to tell people it may only be a minute, but it’s the greatest 60 seconds of their life.

Playboy.com: Do people recognize the Minuteman on the street and all your important contributions to American history?
Sam: Sometimes. Lots of people who don’t know call me a pirate, even people who go to the school.

Playboy.com: Do you ever get roped into doing historical re-enactments?
Sam: Not really. The ROTC kids like to take pictures with me because I’m strong or something. They like the whole “soldiers back then, soldiers today” comparison. But that’s pretty much it.

Playboy.com: Do you carry a musket or gun?
Sam: No, the school got rid of that.

Playboy.com: Were they afraid of the Minuteman rising up?
Sam: I don’t know. I think they just wanted me to be a little more lovable.

Playboy.com: Do you have any specific rivals?
Sam: Yeah, Connecticut and Boston College. And as a mascot, I hate the St. Joe’s Hawk.

Playboy.com: I’ve heard there’s something about him flapping his arms the whole game.
Sam: It’s the most ridiculous thing in the entire world. He has to flap his arms for the entire duration of every basketball game. He gets a scholarship for doing this, and if he ever stops, he loses his scholarship. It’s ridiculously easy to do. I thought it was hard before I tried it, but it’s really easy. He even goes in for half time, so he gets to take a break.

Playboy.com: So he’s kind of a pansy.
Sam: Pretty much. When he came to U Mass last year, I stood in front of him and flapped my arm for 15 minutes. Big deal. I want a scholarship.

Playboy.com: How did you arrange the SportsCenter commercial with Andy Roddick?
Sam: We have a very good sports management program here, and a lot of the professors have been in the industry, so I got hooked up.

Playboy.com: So the Minuteman has connections?
Sam: You could say that.