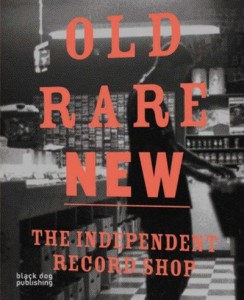 In an essay at the end of Old Rare New, music critic Simon Reynolds observes that, “used CD stores really are like the mass graves of mass culture.” It’s funny, but it also puts things into perspective. Unlike the specialty record stores held up as symbols of the cruel and unfeeling march of digital culture, used CD stores truly are commerce on life support.

Old Rare New, a massive chronicle of vinyl culture edited by Emma Pettit, arrives at a time when angst over the decline of record shopping is chronic. This well-illustrated volume of interviews and essays by critics, collectors, musicians, DJs and record store owners is as eclectic, fetishistic (and occasionally elitist) as its subject matter would suggest. The focus is on personal stories of eager collectors and dusty vinyl dens, along with their reaction to file-sharing, eBay and Amazon, the “ghost record clerk to the world” according to contributor Byron Coley. Bob Stanley’s piece, “Give Me Your Zonophone Number” dissects how previous technological sea changes like electrified studios and vacuum tubes altered recorded music. Chicago psych lynchpin Steve Krakow shares his wish list of rare vinyl, both extravagant and endearing.

Clearly, the case for vinyl’s worth has been made. In between album cover porn and photos of record stores, a chorus of those quoted in the book decries vinyl’s demise, while a handful lists the positives of the net’s unfathomable depths. Just as the surface thrills of extraordinary cover art can be a reflection of the wild music inside, the record-to-MP3 shift is symbolic of a change in the way people collect, consume and conceive music. Old Rare New dutifully documents vinyl’s past and talks about its future — which ironically includes some thriving online retail — enough to avoid being a complete requiem. It would have been a welcome addition to engage, envision or interview the digital future, no matter how over-compressed and tinny it sounds.