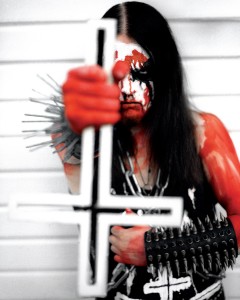 The members of the seminal Norwegian black metal band Mayhem remembered their former vocalist Dead, who committed suicide in 1991, in their own way. According to legend, bits of his skull were made into necklaces the band would later wear on stage.

The extreme form of metal music that emerged in Norway during the late ’80s and early ’90s lends itself to hyperbolic and hysterical media (first thoroughly chronicled in the 1998 cult classic Lords of Chaos). Any scene where piles of decapitated sheep heads are considered stage props and whose musicians have names like Necrobutcher and Count Grishnackh usually does. What makes True Norwegian Black Metal, a collection of essays and the work of American photographer Peter Beste, not just freakish but intriguing is that it resists tabloid urges and lets the images and artists speak for themselves.

Beste became an insider after a decade of traveling to Norway and documenting bands, and his photos are striking. Black-and-white shots of pale, scowling singers in corpsepaint and leather, walking through moss-covered woods or icy wasteland, make Alice Cooper and Gene Simmons look like cartoons in comparison. Beste doesn’t candy-coat or excuse the dark music’s literary touchstones — a blend of dark philosophy, Pagan rites, Satanism and Lovecraft and Tolkien mythology — or criminal past. His introduction discusses the spate of metal-related church burnings in Norway in the early ’90s. An in-depth timeline ties together the music’s myriad dark influences.

An essay by Slayer magazine editor Metalion talks about the origins of the movement and Dead’s violent suicide as well as the murder of bandmate Euronymous, which form a tragic thread in the story of Mayhem. “The distinction between fantasy and reality was becoming blurred,” Metalion wrote of the period after the suicide. There is little critical analysis of the actual music, so in some ways the book presupposes readers are already fans. But the strength of the personalities and images collected in True Norwegian Black Metal make it more a vivid portrait of an extreme subculture than fanboy raving.