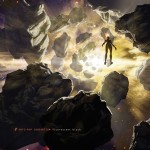 Part of the millennial hip-hop avant garde that included groups like dälek and Company Flow, Anti-Pop Consortium paired Earl Blaze’s dystopian, mechanical beats with a trio of steely, free-associating MCs who crammed complex wordplay into three-minute tracks. It wasn’t always a formula for laughs, but on their last and best album, 2002’s Arrhythmia, they showed they weren’t too forward thinking to be self-aware and self-deprecating. On the skit “Tron Man Speaks,” a robot calls into Earl Blaze’s radio show to play a single from his album, Tron Man Stigmata—basically processed static from an old Victrola—then gets testy when he thinks Blaze would prefer something “more R&B… something more for the females.”

Now reunited after its 2002 breakup, the underground rap crew returns with Fluorescent Black, a set of anxious electronic rhythms, technospeak, and knotty boasts. But joking about experimental leanings might not be as funny, since the future may have caught up with the forward-thinking New Yorkers. By their own standards, they haven’t taken a great leap forward sonically, instead becoming a more self-conscious and focused unit. While it’s tempting to imagine what next-level bangers they could aspire to, it’s also somewhat refreshing to hear them develop their angular music past the beta stage. They’re ostensibly still looking ahead, but with a bit of a retro-futuristic tinge.

There’s still plenty of abstraction, including the minimal march of “Timpani,” the digitized sludge of “Dragunov,” and the title track, which makes a chorus of squeegee-sharp synth licks sound like a nest of chirping machines. But while Arrhythmia was marked by negative space and a sense of refined chill, the tracks on Fluorescent Blank are more crowded and busy. The anxious beat of “New Jack Exterminator” competes with various strains of mechanical noise, and “Reflections” runs through arpeggiated synths before dropping into swirling riffs and drums that recall The Roots.

On the vocal front, M. Sayyid, High Priest, and Beans attack the mic more strategically here, rarely overflowing with words, as though they’re trying to cram a Nabokov novel’s worth of references and allusions into a Dan Brown paperback. During a time when Kanye West gets a hard on for Daft Punk robot masks and arguably the biggest and best in the game, Lil Wayne, raps about being from Mars and eating rivals, being a robot-loving, abstract rapper isn’t quite the mark of distinction it once was. But APC’s staccato flow can rifle through songs like “Capricon One,” and the steady grind on “Superunfrontable” compliments the track’s musical backdrop, a fat synth note that sounds like rubber melting.

Perhaps the group is making up for lost time, and the album feels a bit overstuffed and can drag at points. Tepid selections like “The Solution” and “Born Electric”—which includes a finger-tapping guitar riff and a terrible ballad that’s hopefully a joke—overindulge the robot fetish. It’s great to hear Anti-Pop Consortium return hungry, but it’s going to be difficult for them to push the boundaries that they had a large role in drawing.