Design in Detroit: A New Frontier? 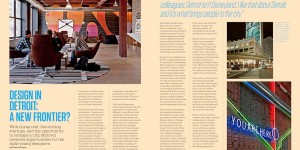 Many things conspired to bring 23-year-old designer Lyse Cook to live and work in Detroit last June. She cops to having drunk the Kool-Aid she’s heard the stories about “the Brooklyn of her generation,” the chance to make her mark in the Wild West atmosphere of a rebuilding metropolis. Someone in love with architecture, and the life and death of the American city, couldn’t pick a better place.

“I’m excited to see what’s happening in the next five years,” she says, “and I’m excited to be around for it. Think of a pot boiling: Detroit is really hot, but it hasn’t boiled yet.”

Cook has found a welcoming environment—“people are so much warmer here than they are in Portland,” her hometown— and a promising job situation. The BYU graduate was accepted into Challenge Detroit, an urban-development and leadership program. She currently works four days a week as a graphic designer and marketing coordinator for Sachse Construction downtown, then spends the rest of her time working for many of the city’s myriad nonprofits (she recently finished a project about bike parking). Excitement and potential come up dozens of times in our conversation—“I already feel like part of the change”—and her experience isn’t unique. Developments are conspiring to make Motown appealing to Cook’s peers, even as the reality of Detroit’s financial situation persists.

The Detroit Renaissance story is being written by the new businesses in Corktown and Midtown—a new Whole Foods and the slick, design-forward retail outlet from hyped local watch- and leather-goods-maker Shinola seem out of step with the narrative of a decaying, bankrupt city. That previously mentioned web of nonprofits and community development projects like Eastern Market After Dark, as well as the influx of startups on Woodward and in the Madison building, are energizing the city’s entrepreneurs. Jim Xiao, an analyst at Detroit Venture Partners—a $60 million fund investing in the city’s tech scene—says that the Madison building already boasts 20 companies after opening in late 2011, and he sees increased opportunity for auto-related technology. A local startup, iRule, just won “Control Product of the Year” at the Consumer Electronics show in January, Lawrence Tech University is opening up a design center in Midtown this year, and according to the Detroit Creative Corridor Center, jobs in the creative sector of the city are expected to grow by 11.9% between 2010 and 2018.

“It’s good to be a designer here if you’re scrappy and looking to experiment,” says Matthew Piper, community coordinator at the Green Garage, a Midtown co-working space dedicated to supporting sustainable businesses. “If you show up, will you have a job? Likely not. The economy is still a mess. We’re climbing out of a mess [that was] decades in the making. You’ll have to make a job. But there’s an opportunity to create with community- minded colleagues. Detroit isn’t Disneyland. I like that about Detroit, and it’s what brings people to the city.”

The change in job prospects for creatives is substantial from where it was just a few years ago, according to Kevin Skinner, director of design at Doner, a Detroit-based advertising firm. The city doesn’t have the pull of New York City, but it’s becoming more viable for designers and commercial creative’s looking for a career, especially millennials looking for a place to freelance and experiment. The ad industry has diversified, breaking dependency on the Big Three, and it’s “open head-hunting season,” Skinner says. It’s a stark contrast to when he graduated from the city’s College of Creative Studies two decades ago and felt like it was a ghost town.

“I have never seen this town like this,” he says. “It’s a legitimate rebirth. It’s remarkable to me. It’s like seeing behind a magic trick.”

Skinner’s firm can point to some iconic campaigns— Timex’s “Takes a Licking and Keeps on Ticking” and Tootsie Roll’s “How Many Licks?” spot—indicating a rich past, but he says that it’s boom time now. Purse strings are open and clients are shopping, providing a trickledown effect of more full- and part-time creatives looking for employment and a way to support their own projects.

“Those who see what matters are setting up shop right here,” he says. That includes one of his latest hires, Ellen Rutt, a 24-year-old freelance graphic designer and painter who makes surrealistic collages of geometric shapes and bold colors. The employment climate synced perfectly with her goals, and the energy in town, and the art scene, blew her away.

“I didn’t want to work for a company right away,” she says, talking about the thought process behind moving to Detroit. “I wanted to freelance and balance graphic design and art projects. If you let go of some of what’s ‘expected’ of you in the design world, and are interested in creative thinking, design, and art, you can make incredible things happen here.”

Rutt has been able to make it work, displaying her work in spots like the Red Bull House of Art near the Eastern Market, and pulling together freelance work. Startups in town may not have the biggest budgets, and since the volume of opportunity and people is smaller than a place like New York, you have to “make it for yourself.” But she’s always looking outward towards other markets and outof- town clients. The freedom and cheap overhead ($300 a month rent split between five friends) allows her to chase creative pursuits in the DIY art scene. (According to Naomi Beasley atD:hive, a community organization that helps people settle and find work in Detroit, rent can vary: Midtown apartments start at $450, a multi-bedroom house in Corktown might run $900, and cheaper rents are available in areas like Brightmoor and Palmer Park.)

“You can absolutely live as a freelancer here,” Skinner says. “I have plenty of friends who have never had office jobs. Everyone my age is always talking about millennials, and the entitlement thing can be baffling. But Ellen has punched her way into the gallery and street-art world.”

Designer and Detroit native Anthony Huddleston, 24, speaks of a similar transformation happening to the city during his 20s. When he left to attend the Cleveland Institute of Art in 2007, downtown was relatively slow compared to now.  Considering that the metro area lost 17.6% of its 20–24-yearolds, and a staggering 49% of its 25–29-years-olds, between 2000 and 2010, according to Census Bureau information, it’s not surprising that Detroit may have seemed less appealing to a high-school graduate.

By October of 2012, the difference was massive—there were new offices downtown, new opportunities made it possible to make a living in his hometown, and events like the Detroit Design Festival had kicked off. Huddleston feels that the city remains in a developmental phase, but that his talents can be put to better use in his hometown, where all the infrastructure isn’t in place. There are new companies in dire need of designers, he says, as well as established firms—the auto companies, the web of firms supporting Quicken Loans, the film industry, and others—looking for the same talent. It was slow going at first, and entrepreneurship can be harder in this environment, but now Huddleston’s portfolio, ranging from work for the regional chamber of commerce to branding for the Untitled Bottega art space, speaks to that variety of work. “I think Detroit is headed in the right direction,” he says, “but there’s more that we can do in terms of pushing design as an integral part of what Detroit is.”

There’s also more that can be done to make design integral to lifting up all of Detroit, not just the parts that some say are gentrifying. One thing upon which all these young designers agreed was that the story of Detroit’s resurgence didn’t begin or end with creative concerns. Basic public safety and public transportation require massive investment and improvement— snowplows didn’t cover the outlying neighborhoods during the recent January blizzards, for example, and a city government struggling to address basic concerns, including dangerously slow police-response times, is a huge concern.

Box’s eclectic resume—he works as a designer for review site Stik.com, helped open Untitled Bottega, and organized the Hopscotch Project, which turned four miles of city streets into a massive public art project—partially explains his holistic view of the city and its future. He points to a much-cited report about economic development in the greater downtown area, 7.2 square miles, while pointing out that the rest of the 142-square-mile metropolis isn’t getting enough attention. People need to come in and work with the myriad neighborhood groups to help solve some of the city’s vexing issues, Box says, and designers need to work with instead of for someone.

“There are a thousand different things that have caused the situation we’re in, and we’ll need a thousand situations,” he says.

It’s a common refrain from Detroit residents, who all seem to have a minor in urban planning, based on their impassioned discussions and debates about the city’s future. Design, and an influx of young designers, certainly can help shape and improve that future. But it doesn’t always need to be the focus. In many ways, Dylan’s story—a Michigan native, moving in from the area to follow job prospects, getting involved in social design and giving back to the city—should be the feel-good non-story of a burgeoning Detroit.

“Everyone comes to Detroit, looks at the Packard Plant and the train station…[I’m] kind of sick of the same reporting,” he says. “I’ll be happy when the reporting on Detroit is like any other city. I moved here because there was a job. Once there are more pieces like that, it’ll be a good thing.”

Lyse Cook sees that future in the distance, with more opportunities for millennial designers and those interested in the impact of design. And people are coming to the state: Census Bureau data showed that Michigan’s total population has increased for the second year in a row, and new research, like the United Van Lines migration study, showed as many people moving in as moving out. When she debated the move, Cook’s dad asked her if she was sure that she wanted to go to Detroit, but now she’s convinced. “People get pretty romantic pretty quick about Detroit,” she says. “I am. I’m a total romantic; it’s hard not to be optimistic.”

The architecture, biking to work, the chance to do design that makes an impact— add cheap booze and rent, Cook says, and she’d tell any 20-something that “we’re ready for you.” But, like a true romantic, she also was struck by a painting. Cook saw Nocturne in Black and Gold – The Falling Rocketat one of her new favorite spots, the Detroit Institute of Art—itself becoming a symbol for the city, as its esteemed collection may be auctioned off as part of emergency manager Kevyn Orr’s plan to stave off a pending bankruptcy. Though the composition—a cloudy block of black and grey, a surrealist depiction of fireworks over an industrial park, with bright splatters of gold against the night sky—is bleak at first, it’s also an easy symbolic stand-in for what many young designers feel about life in Detroit: sparks of energy and the excitement of a blank slate.