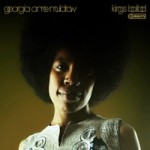 Georgia Anne Muldrow’s latest album, Kings Ballad, was supposedly crafted against the backdrop of Barack Obama’s early days in office. And just as Obama is, for better or worse, an inspiring figure whose influence isn’t quite in sync with his accomplishments, Muldrow can sometimes come across as an amazing artist in theory: She hasn’t totally delivered on the promise hinted at by her debut album, Olesi: Fragments of an Earth. It’s not her inspirations or intentions that are in doubt. But hope is a campaign, not a governing strategy; similarly, dropping spiritual signifiers and referencing legends Nina Simone and Alice Coltrane doesn’t necessarily make great music.

But Kings Ballad stands on its own, a vessel for Muldrow’s lyrics and beliefs. It sounds more concentrated, cohesive, and restrained than previous albums, especially her binge of releases last year. Soulful where she was occasionally brash, her voice pivots and floats but sounds more grounded and assured, like on “Doobie Down”, where she calmly vamps over her own coos and chorus (“No apologies, I’ll be as black as I want to be”). It flows well, outside of a final stretch of songs seemingly tacked on for variety, including vaguely Latin “Morena Del Ray”, vocoded sci-fi riff “Industrial Bap”, and the senseless pop-punk outlier “Room Punk!”.

Throbbing low end plays well with jazzy piano throughout the album, like the riff on “Indeed” and the elegiac, descending line on “R.I.P.”, an ode to Michael Jackson that achieves a certain tension by ending on a snapped beat. The instrumental passages, including the liquid funk-lite of “Chocolate Reign” and chugging “R.I.P.”, are decent. Her beats aren’t the most adventurous take on splashy, one-two rhythms, but they work here. Kings Ballad still doesn’t meet all the expectations Muldrow may have initially inspired, but it’s a positive, measured sign that there’s more to come.