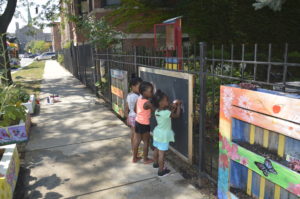 The South Merrill Community Garden on Chicago’s South Side fills a literal hole in its community. Slipped between between two brick apartment buildings, the small plot was established in the 1980s by neighborhood residents in the predominantly black part of town, who created a small flower garden using bricks from a demolished building. In 2010, area students took over, using the garden to memorialize Troy Law, a local child killed as a result of domestic abuse.

The garden fell into disuse a few years later, weeds overrunning the soil. In 2012, shots rang out as someone was chased through the overgrowth. No one was hurt, but the errant fire galvanized a group of residents to get rid of the eyesore.

Frustrated by the violence in the surrounding South Shore neighborhood, and in the city at large, neighbors reclaimed the land, laying down stone paths and sowing flower and vegetable seeds.

Last summer, this small garden also became a testing ground for an experiment in crime prevention. Thanks to the Chicago Safe and Peaceful Communities Fund, a “rapid-response” charitable initiative giving seed money to communities suffering disproportionately from crime, the garden received a small stipend to run a Saturday program for kids, Planting and Playing Summer Garden Arts. One of 121 small grants, the funds provided an entire summer of Saturday activities for neighborhood kids.

“We’re helping to establish a bit of well-being,” says Natalie Perkins, the gardening group’s education coordinator. “It doesn’t mean that everything stopped, or people won’t be shot.”

Community gardens, and other neighborhood-level organizations like block clubs and arts groups, aren’t typically viewed as direct solutions to violence. Decades of ”broken window” policing persuaded many cities to adopt top-down crime-prevention plans focused on punishing small offenses (recent research, however, indicates that this strategy had the opposite effect).

Instead, a growing body of evidence suggests that community groups have actually played an outsized, and under-recognized, role in the significant decline in urban crime across the United States and that programs that benefit local, bottom-up urban organizing may be the solution.

According to a recent study by New York University sociologist Patrick Sharkey, these groups were “fundamental” to the massive nationwide drops in crime over the last 25 years (the national homicide rate, for example, shrunk by 50 percent between 1990 and 2015). His work even determined a formula for their impact: Every 10 additional organizations in a city with more than 100,000 residents creates a 6 percent drop in violent crime, and a 9 percent drop in homicides.

In line with the growing consensus, the SPCF’s work is swift and strategic; it’s community action at the street level. Over the last two years, a coalition of 30 charities and foundations pledged more than $1 million to underwrite small, community-oriented grants between $1,000 and $10,000, part of a $30 million investment in strategies to reduce gun violence.

The grants will support temporary programming and events to increase neighborhood unity and safety in under-resourced Chicago neighborhoods, like Englewood, Auburn Gresham, and Austin, located on the city’s majority-black South and West sides. The funds also empower local actors already working in their communities, doing away with long vetting processes required by some nonprofits and one-size-fits-all solutions.

Before the SPCF grants came along, Perkins says, its group would have to invest time in fundraising to even dream of adding programming. The grant enabled them to employ additional artists and assistants to help all summer.

No one expects these grants to eliminate violence on their own. In Chicago, many other community-based violence-prevention groups and local initiatives have contributed to recent declines in Chicago crime. But the SPCF, and programs like it, may be doing something even more important: addressing, as they describe it, the “preconditions of violence” and attacking the systemic issues that lead to crime.

“The public perception, often reinforced by the highest levels of government, is that residents aren’t doing anything about violence in their neighborhoods,” says Robert Sampson, a Harvard sociologist who has studied Chicago for decades. “The fact is, they face tremendous odds, especially in disinvested and segregated neighborhoods. The power of social ties here shouldn’t be overlooked.”

The Safe and Peaceful Communities Fund traces its lineage to a tradition of community-oriented urbanism and sociology that’s been around for decades, says Sampson. His years of research in Chicago neighborhoods culminated in his 2012 book Great American City: Chicago and the Enduring Neighborhood Effect, which backs up the consensus that social groups—family, peers, and other institutions—are important predictors of crime.

Police aren’t, and can’t be, on every corner; community ties, reputations, and bonds to others make the difference when it comes to crime and violence, Sampson says. That’s why community groups, which strengthen all three, are so crucial to the story of neighborhood improvement or decline, often playing the role of unsung hero.

In the last few decades, systematic work, like NYU sociologist Sharkey’s study and Sampson’s detailed research in Chicago in the 1990s, has documented the power of neighborhoods and communities in a more rigorous, concrete fashion. It offers scientific support of the idea of “eyes on the street,” the concept, championed by urban theorist Jane Jacobs, that people feel safer on active, busy, and continuously occupied city streets.

While, like other cities, Chicago had experienced a significant drop in crime since its peak in the ’80s and ’90s, 2016 still saw 4,368 people shot and 764 killed. That summer was the backdrop against which the SPCF was formed, according to Kimberley Rudd, a communications specialist who works with the Chicago Community Trust. Shootings usually spike during warm weather in Chicago. To keep kids safe and occupied, various foundations, including the John D. and Catherine T. MacArthur Foundation, wanted to quickly provide small grants to community-based groups to add additional programming and events.

“A lot of foundations are doing things in this space,” says Anna Lee, a program officer for the Chicago Community Trust, a foundation that helped organize the grant program. “We knew it was important to remove some of the barriers.”

Devised in the spring of 2016, the rapid-response fund distributed money to more than 100 community groups, mostly on Chicago’s South and West sides, to support programming for the following Labor Day weekend. Activities were varied, split between community gardens, block clubs, dance lessons, and musical groups. To aid smaller groups, including many that weren’t registered as 501(c)(3) nonprofits, normally a barrier to accessing foundation money, the SPCF paired them with financial sponsors.

“The idea was, can we keep them safe this weekend?” says Rudd. “It was proof to show the foundations what could be done.”

These efforts in 2016 and 2017 coincided with other community-based programs and interventions in the city focused specifically on violence, such as Chicago Cure Violence and Ceasefire, as well as new strategic initiatives by the Chicago Police Department. Their results also support the idea that empowering actors in local neighborhoods offers a better solution than outside programs or agendas.

“These studies recognize that community organizations and local actors have influence,” says Charles Ransford, director of science and policy for Cure Violence, an organization that treats violence as a health issue. “Violence is essentially a behavior. Coming from the outside with answers doesn’t always work. But working from a place of understanding, with familiar people, is a better way to change behavior.”

According to Max Kapustin, a research director at the University of Chicago Crime and Education Lab, the impact of one particular social program can be notoriously hard to study without being able to set up a randomized control trial. In the case of crime-fighting strategies, that’s not only problematic, but unethical; which neighborhood becomes a placebo?

But the evidence so far does suggest that community support and focus, rather than relying solely on crime suppression, makes a big difference. Among the strategies being used by the CPD, such as Strategic Decision Support Centers, which use high-tech solutions like ShotSpotter to track crime and gun violence, community policing has been a focus of its efforts.

Kapustin says that while the crime lab found the SDSC in Englewood, for example, had a big impact, it’s still too early to say exactly why. His colleagues hypothesize that crime suppression had something to do with it, as did greater community engagement.

As the program raises money and makes plans for 2018, Lee says that despite mixed results, they can count some successes. Englewood, a neighborhood associated with a recent spike in violence, saw the most applications for SPCF grants, and has recently experienced a downtick in violence.

An assessment of the SPCF’s first year by the Become Center suggested that it may need more time, and funding, to make a real dent in local violence. It didn’t “prevent immediate violence,” but did “promote and begin to build peace and hope,” establishing a case for making these grants more permanent.

“They may be seen as non-crime issues,” says Sampson. “But getting a playground, providing supervision for kids, isn’t about about crime per se, but it has much larger consequences.”

Perhaps more importantly, the results of the SPCF grants speak to the power of agency. Too often, underserved and under-resourced neighborhoods get blamed for problems in their communities, and to alleviate them, they are forced to use tools that others devise. Letting residents have a hand in designing and implementing change offers an empowering, and effective, solution.