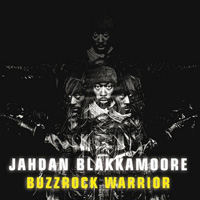 Jahdan Blakkamoore’s solo debut begins with familiar sounds: a coy flute melody, a clapping cadence, and then the sub-aqueous bass notes of Baby Kite and Nokea’s “Reef”, the slow burner that kicks off DJ /rupture’s Uproot mix. The track– co-produced here by Rupture and Matt Shadetek and rechristened “Get Hustlin”– is a shot across the bow from the Guyana-born Brooklyn MC. That opening selection might be broadcasting intentions, suggesting this heavyweight hybrid is another the-music-world-is-flat spin on bass culture.

Buzzrock Warrior doesn’t reach that plateau, but it does due diligence, rattling with digital bass and opening the floor to showcase the headliner’s vocal talents. Co-produced by Rupture and Shadetek with a roster of collaborators, the music here drives but doesn’t dislodge the bassbin, mostly settling on sleek, polyglot rhythms, some of which have been floating around for months. “Go Round Payola”, a Shadetek joint that originally came out last year, is a restless bit of fizzy, 8-bit energy. “Let’s Go”, by cumbia artist Chancha Via Circuito (Pedro Canale), rides jazzy cymbals and bass in a tight but shuffling rhythm. “Earthshaking”, a dirty shuffle produced by Brazilian Maga Bo, drops plodding low end over the sound of sizzling electricity, and Modeselektor’s “Dem a Idiot” fuses strings and depth-charge beats into a midtempo burner. Buzzrock is positveily laid-back compared to something like the Bug’s London Zoo.

Blakkamoore’s delivery gets plenty of room to flex, pointing to a promising talent who can bridge margins and is at home with dancehall-style riffs, dub-friendly pronouncements, and sweet harmonies, vital in a free-flowing exchange of global rhythms. He doesn’t fully rise to the occasion, however, delivering a dexterous but not truly memorable performance that favors delivery over content. Blakkamoore bounces between loose and languid duets (“Rise Again”), duels with gruff MCs and soulful material such as “Come With Me”, where he recounts his immigration experience– staying with family as his parents worked and saved for his trip, his first snow storm, and middle-of-the-night quizzes so his story would be straight for U.S. customs officials. But his voice occasionally gets saccharine. Fired-up lover’s ode “She Said”, with pace-setting bass riffs, burns out, and the slack groove of “The General” is tweaked too far with Auto-Tune. On “Get Hustlin”, he smoothly lays down rote and unremarkable lyrics, and “Mesmerized”, a muddle of world-in-peril lyrics, is redeemed by Blakkamoore’s alternately sweet and gruff wordplay while trading off lines with grime MC Durrty Goodz.

Combining too many flavors can often dull the final results, and while this album is far from bland, it also lacks a compelling identity or strong message. A decent set of global grooves isn’t bad, but Brooklyn internationalist Blakkamoore sounds poised to achieve more.