Meet Jabber Jury Founders Kevin Wielgus and Angelo Rago: GAVEL NOT INCLUDED: Introducing a virtual tribunal where you can weigh in sans summons 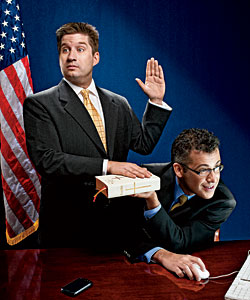 It’s fitting that a website about arguments emerged from one.

In the fall of 2009, the Chicago tech entrepreneurs Kevin Wielgus and Angelo Rago were at the Improv in Schaumburg when Rago’s then-girlfriend, whom he’d been dating for only a few weeks, received a phone call: Her parents were headed to the hospital. She rushed off; he stayed for the show.

At a bar later that night, Rago began receiving angry text messages: He was insensitive; his true colors were showing. Rago was amused. His girlfriend’s father had a bad case of hemorrhoids—hardly life threatening. Rago knew she was telling friends about how terrible he was, but from where he was sitting, he was in the right. Wielgus concurred. “I bet everyone in here would agree with you,” Rago remembers him saying. They then told the story to a crowd of fellow patrons, observing how the general opinion shifted as details emerged.

The situation inspired the duo to create Jabber Jury, an online courtroom that draws from such pop culture concepts as TV’s Tosh.0 and The People’s Court. They call the model “conflictainment.” Both parties in an argument—anything from husband-wife bickering to whether a friend dresses inappropriately—submit videos explaining their sides. The videos, uploaded to Jabber Jury’s proprietary system, form the basis of a case, and each party can add rebuttals and invite witnesses to submit video testimony. Registered users can leave comments, spread the case via social media, and vote on the outcome.

“We’ve all been guilty of being the voyeur and listening in on a couple at the next table,” says Wielgus.

The 36-year-old serial entrepreneurs met in 2001, when they collaborated on BarBux, a now-defunct company that created a prepaid currency to sell drink specials. (They later realized they’d both attended Maine South High School in Park Ridge but never crossed paths.) After the initial brainstorm, they toyed with Jabber Jury but didn’t get serious until last summer. A round of funding from friends and family, along with a $1.2 million investment from the Florida firm Lightwater LLC, gave them momentum enough for a launch scheduled for December 2010.

While online video usage is rising (50 percent of web users watch online videos at least once a week, according to Adweek), there’s no guarantee Jabber Jury will click in a crowded, fractured media environment. Targeted ads on Facebook will be constantly tweaked to draw users based on traffic patterns and popular case topics. New users will be awarded points, redeemable for rewards and prizes, and can earn more through their activity on the site. Ads on the site will be tailored to demographic profiles, case content, and voting records. Rago and Wielgus theorize that Jabber Jury’s infrastructure could make it a social hub for arguments and a way for companies to solicit consumer feedback beyond online polling.

“If we’re all set up, there’s no reason to reinvent the wheel,” says Wielgus. “It’s a consolidated user base ready to follow the user pattern of three Vs—video, video, and vote.” Plus, who doesn’t like a little salesmanship?