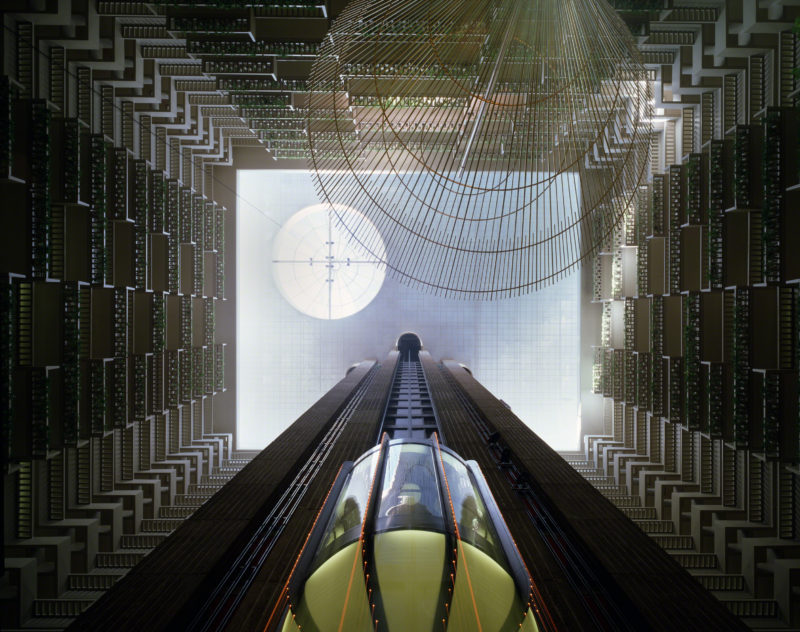 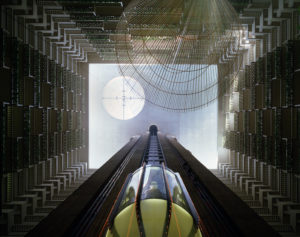 It’s fair to say Andrew Young understands the South, and the city of Atlanta, better than most. A longtime politician, pastor, activist, author, and ambassador, Young successfully ran for mayor at the behest of Coretta Scott King in 1981, earning the right to boast that he led a city that had once put him in jail for civil disobedience. With such a deep background in politics and civil rights, he knows exactly how far Atlanta, especially the downtown, has come since the ‘60s. “When I moved to Atlanta in 1961, the tallest building was about 20 stories,” he said. “There was almost nothing downtown. It was as if the city still hadn’t quite recovered from Sherman burning it down.”

A decade later, parts of downtown were beginning to buzz again, he says, thanks in part to the work of a maverick architect and developer named John Portman, Jr. In an era which saw Americans flee cities towards the endless sprawl of safe, ready-built suburban housing, Portman placed bold bets on urban revitalization. “Architecture is about life, and it all comes back to people,” he said. Decades before the urban exodus flipped into today’s mad rush for downtown real estate, the designer chose to redevelop in neighborhoods others had written off.

His urban projects were megastructures, massive developments, shopping centers and hotels such as the Peachtree Center, Merchandise Mart, Peachtree Plaza, and the revolutionary Hyatt Regency Atlanta. Opened in 1967, the stunning space blew apart (and blew open) previous notions of boxy, rectanlinear hotel design. The huge, open 22-story atrium was something very different, a blend of Italian piazza, neofuturist monumentality, and soaring balconies lined with ivy. Guests in the ‘60s lined up by the hundreds just to ride the glorious glass elevators—at $35,000 per cab, the custom systems were the most expensive in the world.

Famous hotelier Conrad Hilton, who rejected an opportunity to partner on the project, said Portman’s idea was “a concrete monster that wouldn’t fly.” But for guests, the trip up the glass elevator was absolutely thrilling. According to a New York Times article about the hotel’s opening, the ride “gives one the feeling, at least the first time around, that he is an astronaut soaring up a gantry at Cape Canaveral, if not already in the first stage after blast off.”

Before Portman, “we had no downtown Atlanta,” says Young. “There was very little street life, very few restaurants. Now the Polaris Restaurant, the blue dome that sits atop the Hyatt, has become a symbol of a new Atlanta.”

John Portman’s work from the ‘60s, ‘70s, and ‘80s can be found across the country, but the common denominator is how the mixed-use projects sought to bring energy back to cities at a time when many were turning their backs. Portman and his firm would go on to create a series of projects with massive atria, public art, and thrilling interiors, including the Renaissance Center in Detroit, a city-within-a-city on the riverfront (1977) and the Hyatt Regency San Francisco (1973) and the sprawling Embarcadero Center in the Bay Area.

Years later, Portman’s work often gets criticized for the way these grand interiors wall themselves off from the rest of the city, turning their back on the sidewalk. One critic called one of Portman’s project “a temple of hermetic urbanism” and “self-contained sci-fi,” a somewhat fitting comment, since so many of his buildings have provided futuristic backdrops for films.

But Portman didn’t set out to shut people out. He spoke of decongesting the city, creating new town squares and meeting places, and bringing people together, all at a time when the stereotype of urban America could be summarized in the bombed out, Bronx-is-burning hyperbole played up in the press. He looked at his Marriott Marquis project in New York’s Times Square, developed when the area was still considered seedy, as a sort of “urban lung” in the midst of a crowded, hectic neighborhood.

“Sometimes, I’m not sure where the idea of his project having an inward focus comes from,” says Mack Scogin, a principal at Mack Scogin Merrill Elam Architects and teacher at the Harvard Graduate School of Design. “His ideas are all about enriching the urban environment, of contributing to and even re-inventing the urban fabric.”

Portman’s vision for the future may be singular, but it always looked at the city with optimism.  A.J. Robinson, a former President of Portman Holdings who currently works for Central Atlanta Progress, says his boss believed in revitalization.

“He thinks of the central core as being the heart of the city, and if the heart functions well, and circulates its energy out to the rest of the city, it’s doing its job,” he says. “They older city centers didn’t quite need a transfusion, but needed to be enhanced.”

Portman changed the look of Atlanta, and other cities around the world, by doing things a little differently. After serving in the Navy and graduating from Georgia Tech in 1950, Portman was drawn towards architecture, and started his own firm in 1953, John Portman and Associates (it’s now part of the Portman Family of Companies, which also includes Portman Holdings). He quickly came to the conclusion that that the best way to make an impact was to be both an architect and developer, as well as a self-starter.

Beginning with his Merchandise Mart (now AmericasMart) in 1961 and Peachtree Center in 1965, he began reshaping a vast swath of downtown Atlanta; Peachtree Center now encompasses 10 buildings and 19.6 million square feet, including skyways. Architects at the time were displeased that he was operating as both developer and designer, creator and client, and the AIA and other organizations gave him a cold shoulder.

But Portman, an “artist and architect,” felt the unique arrangement allowed him to pursue a progressive view of Atlanta and take risks, building projects that others couldn’t. Decades later, architecture critic Paul Goldberger agrees with Portman’s assessment, noting in the film John Portman: A Life of Building that his work and success encouraged developers to be more risky, and champion more unique buildings.

“He pulled himself into the development business,” says Young. “Nobody gave him $100 million to get started. He scrambled his way up the ladder.”

As Portman began creating some of the big developments and megastructures that would define his career, a side project for the local public housing authority provided a template for some of his most revolutionary work. Commissioned to build the Antoine Graves senior center for the city of Atlanta in 1965, Portman developed a people-centric approach to design. Residents expressed interest in adding a porch, which they treasured as a space for socialization. Portman took the outside in and added a massive atrium to the core of the structure, preserving a space for interaction, with the added benefit of increasing shade and air circulation. This project became a model for the Hyatt Hotel.

“The front porch was the lifeblood of seniors in that area,” says Young. “I liked the sensitivity he showed with that project.”

This concept would be central to Portman’s expanding body of work, including the Hyatt Regency San Francisco, an inverted pyramid that still stands as the world’s largest hotel lobby, The Westin Bonaventure in Los Angeles, and the Renaissance Center in Detroit, filled with vast, cylindrical common spaces more futurist than anything coming off the assembly line of the city’s carmakers.

Portman, an architect as well as an artist, whose sculptures occasionally decorated his buildings, had a unique vision of cinematic interiors. Blending the monumentality of Louis Kahn, the organic shapes of Frank Lloyd Wright, as well as a healthy appreciation for the European model of a town square, he created interiors that still stand as some of the best physical examples of what could be called a retro-futurist aesthetic (this forward-thinking vision explains why, beginning in the ‘80s, the Portman firm has had such great success in budding metropolises in China and Asia).

What sets his projects apart is a focus on movement. When he was asked by the New York Times to define his early influences, he named Tivoli Gardens, the Champs-Élysées, and Alhambra, public spaces and palaces built with flow and progression in mind.

“Buildings serve the human being, not the other way around,” he told The Atlantic. “I don’t think architects have spent enough time thinking holistically about how architecture affects people.”

In 1976, Portman wrote “The Architect as Developer,” discussing how modern city planning had failed, and how the architect needs to re-engage the public. Many have said his buildings don’t quite living up to this vision, and create distinct, privately controlled space. The Renaissance Center stands apart and separate from the surroundings. The Bonaventure in Los Angeles and its series of skyways can be a maze to navigate. In New York City, his Marriott Marquis in Times Square, which was completed in 1985, towers above the square without truly connecting, with a lobby and bar suspended on the 8th floor. However, some critics, including Goldberger, who severely criticized it when it opened, have noted that the momentum for redevelopment that has now led to increased investment in the pedestrian experience around the neighborhood only happened after the Marquis opened.

While Portman’s architecture has been influential—he basically invented the atrium hotel, and his firm currently works on projects around the globe—his impact on city planning and urbanism can perhaps best be understood as an optimistic vision for its time. When others were walking away from downtowns, Portman said that we don’t have to ditch them, we can rebuild them.

“His buildings were designed to make people secure and comfortable, but they were also inspirational,” says Young.

The lobbies, atria, and megaprojects Portman created were cities within cities, stunning versions of a new type of town square. In some ways, his work can be appreciated for delivering an early preview of the urban future, though all too often in self-contained episodes.