Out of the Lab: Stereolab chanteuse Laetitia Sadier aims for indie-pop simplicity in her debut solo effort, The Trip 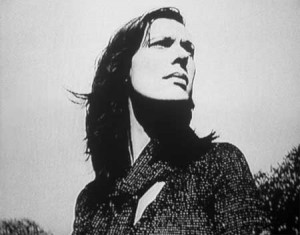 A bedrock element of Stereolab’s continental cool, Laetitia Sadier’s voice is unmistakable. Hearing its breadth of variation on The Trip, from the “grey disco” of her “Un Soir, Un Chien” cover to the languid “Natural Child,” reveals the depth and fluidity that can be uncovered in a new context. For her first solo album, Sadier experimented with a new setting while keeping a foot anchored on comfortable ground, splitting recording time between Emmanuel Mario in the UK, who worked with her group Monade, and lo-fi singer/songwriter Richard Swift, who opened for Stereolab’s last U.S. tour and works out of his Portland studio.

With a philosophy that aims to “take photographs rather than make a painting,” Swift set up his studio as a spontaneous, low pressure environment. Swift, who played drums and guitar on many tracks, Sadier, and other contributors to the Portland sessions worked together in one open room, without talkback. Directness and simplicity were key; only about a dozen tracks were used for each song, and while Swift admits there’s some ear candy on the record, the team was more focused on stripping back and streamlining. Synthetic pulses and film score atmospheres coexisted without crowding out the music.

“It’s a really loose recording situation,” says Swift. “Half the time we’re actually listening to records [Tom Tom Club was a favorite], talking and hanging out. I’ve always felt you need to create an environment where the clock isn’t ticking, it’s loose, and you can work where you want to. I’ve always gotten the best results that way, rather than hammering it over take after take and working yourself half to death.”

Sadier arrived last fall and started working on the song sketches she had previously sent Swift, vague references that they would develop into real, desirable shape. Though Swift prefers straight analog recording, he worked in Pro Tools for this album to make it easier to integrate recordings from other studios. He still sent tracks through analog gear, such as a Roland Space Echo, Empirical Labs Distressor, and an Altec amp/mixer, to give them a bit of warmth.

“Everything was there in Richard’s studio that I needed to make the sounds I wanted to,” says Sadier. “Richard doesn’t have a ton of gear; just the necessary ones of good quality, which he knows inside out. He’s aware of the type of acoustics his studio has and knows how to get the best out of it. He is very creative and soulful, and came up with many ideas as we went along.”

The stark beauty of The Trip comes from the way the unencumbered songs breathe and flow. True to Swift’s style, and reflective of the final product, most everything he recorded came from second or third takes, including Sadier’s singing. “I didn’t comp any of her vocals,” he says. “No Auto-Tune; she’d just sing, start to finish. There’s a real arc to the emotion she’s conveying.”

Sadier aims for an open, relaxed, and warm sound, and her performance here—which ranges from the emotional “One Million Year Trip,” about her sister’s suicide, to a subdued version of George Gershwin’s classic “Summertime”—sounds natural. Her voice was simultaneously recorded with Shure SM58 and ADK S7 microphones, run through an AKG BX-10 reverb. “With that setup, I was able to pan the reverb and print it to tape,” says Swift. “I love how reverb sounds printed to tape. The vocals sound consistent, even though they were recorded on two different continents.”

Swift also utilized extensive reverb on the background vocals, which included his own falsetto and contributions from Rebecca Gates of the Spinanes. The trio recorded a lot of three-part harmonies, and due to the women’s somewhat deep voices, it was sometimes hard to tell who was singing. “With these ghostly background parts here and there that come in for little moments and work like strings, in a very orchestral way, the record felt a bit haunted in a sense,” says Swift. “We kept saying it sounded a bit like the ghost of Laetitia’s sister.”

Swift framed the vocals with subdued, yet driving and diverse instrumentation. From the lounge feel at the end of “Natural Child,” achieved with a soft touch on drums, subtle transitions, and lilting guitar chords, to the way the drums are a little low in the mix, creating atmospheric space in a fashion similar to a Serge Gainsbourg record, it’s unobtrusive, yet compelling.

“I’m very spatial in the way that I mix,” says Swift. “It gets a little too confusing to me when I don’t know where the music is coming from—‘oh, there’s a dry snare drum a foot away from my face and a guitar panning from left to right for no reason.’ I like minimal, specific, and focused sorts of sounds.”

When he’s recording the drums, Swift uses minimal miking techniques, often using just a single overhead. For The Trip, where drums were set to the rear, he used an SM7 or Coles ribbon overhead and occasionally an SM57 on the kick to give it a little extra power. “I know the drum kit and the gear well enough to play to the compressor,” he says. “I know how to play to the EQs, which it makes it slightly easier.”

On “One Million Year Trip,” Swift added a quick, tuned slapback delay on the overhead drum mic, which created a metallic pulse that courses through the first three-quarters of the song.

On bass, Swift split the signal from a mid-’70s Peavey Bass with a DI and ran one signal direct and one very dirty via a Fender Deluxe guitar amp modded with a Vox AC30 speaker and a spring reverb, and he EQ’d out the low-end phase and overtones. “I tend to think of more reverb-heavy bass as something that’s more like what they were doing in the ’50s and ’60s, says Swift.

Sadier shared a “prepared-piano” technique that she picked up from Monade/Stereolab bandmate Julien Gasc, which added a haunting sound to “Statues Can Bend”: applying duct tape to the piano strings to mute them, then close-miking and compressing the sound.

Sadier and Swift’s intricate approach to The Trip succeeded, in part, because they created the right atmosphere. While the album has many serious moments–“there’s some heavy subject matter; I think she probably had to exorcise some ghosts, in a way,” says Swift–Sadier still sounds adroit and fluid.