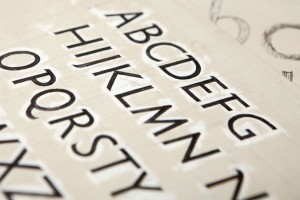 Even in the age of streaming video, the vast majority of the information we consume online is in the form of type. While sophisticated typography may be a given in an era of web fonts, a new exhibition from famed font and imaging firm Monotype showcases the painstaking artistry behind the classic typefaces we see on screens everyday.

“Pencil to Pixel,” which runs May 3-9 at New York’s Tribeca Skyline Studio, connects historic, handcrafted fonts and hot metal typesetting to the contemporary type displayed on handheld devices. More than a century of artifacts drawn from the Monotype’s archives in Salfords, UK, will be part of this rare display, including drawings by Eric Gill, creator of Gill Sans, production pieces from Helvetica, original drawings of Times New Roman commissioned for The Times of London, as well as concept art, photos, and metal and film masters. It helps “tell a story about how the design of typefaces is informed, constrained, and even enhanced by technology” according to Monotype type director Dan Rhatigan.

“It’s an opportunity to see the hand of the author,” says James Fooks-Bale, Monotype’s director of marketing, who helped curate the exhibit. “A lot of designers are familiar with the tick-down menu in Adobe and aren’t familiar with the fact that it came from someone’s hand. Consider that in Salfords alone, the original Monotype plant built in 1897, there were once 1,000 people at work designing typefaces. The precision engineering apprenticeships there were considered second only to Rolls Royce.”