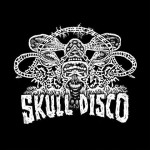 Dubstep has spawned a surfeit of producers in search of the most brutal bass possible, but few have created music as tense as Sam Shackleton. Producer and proprietor of the highly touted Skull Disco label, Shackleton has created a singular body of work that often transcends the genre altogether. His music is sparse and mystical, an audio desert bleached bone-dry and colored with only the occasional swirl of melody. In October, Rough Trade picked up Soundboy Punishments, Skull Disco’s double-CD collection of Shackleton’s label highlights and rarities, for US release. Earplug’s Patrick Carl Sisson coaxed the sometimes attention-shy artist into an interview by email; from the results, it’s evident that the man chooses his words as carefully as he crafts his beats.

Earplug: What’s the status of Skull Disco?
Sam Shackleton: Doing well, but our releases are sporadic. If it feels right, we’ll do it. About 18 months ago, I felt disillusioned generally and had a bad time personally and felt like packing it in and doing something else — but now I’m very happy with it, as it seems to have established itself as something that stands on its own.

EP: The very stoic lyrics of “Blood on My Hands” reference 9/11, but they also seem to have a kind of timelessness to them. Was that intentional?
SS: They aren’t meant to be throwaway, but, by the same token, I think that they have been given further weight by the amount of exposure the Villalobos remix gave the track. I wrote those lyrics in my old band, Evil Mastermind, and no one remembers them because we only ever played to one man and his dog.

EP: What projects are you working on now?
SS: I’m learning how to use some hardware. I really want to develop my sound and find something that I’m happier with. I’ve made a few tracks that will come out on Skull Disco that are really slow and sparse compared to what I’ve done so far. They’re getting remixed by a few people who I respect musically. The remixes so far, by Pole and Badawi, have been great.

EP: Many of your tracks sound like they’re referencing African and Middle Eastern music. When did you originally discover these styles, and are you curious about the culture and religious beliefs behind these types of music? You once said that music is in the sacred realm…
SS: When I say music is in the sacred realm, I mean I don’t want to adulterate it for the sake of making it easier to listen to or more comprehensible. I don’t deliberately reference African or Middle Eastern music; I just use sounds that I like and beats that sound good to my ears. Chances are that if you played my stuff to someone from that background, they would also find the music alien to them and say that it’s obviously Western. Don’t misunderstand me — I do like lots of music from around the world. I also know that music at its best can touch emotions really strongly and make you feel transported to other places, and, of course, that’s something that I aspire to — but I wouldn’t want to claim some heritage to it that isn’t there.

EP: You once worked on a punk fanzine. What was it called? Do you think the characteristics that attracted you to punk also attract you to production?
SS: Yes, but it was punk in the loosest sense really. It was called Butterfly Stomach, after a Fall lyric. There’s an energy that I’ve always had and I think this fires my production today. Probably this same energy tapped into punk, too.

EP: How would you describe the music you were making with rapper Tenfold Vengeance?
SS: It was our take on dancehall, with a Zoom drum machine and with lyrics musing about corporate art, death, and animals and their characteristics. They were some of the best times I’ve ever had. I’m still in touch with Tenfold and he’s got vocals on two of my new tracks, “The Rope Tightens” and “Death Is Not Final.” He lives in a different country, so we don’t hang out as often as I’d like, but we’ll always have a connection and we’ll collaborate more in the future.

EP: Your recent remix of Simian Mobile Disco’s “Hustler” is the closest you’ve come to making house or techno. And that bass!
SS: To be honest, I was really pleased to get a chance to do a straight kick pattern without feeling like a bandwagon jumper. The bass sound, for me, is simplicity and necessity. A nice, pure sine wave does it for me, as I use Reason and don’t like any other sound from the synth. I just got a Moog though, so that might change.

EP: Can we expect more in that style from you?
SS: The next Skull Disco single, “Death Is Not Final,” is totally percussion driven, with a straight kick running at 120 BPM. You can hear it on Mary Anne Hobbes’ show [on the BBC], as I did the guest mix a few weeks ago. Most of my new stuff is running at 120, actually. I needed to break up my approach a bit — and also because I felt very awkward with the dubstep tag. The great thing is the B-side of the track, a remix by T++ [aka Torsten Pröfrock, aka Chain Reaction’s Various Artists]. It’s absolutely brilliant — no gimmicks, nothing cheap, just really pure sounds. Exactly the music that I want to hear.