The Austrian-born, typography-tweaking graphic designer takes a stark view on what makes us tick in his latest exhibition, The Happy Show. 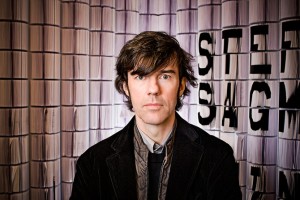 For an art installation that examines what makes us feel good, Stefan Sagmeister’s The Happy Show, on display at the Chicago Cultural Center through September 23, doesn’t stay fixated on the sappy and upbeat. A Blaise Pascal quote (“All men seek happiness… This is the motive of every action of every man, even of those who hang themselves”) as well as a disclaimer at the entrance (“if you regularly weep into your pillow at night, visiting won’t keep you from doing so”) paint a less alluring picture of our collective mental state than the designer’s punchy typography, infographics and videos, hung on bright yellow walls.

Sagmeister, the Austrian-born, award-winning graphic designer who currently heads NYC-based firm Sagmeister & Walsh, doesn’t shy away from displays that incite—his famous 1999 AIGA lecture poster featured text carved into his torso. But in our discussion of his current exhibition, Sagmeister asserts that he’s just being honest. He brings this combination of bluntness and charm to The Happy Show, a concept that came to fruition during a year-long sabbatical (Sagmeister takes a trip every seven years to recharge) to Indonesia in 2008.

We spoke to Sagmeister at the opening reception to The Happy Show in Chicago about what the exhibit has taught him, and how his non-scientific self-experimentation lead to confusing results.

How has doing this project, and seeing the exhibit in different cities, changed your impression of happiness?
It began with the idea of doing a documentary film. It seemed like a juicy project, because I knew it would force me to do proper research that I wouldn’t do on another project. Some of these books are too difficult to read, some of these people would be too difficult to get to—I knew I wouldn’t do it if I didn’t have a reason. At the beginning of the documentary film, I already had a touring show of our graphic design pieces in Europe, and I didn’t want to do another one, so the idea came up, ‘Let’s do a show in conjunction with the film.’

The film is still going to be called The Happy Film. It isn’t finished yet, maybe by this spring, that’s the best-case scenario. What I always said in the beginning was, even if we do make a terrible film, which is still possible, the hope is the journey is going to be interesting. And that proved very much to be the case. The work on the film and the show very much colored my last three years in all aspects, from the insights I gained reading, from the people that I’ve met and wouldn’t have met otherwise, and at least as importantly from the experiments that I tried.

Did you try the psychosomatic drugs experiment laid out in the exhibit as a means to become happier?
Yes, I did.

And how did that work out?
There were three things that we tried out. First, there was meditation, then cognitive therapy, then drugs. All will be in the film, but by and large, it turned out to be the opposite of what I expected. I thought the meditation was going to be the strongest, and the drugs, based on what I had read, the weakest. The prevailing thought was if you’re not depressed, they won’t do too much, and I found out that wasn’t the case with me. I found they did quite a lot. It’s all a self experiment, and it’s really interesting because it’s all happening to you. It’s personal, but at the same time, it’s not scientific, because you don’t have a control group. It’s the experience of one, but of course it’s immediate, nobody needs to tell you about it. And two weeks into my drug experiment, I happened to fall very much in love with a beautiful woman, and that skewed the whole thing.

I imagine you’re a pretty happy guy. Has doing this changed what you think about yourself and your happiness, and what that means to you?
Basically everything that I expect didn’t happen and the stuff that I didn’t expect happened. Some things that are very banal, like exercise, turned out to work. I found out that 15 minutes of exercise makes a bigger difference in my life than an hour of meditation, and the research basically backs that up.

Did it change how you chose clients and jobs?
Without knowing it, I think I was very smart about those things before creating the show. During this time we pushed uncomfortableness more than before and tried to explore different dimensions that I might not have had the guts to go for in the past. We tried out things we had no clue how to do. Studies underlined this idea of risk-taking, but I did it in a more formal, systematic matter.

Can you give me some examples of these projects?
We (Sagmeister & Walsh) have been making books for Columbia for the architecture school. The books that came out two years ago had these giant holes through the middle that we presented without having any idea if it was technically feasible, if the budget we had to work under would allow it, or how we would actually do a layout that would work within that system. And of course, we were lucky enough to have a client we could talk to and tell them that we didn’t know how to do it, and they were excited about it. It was clearly the best piece we’d done for them.

Even pieces that are now in the show, like the slow-motion video, came out of that sort of thinking. I mean, this is also something we’d never tried because it’s purely digital. I’ve been relying on Esteban Diacono’s expertise.

Your typography is incredibly influential. Is there work that others are doing, or changes in direction that you see that excite you?
For us, it’s been type in motion that’s felt more interesting. I still find that the integration of image and text into a total unit, not an illustration and text, is juicy. We’ve found a way to be able to do that on a somewhat high production level, where I think I’m very happy and lucky that we can. Normally, that is almost impossible to conduct outside of an advertising space. The production and cameras are expensive, so it’s difficult to do this without any serious backing.

The exhibit takes a frank view of relationships and sex. That honest approach to human sexuality seems to be a continued focus of your work.
Clearly in design, it’s less so that sex sells, it’s all about honesty. An old, gay English man came to speak to my students at the School of Visual Arts, and said he used to tell students that everyone is interesting. They said ‘No, that can’t be true, there are so many boring people out there,’ and then he came back and said, ‘Okay, people who are honest, they’re interesting.’ That was a real insight for me. To be honest is fairly easy to me. And of course, you work to be interesting, so why not just make it honest? From an authenticity point of view to a promotional point of view, you only pick clients when you like what they do and believe in what they do. It makes things easier and benefits the viewing public, they get an honest promotion, and it benefits the clients—we don’t have to lie about it. I can talk about it at dinner with my friends, I’m actually interested in it. A lot of this freedom was made possible by not growing the studio and keeping it small, so we don’t need to take every job that we get.

Looking at the How Happy Are You? gumball display in the exhibition, do some cities have lower numbers than others? And what’s the most interesting thing you’ve seen in that drop box where people reveal what makes them happy?
Of course you have the regular stuff, cakes and boats and riding bicycles, but there were some quite honest letters about relationship stories that were sometimes touching. I know that in Philadelphia, the overall score was seven out of 10. In Toronto, the 10 was very low, but I think the machine just gave out too many gumballs at once.