Strategy: Together All Alone 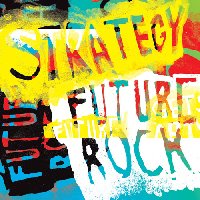 You might call the lush, liberal landscape that stretches from Portland through Seattle and British Columbia the “Pacific Northwest.” But to some it’s Cascadia–a name that is both a reference to the region and a part of a shorthand, half-joking slogan (Free Cascadia!) for a particular state of mind, if not a proposed state. Cascadia celebrates a community of freedom and open-mindedness–and it’s not just a hippie hangover from the surplus of quality local bud.

Cascadian Rhythms
For more than a decade, Paul Dickow–best known as Strategy–has been engaged in a musical free-for-all that exemplifies a true edge-dwelling mindset. A founder of the aptly titled Community Library label–an ambitiously experimental imprint that branches out into abstract electronics and rock and free jazz–Dickow is also a zealous and eclectic collaborator, even by Portland’s standards. He’s played keyboards in the un-tethered trio Fontanelle, jammed in spacey post-rock ensemble Nudge, drummed for art-punk band Emergency, alongside the fluid, roomy electronic tracks he creates as Strategy. Add in numerous remixes and singles for labels like Orac and his DJ gigs (as P. Disco), and it becomes clear that, fiercely independent streak notwithstanding, Dickow is a unifying force in Cascadia.

“Paul’s always been supportive of what other people have been doing,” says Scott MacLean, owner of Portland club Holocene. “Interestingly, that hasn’t been necessarily reciprocated by other people. I think what he’s doing is almost meta-Portland, and weirdly under-appreciated by most Portlanders.”

Time Travel
On the new Strategy record, Future Rock, Dickow does himself one better by not just integrating different styles, but meshing past and present. At a time when many of his live projects are dormant and his city is gentrifying and changing–a recent New York Times article awkwardly praised the worldliness beneath Portland’s “fleece-clad and Teva-wearing exterior”–Dickow composed the record while reflecting on the only recently deceased “golden age” of Portland’s music scene.

“It was a time when it was a little more funky and there was a lot more experimentation,” he says, referring to the city in the late ’90s and early ’00s. “There was kind of a ‘fuck you’ attitude. You could count on a lot more musical feedback. I idealize this time period.”

“When I see someone here who says they like kayaking and bands with super-long jams”m like, ‘I forgot you exist!'” says Portland musician Paul Dickow. “It’s really edgy here now.”

The dub textures and windswept, narcotic echoes on Future Rock–a refinement of the sonic palette of 2004’s disc Drumsolo’s Delight–could easily inspire nostalgic moods. But it’s the recordings of long-gone jam sessions integrated into the mix–the 30-year-old Dickow has an insane collection of old MiniDisc recordings–that really link it to the past.

“It reminds me of a certain charmed set of ideas I had about what was happening around me,” he says of listening to the old tapes. “I’m paying tribute to those by writing really honest, interesting music.”

Be it the noodling guitar melodies floating atop shimmering backgrounds on “Running on Empty” or the recovered practice-session drum loops that emerge during “Sunfall (Interlude),” Dickow says his use of old material is part of a larger, continuing effort–a attempt to make something pop out of something that’s not.

“Seeing him put all these techniques together and playing solo riffs, it’s like he let his playing ability back in,” reveals Brian Foote, a longtime friend and Nudge collaborator, and now the publicist at Kranky, the label that released Future Rock. “Part of what the album reveals is that he has all these musical threads, which you could call some kind of dilettantism. But here he fleshes everything out to its fullest.”

Bohemian Rhapsody
Dickow, who has the passion to back his strong opinions, has never been one to just dabble. He grew up in Idaho before moving to Portland, obsessed with whatever ’80s synth-pop he could catch on Top 40 radio. His father was a composer and amateur computer programmer, so Dickow was surrounded by plenty of vintage synthesizers, but he focused on the music of Pet Shop Boys and Kraftwerk. He once returned a copy of New Order’s Brotherhood to the record store because he didn’t think it had enough synthesizers or drum machines.

“I’m pretty skeptical of rock music,” he says. “It has to be very genuine and original to win me over. I think the first kind of guitar music I really accepted was My Bloody Valentine.”

In 1998, Dickow started programming and playing around Portland as Strategy. While simultaneously multitasking between bands, he eventually decided to refine his knowledge of electronic music by learning to mix and beat-match.

“You can’t all of a sudden write a Daft Punk-sounding track and say you’re house,” Dickow said. “You have to learn to mix records and learn about Chicago and all that stuff first.”

In 2003, he took lessons from DJ Brokenwindow (a.k.a. Solenoid, born David Chandler), his friend, eventual label partner, and a veteran of the Portland electronic scene. The two record junkies soon began spinning in clubs together, and the idea to collaborate on wildly eclectic sets linked by uncommon, abstract themes began to percolate. This turned into a regular night called Community Library, whose musical themes would eventually include war protests, songs about the color yellow, and even crime and punishment, (which consisted of tunes referencing different vices). Those nights inspired the formation of the label of the same name in 2005.

“That label is the best thing going in Portland now,” exclaims Michael Byrne, a music writer for the local Willamette Week newspaper. “[It’s] emblematic of the musical character of Portland, or at least fits that kind of perspective.”

“The only common thread is that there’s no thread,” muses Foote. “I think that’s a strong point of Community Library. It’s an obvious testament to [Paul’s] listening habits and the breadth of his influences.”