The Challenges of Restoring Mies, Or the Search for the Right Shade of Black 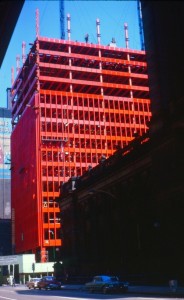 The maxim “less is more” has become synonymous with Mies van der Rohe’s design approach, shorthand for the power of focusing on the pertinent details and the experience within a space. But for those tasked with repairing and restoring the architectural icon’s masterpieces, the phrase could easily refer to the amount of work they need to perform to bring modernist buildings back to their former glory. A cynic may question the true challenge of restoring a steel-and-glass box; it’s a relatively new structure, so it’s not like restoration experts are being asked to repair 19th century masonry or recreate fixtures and flourishes from past centuries.

But when “God is in the details,” re-creating and repairing requires attention to minute measurements and solving extreme sourcing challenges. After talking with restoration experts who worked on restorations of two Mies buildings, S. R. Crown Hall on the IIT campus and the Kluczynski Federal Building in Chicago’s Loop, it’s clear that protecting his work offers its own unique issues, some that may result in economic challenges to maintain perfectly faithful facades.

“A glass and steel building may not look it, but if you go on a scaffold drop and take a close look, you’ll see that it’s really weathered,” says architect Paul Steinbrecher of Interactive Design Architects, who worked on the $99 million Kluczynski Federal Building and Loop Station Post Office restoration that was finished in 2012. “I have a lot of experience working with 19th century masonry, and while at first glance modernist buildings don’t appear to have the same complexity, they do.”

Steinbrecher worked on the Kluczynski Federal Building as an architectural historian of sorts, helping a 2004-2006 effort by the federal government’s General Services Administration (GSA) to renovate the facade of Mies’ work in Chicago’s Federal Plaza and apply for landmark status (a wider restoration effort also restored other aspects of the complex, such as the plaza). Considering that, like many Modernist structures, these buildings are energy hogs, Steinbrecher was impressed they decided to be exacting in the restoration and renovation.

“One of the visionary decisions the GSA made was that it’s going to be a correct Mies building,” says Steinbrecher. “It’s incredible they will treat it as an exemplar of Mies work.”

The 42-story tower of steel I-beams, the largest of a cluster of structures clad in black paint and arranged around a central plaza, was finished in 1974. Due to a delay caused by the Vietnam War, it was finished years after its smaller sibling, the 30-story Dirksen Courthouse, which uses the same material but was completed in 1964. While the Dirksen Building was state-of-the-art at its time and required a craftsman’s touch—the building was hand welded and the black exterior paint was applied “by two guys with gallon paint buckets,” according to Steinbrecher, Kluczynski used more modular techniques, and deteriorated faster.

That deterioration was evident in the color of the exterior facade, which had faded over decades of Chicago’s punishing weather. Mies preferred a particularly striking type of paint, Detroit Graphite Black, a lead-heavy variety that expands and contracts, all the better to cling to steel doing the same as the temperature fluctuates. (Supposedly, Mies told his architects that his favorite color was actually the Detroit Graphite Black one year after application, when it had a slight patina; maintaining that, obviously, was impossible.)

Finding a less lead-heavy replacement was a challenge. Using the paint inside a window sill that had never been exposed to the elements as a color match, Steinbrecher and his team tested five contenders, applying coats of paint to exposed steel beams set up on the roof and seeing which was the best fit.

“It’s sort of one of those theoretical architecture things,” says Steinbrecher. “Nobody else saw that and nobody else will see that. The decision was made to make the best black that we could.”

“I would say that when you have a building made of steel that’s only protection from the element is a coat of paint, you’re going to have a problem,” says Gunny Harboe of McClier, who worked on the Crown Hall Restoration with Krueck & Sexton Architects. “Look at the bridges in Chicago, it’s the same thing. With an exposed steel system, the only thing you have is the paint to protect it.”

Harboe worked on the $3.6 million restoration of the jewel of IIT’s Mies-master planned campus in 2005, and faced similar problems. Paint on the then 49-year-old structure was clearly deteriorating. They eventually sandblasted the building down to bare metal and repainted with the class black, scaffolding the entire structure during the process. But his big problem on this particular job was glass.

An earlier restoration in the ’70s replaced the lower panes of the 18-foot-tall building with new laminated windows that weren’t as translucent. To achieve the correct clarity, they had to source special low-iron glass that was more see-through. The upper panes offered another challenge—how to bring them up to code, which required slightly thicker panes. The solution, creating custom stops that created an ever-so-slight 1/8 of an inch slope, worked, but as a lone diagonal in a world of right angles, it provoked controversy from some Mies associates.

“It’s a honor a privilege to be able to work on these things,” Harboe says. “The key thing is to figure out how to restore it and get it to perform better. The aesthetic is key for Mies, and technical detailing was important to him. It needs to remain crisp.”

According to Steinbrecher, the Federal Building restoration was an outlier, not necessarily because the government took an interest in proper restoration, but because they were willing to shell out the extra cost. Since many larger Mid-Century structures are energy inefficient, it’s not clear that the owners of some of Mies’ bigger residential and commercial towers will be willing to invest in a renewed exterior that maintains the old energy bill. Steinbrecher believes more creative solutions to maintaining the sleek glass-and-steel exteriors while lowering costs are needed in the long run.

He also wonders how much the attention to detail pays off.

“Admittedly, this is an architect speaking” he says. “We would understand an extra half-inch can be critical. I know what the impact of what Gunny did at Crown Hall and what the full renovation at the Federal building was, but I’m not sure the average person would look at a triple-glazed window on the facade and freak out.”

But when you see the gleaming black facade stretch forth stories into the Chicago skyline, or marvel at how the campus landscape and architecture, visible from Crown Hall, looks illuminated through a thin skin of glass, it’s hard to argue that that Mies wasn’t working on some sort of higher plane.

“I think about the fact that Mies had 3,500 books in his collection, and when he came to the United States, he only brought over 150, all philosophy books,” says Steinbrecher. “He’s a philosopher first.”