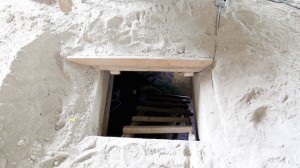 Even by the standards of Mexico’s drug cartels, the weekend prison break of Joaquin “El Chapo” Guzman was a ballsy move. The Sinaloa cartel boss escaped from the maximum security Altiplano prison via a 20-by-20 inch passage dug out of his shower—the only part of his cell not monitored by cameras—then absconded via motorcycle through a nearly one-mile tunnel, which ended up at an under-construction home in Santa Juanita in Almoloya de Juárez, west of Mexico City (some have theorized that the cartel may have purchased the home years ago, an insurance policy of sorts against the potential need for a jailbreak). Andy DuFresne wishes he had it so well. While the escape was shocking, the method didn’t come as a surprise to anybody familiar with El Chapo’s organization (or the notorious crime boss, who had previously broken out of prison in a laundry cart). A pioneer in the use of tunnels as a means of escape as well as a way around (or underneath) border security, Guzman has commissioned scores of elaborate passageways, some even boasting rail systems, to haul millions of dollars in narcotics into the United States. With these illicit feats of engineering becoming commonplace tools for his organization, the question is, who’s helping design and dig?

Considered one of the world’s largest criminal enterprises, the Sinaola Cartel has shown itself to be an innovator when it comes to sending drugs into the United States. With a repertoire of smuggling methods—including submarines—digging a tunnel to ferry goods may seem risky and retro, a time-consuming and inefficient way to move goods. But when you have anearly unlimited budget, extensive manpower, and money to bribe officials, tunnels begin to make a lot more sense.

A variety of different tunnels run beneath the border, from simple and small “gopher holes” (stretches of PVC piping used to smuggle immigrants) to larger passageways built with laborers using pick axes, shovels, jackhammers and compasses (GPS doesn’t work underground). Beginning after 9-11, when security crackdowns made it more difficult to skirt border checkpoints, smugglers began experimenting with rudimentary tunnels dug with hand tools, gradually becoming more sophisticated. Some of the cartel’s more elaborate construction projects, including a six football-field long “super tunnel” discovered between San Diego and Tijuana, included ventilation systems, railway lines and phones. A recently foiled attempt to build a tunnel near San Diego, which originated near a Mexican Air Force installation, had even been contracting trucks to dispose of soil and debris.

These larger systems may, like the tip of an iceberg, just be the known extent of a much larger operation. Since 2006, federal authorities, especially those involved in the tunnel task force that includes ICE (Immigration and Customs Enforcement), DEA (Drug Enforcement Agency) and Border Patrol agents, as well as local law enforcement, have detected at least 80 cross-border tunnels, mostly in California and Arizona. Once they receive a tip and discover one of these passages, agents will explore, often with the aid of a mobile robot, then fill in the entrances with concrete.

The design of many of the more elaborate tunnels, which some estimate cost upwards of $2 or $3 million, suggests professional involvement, especially since linking up to safe houses on the opposite side of the border isn’t a simple task. According to the Wall Street Journal, Authorities have suggestedthat these cartel infrastructure projects have been designed and built by a small clique of by architects and engineers from Durango, a mining area in Northern Mexico, valued employees being closely guarded by cartel bosses.

So far, only one of these architects has been arrested. Felipe de Jesus Corona-Verbera. He started working for the cartel more than twenty years ago, when El Chapo hired him to build a fake grocery store that served as a private zoo containing tigers, crocodiles and bears. Corona-Verbera than expanded underground, and helped design and construct a 200-foot tunnel between Agua Prieta, Mexico, and Douglas, Arizona called “Cocaine Alley,” which his boss reportedly said was “f—— cool.” His masterwork even utilized a secret entrance; turning a water faucet opened up a hidden, hydraulically activated trapdoor underneath a pool table. With the investigation of El Chapo’s escape route still ongoing, it’s too early to make any direct connections with the smuggling tunnels. But it may not be too much of a leap to imagine some of the same people may be behind this particular tunnel.