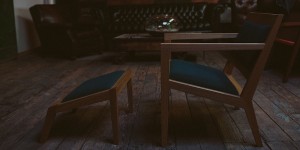 You could call furniture maker Benjamin Klebba a craftsman. The 36-year-old looks the part—beard, Portland address, can probably plane a board in the time it takes you to finish this sentence, and will debate the pros and cons of walnut versus ash with the fervor music fans reserve for end-of-year album lists.

But it’s more than a craft. Take his Peninsula Chair, an example of his crisp, minimalist aesthetic which debuted at last year’s International Contemporary Furniture Fair (ICFF) in New York. A tight web of angles and joints supports two strips of tanned leather, inviting someone to settle down amidst earth tones and grain. It’s a parabola breaking a thin plane between two armrests—geometry that sings. And ideally, it’s more than a design object.

“People have a chair that they sit in, read in, are comfortable in, and feel a sense of attachment to. When someone tells me ‘we read a book in your chair every night,’ that’s really awesome.”

Klebba literally grew up surrounded by woodworking in Harbor Beach, Michigan, about two hours north of Detroit. His father, Ron, who taught construction at a trade school, built his family’s home. His dad’s small workshop in the backyard provided Klebba with his first experiences crafting something by hand–sanding and gluing, building Adirondack chairs to make extra money as a teenager, and helping his dad build sailboats.

“I didn’t go to art school, but I always loved working with my hands, and dad was always a part of it, in a shadowy way,” he says.

He still is. Visit Klebba’s studio at Beam & Anchor, a store and cooperative workspace in Portland’s Mississippi neighborhood, and you’ll find his dad working part-time, helping him craft furniture and go over designs. A few years ago, his parents moved to Hood River outside of the city, and now live there for nine months out of the year.

“One of the most important things you can do when you’re a creative person is be open to the things that come to you,” he says. “I’m lucky enough to have a father I can work with, share a similar career path with, vibe with and high five with … it’s a cool exchange. I’m really lucky I get to do this for a living, holy crap. A friend told me, ‘you realize you’re living every dude’s dream to build a canoe with your dad.’ Building is like this return to nature, a somewhat masculine thing—not dissing on any female craftsman—building a boat with your dad is a pretty cool thing.”

In many ways, Klebba came full circle from his days in the workshop with his father, but it took time, effort and struggle. After Klebba graduated with a degree in communications from Grand Valley State University in Grand Rapids in 2001, he moved to Chicago, with a goal to record bands, and ended up working at Dusty Groove, buying up collections for the famous funk and soul record shop. Klebba remembers his time in Chicago fondly—he has a framed print of the city’s subway map in his studio—but at a certain point in his 20s, felt the pull to make something again. After a short stint working with a guitar maker proved the wrong fit—”there’s not much design involved, it’s very precise, more of a craftsman than a designer”—he met Seth Deysach, who runs his own furniture studio, Lagomorph Design. Deysach, who specializes in custom designs, showed Klebba what was possible.

“I’m a pretty open person, and Seth is an open book,” Klebba says. “I appreciated learning from him. The important part of working for Seth was learning the business end of things. If you have a thing and you’re good at it, that’s one thing in the massive reservoir of what you have to do to make a living at it. Hustle is everything. You need to show up every day and work through the bad days and keep at it, you really need to keep at it. Both Seth and my dad and the other people in my life have had incredible work ethics. “

After two years working with Deysach, Klebba decided to strike out and move to Portland in 2008—he’d visited on camping trips for years, and appreciated the city’s more relaxed pace of life, and the great community of scrappy, creative small business owners doing their own thing. But the transition wasn’t without its setbacks. In 2009, he was laid off from a job with a cabinetry firm and got divorced in the same week.

“It was a trial by fire,” Klebba says. “I have this space and these tools and need to start my business. The first year was hell on earth, and I drank tons of PBR, and just suffered and was kind of sad and didn’t make a lot of money. And it started working, and it works really well now, and that’s really good.”

Klebba says “guerilla-style” tactics helped him slowly but surely build his practice, as strategy slowly came into place. Some friends needed bookshelves for their offices. He entered a furniture competition and earned an honorable mention. He continued to schedule out more work, then it came time to do a website. Then he got the opportunity to move into Beam & Anchor, a co-working space run by married partners Jocelyn Rahm, a painter, and furniture reclaimer Robert Rahm, who also both run the retail space on the building’s first floor. He says it has been a great experience working with like-minded makers, all with different aesthetic sensibilities and a good eye for design—the Peninsula chair is a collaboration between Klebba and Matt Pierce of Wood & Faulk, a studiomate.

“I like staying active and staying busy, trying new things out, but in the world of furniture there is so much you can do, so there’s not one moment of you’ve arrived,” he says. “I’m obsessed with working on a dining room chair. Dining room set, bar stools, all sorts of stuff … I don’t have any of that stuff on the site. [The dining room] is a big room. It’s a big part about how people live.”

Now, Phloem Studios splits its time between two lines, the set collections on the company’s website, beautifully stark pieces with a mid-century appreciation of simplicity and a modern sense of shape and geometry, and custom jobs for clients across the country (and occasionally) overseas. While he does have set models, every one of these high-end pieces is made to order. A lounge chair can be anywhere between $1,800 and $4,000, and case goods start around $3,500. Everything is created from responsibly harvested, domestic hardwood–ash, cherry, walnut, white oak and maple.

“I’m sick of seeing awful, borderline country chic, reclaimed barnwood bed headboards that are gonna look like bad ’80s haircuts in ten years,” says Klebba. “To truly be sustainable, you need to be designing a smart piece of furniture that’s going to last for a long time—and look good while lasting a long time.”

Klebba’s work, both set pieces and custom jobs, all carry a personal touch. For instance, for his Meredith Cases,  Klebba experimented with numerous ideas for the handles before settling on a style that closely mimicked tighteners that his father made for old music stands, since they just felt right, and in his case, brought back a sense of nostalgia. The Nadine Lounge, a set of crisp lines and seatbelt straps he designed with his sister, Jessica, is named after his mother.

“I try to make each piece minimal and timeless,” he says. “They should feel warm and familiar and wear in well. I want each piece to be able to exist in a very modern contemporary home with lots of glass and steel and in a traditional arts and crafts bungalow.”

His pared-down design sense carries through his work—Klebba points to Shaker furniture and the work of designers like George Nakashima as huge influences, but it’s strong editing (which he considers his greatest skill) that really informs his work.

“I’m really into shapes and forms,” he says. “Stark, simple profiles and images—they feel comfortable and familiar. I think my work gets compared to mid-century designs because it’s familiar imagery, it’s calm. Contemporary stuff can sometimes get too far out, it’s simple and clean but bashes you over the head. I like chopping things down so there’s nothing frivolous. I like getting it down to the simplest form. Look at our chairs—they’re all constructed and made in a similar way. If you stick with systems, it frees you up a bit.”

Phloem Studio’s rising profile includes new designs for 2014, such as a bed with a spindle headboard and a side chair, some of which—shaped, sanded and perfectly stained—will likely turn heads at this year’s ICFF. But despite their pristine appearance on the showroom floor, Klebba’s pieces will only reveal themselves with a little age, wear and tear. Someone will make one of them the chair they sit in every night; a toddler will clutch the armrest of another model until, finally, they take a timid first step; a boyfriend will take a picture of his girlfriend decorating a dresser one night, smiling at him, excited to have just decorated their first apartment. They’re set pieces in more important stories. As Klebba says, his work is humbling for a reason.

“If you’re doing a good job, you’re building things that will last beyond a lifetime. It’s beyond humbling. It’s beyond your lifespan.”