Are solar roadways on the road to reality? 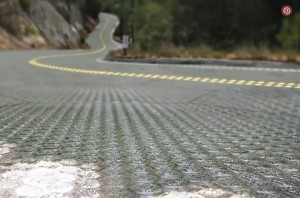 It’s been called the Mother Road and the Main Street of America, but soon, Route 66 will become the testing ground for an experiment that developers hope may change our roadways. After some delays, Solar Roadways’ hexagonal glass panels will be laid over a sidewalk near a rest stop in Conway, Missouri, once a waystation for motorists on the famous highway that helped bring Americans west.

This small test, according to staff at the Missouri Department of Transportation, will start by early December and be the first public trial of the Solar Roadways technology by a U.S. Department of Transportation. A pilot public installation in Sandpoint, Idaho, just opened in October (and has its own webcam), and in Baltimore, which is scheduled to be conducted by the Abell Foundation in October. Two European agencies are also testing this type of futuristic technology, which begs the question: Are solar roads closer to reality than we think?

Solar Roadways, (better known as Solar “Freakin” Rodaways via their wildly popular fundraising video), the glass-covered solar panels that could turn roads into power plants, was developed by a husband-and-wife team Scott and Julie Brusaw in Idaho. They received a two-year, $750,000 Small Business Innovative Research contract by the U.S. DOT to conduct tests in 2011, and a few years later, they captured the public’s attention with an Indiegogo campaign that helped them raise more than $2.2 million through crowdfunding.

The concept seemed too good to be true. Beyond turning highways into green energy generators, the panels would also heat themselves, eliminating the need for salt and snow plows, and contain lights that could replace street signs of deliver warnings to motorists. Most importantly, the solar roads would pay for themselves.

The idea was met with a heavy dose of cynicism: They’re expensive, wildly inefficient compared to regular solar panels, and potentially unsafe. Why create an entirely new system of solar panels when rooftops around the world sit empty?

But Solar Roadways also saw widespread support, and now it’s about to get a real-world test in Missouri, as part of the state’s Road2Tomorrow initiative, which is piloting new technology for the highway of the future.

A rest station sidewalk is pretty far from the founder’s vision of smart, glass-covered highways snaking across the country, soaking up the sun and powering our green energy future. But it’s also a necessary part of the slow process of gaining the government approvals necessary to be placed on actual highways.

Along with a number of other current tests and pilot being conducted by European engineering firms and local governments, it suggests that while solar roadways still have a very long way to go, there’s been plenty of progress on the road to adoption. According to Laurel McKean, an engineer with the Missouri Department of Transportation running the test, these small incremental tests are the right way for these kind of eccentric ideas find mainstream acceptance.

“Testing something regardless of the naysayers—isn’t that how we’ve grown as a culture and society?” she says. “To give someone who has an extraordinary idea the ability to test it out—I thought I’d never get the chance to do something like this. It’s amazing to be part of the scientific process.”

On the face of it, the path to dreaming up the idea of a solar road seems somewhat straightforward. Most roads sit in the sun all day, absorbing heat, one of the many environmental factors that eventually leads it to break down and need to be replaced. What if you could just simply “pave” that street with solar panels and high-tech, impact-resistant glass? Of course, the engineering realities of making that idea a reality are immense, as many teams attempting to make this vision a reality have realized over the last decade.

In addition to the Solar Roadways tests taking place this fall, two European efforts to develop solar road technology are also engaged in pilot projects. In the Netherlands, SolaRoad, a consortium of government agencies and engineering firms, has successfully tested their own panels on a bike path in the town of Krommenie.

In France, road-building conglomerate Colas and INES (the French national solar institute) teamed up to develop Wattway, a centimeter-thick surface intended to be laid over existing roadways and generate power. They’re in the middle of conducting a series of 100 small tests in sites around the globe to ascertain how the product stands up to different climates and road conditions.

“It’s sort of like the testing phase when the first airplane came out,” says Nicolas Griglio, a development engineer at Wattway. “There’s always a testing phase. I’d say we’re following that same pattern in terms of development.”

Proponents of the technology believe that the benefits aren’t just about energy generation. It’s about space. Sten de Wit, a spokesman for SolaRoad, says that for governments to truly meet their sustainable energy mandates, they’ll suddenly need a lot of room for solar panels or wind turbines.

Even in a country synonymous with windmills, it’s not easy to locate a place to build a massive piece of infrastructure that won’t make someone unhappy. Power generation, even via sustainable technology, requires lots of room. That is, unless one builds atop roads.

De Wit says the Netherlands alone have twice as much road surface as rooftops. “If we can integrate solar into roads, we can generate a lot more power without disturbing the environment,” he says. “That captured the government’s imagination.”

That all depends on getting the technology to work at a price that’s affordable, and so far, that hasn’t happened. Skeptics say that even if the technology works as advertised, the economics just don’t add up,especially versus ground and rooftop solar installations.

James W. Mack, PE Director, Market Development for CEMEX, the world’s fourth largest supplier of concrete, told the Christian Science Monitor that there will be significant sustainability and durability issues. “We can barely afford the upkeep on the asphalt and concrete we already have,” he says.

However, as Tom Blair, who’s leading the Missouri Road2Tomorrow effort, suggests, this technology could be the first instance of a roadway that could actually generate income beyond charging a toll.

“It’s time to modernize the highway system and create the first roadway system with a return on investment,” he told the News Tribune.

The upcoming Missouri test will be looking closely at power generation, to see if the 50 or so panels can power the rest stop, as well as environmental degradation, and whether the panels stand up to repeated wear and tear, as well as freezing temperatures in the winter.

McKean is quick to point out this test is a solar sidewalk. Cars won’t be running over the surface. But if the pilot proves itself, and it’s found to meet federal highway requirements, they can expand into the parking lot, and then try exit and entrance ramps.

In Europe, both Wattway and SolaRoad have both made strides with their own pilots. The French government announced earlier this year that it would like to add 1,000 kilometers (621 miles) of Wattway panels to roadways around the country (with the caveat that they would need to perform well during current testing). SolaRoad already rolled out the bike path test in Krommenie, covering 70 meters of a public path with prefabricated PV panels.

According to de Wit, when they started the test in 2014, they faced the same skepticism as other efforts. Locals thought they would be slippery in the rain, or would wear down and crack, releasing dangerous shards onto the bike path. To test acceptance of the new roadway, the road maintenance crew only covered half the pathway with the panels, and set up a camera to monitor behavior and track if people avoided the new road. A year later, researchers found that nobody was avoiding the new material.

The test hasn’t been without hiccups. During cold weather, the top layer of the roadway delaminated. When the SolaRoad consortium extends the test test this October, an additional 20-meter section of the bike path will be covered in new panels that they hope corrects the issue. Other pilots will be announced later this fall.

All three efforts are moving slowly, seeking a combination of regulatory approval and test results that suggests these new roads coverings can handle increased weight and stress. De Wit believes that adoption will start slowly, with side roads and country lanes that see less traffic and absorb more sunlight. But it will come.

Governments are beginning to come around to the lifetime cost of infrastructure, he says, and will continue to come around once they see the revenues coming from energy-generating roads. Factoring in the energy output over the 20-year lifespan of these panels, he sees these new surfaces becoming competitive or even cheaper than standard roads.

Griglio admits the costs today are still huge. He wouldn’t give exact figures, but says, “We’re aware the prices are high today.” He hopes that widespread industrialization of the manufacturing process will quickly drop the price, analogous to the way the price-per-watt of solar power generation has dropped over the last few decades. The new type of road is coming, he believes, it’s just a little further down the line.

“Today, we just hope that Wattway, and the concept of solar roads, can start becoming the building blocks of tomorrow’s world,” he says.