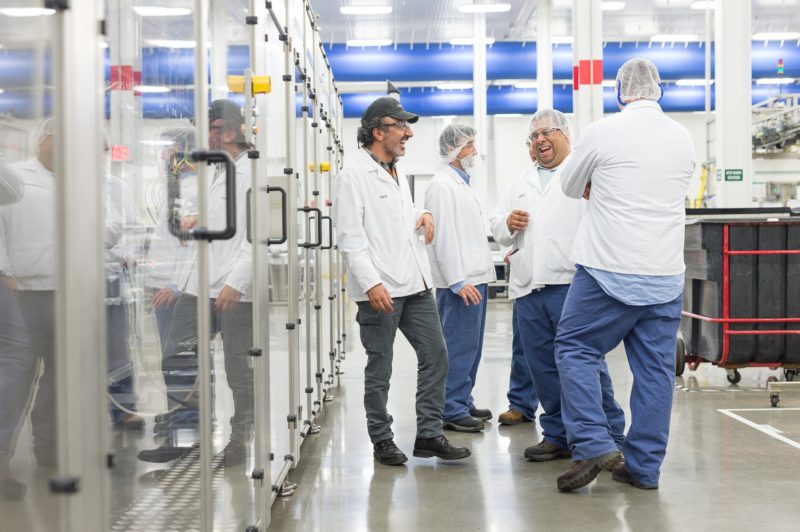 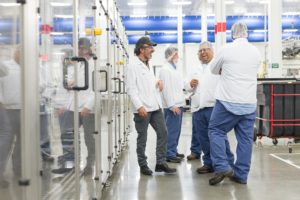 For Hamdi Ulukaya, founder and CEO of the Greek yogurt-making giant Chobani, Twin Falls, Idaho, helped his company expand in ways he could barely imagine when he arrived in the United States in 1994 as a Turkish college student who didn’t speak English. The small city of 48,000 in the Magic Valley, an agricultural center in the southern part of the state, home to the company’s 1 million-square-foot factory, will soon be the centerpiece of a new chapter for Chobani, one of the last decade’s most successful new food brands.

Earlier this month, Chobani announced plans to expand its sizable footprint in Twin Falls. A $21 million, 70,000-square-foot expansion, centered around an energy-efficient, glass-enclosed food research and development center (R&D), set to open next summer, aims to become a food-focused startup hub that will help Chobani and other entrepreneurs develop new products. Ulukaya envisions Twin Falls becoming the “Silicon Valley of food,” and Michael Gonda, the senior vice president of corporate affairs, says the expansion will double the research & development team, currently operating out of a double-wide trailer.

Chobani shows how economic development, innovation, and a new business can help change a city’s fortunes. Twin Falls Mayor Shawn Barigar said the company exemplifies “redefining rural,” a local bid to build and innovate within its proud agricultural heritage. Since arriving in 2012, Chobani has helped the agribusiness hub thrive, creating 1,000 direct jobs, pumping more than $700 million annually into the region’s GDP, and becoming a big part of the state’s important dairy industry (its plant processes 3 million of the 40 million pounds of milk produced daily in Idaho).

Ulukaya’s story, and his company’s success, embody the American dream immigrants have chased for centuries. But in today’s political climate, Chobani has also found itself drawn into the city’s and the country’s reckonings with a wave of anti-immigrant, anti-refugee sentiment. Ulukaya has proudly supported and sought out refugees, employing hundreds in Twin Falls, where 11 or 12 different languages are spoken on the factory floor.

Over the last few years in Twin Falls, as protests against refugees and an assault against a 5-year-old girl, known as the Fawnbrook case, became a catalyst for fake news, Ulukaya received threats, was subject tointernet rumors, and was called out in Breitbart articles. While anti-refugee sentiment comes from a small but vocal minority, these incidents show that the city and the company are going through growing pains as they try to understand the impact of refugee resettlement.

“Chobani plays the role of a mirror,” says Liyah Babayan, who arrived in Twin Falls in 1993 as a 10-year-old Armenian refugee from Azerbaijan and now owns a local clothing boutique. “Because of what Hamdi stands for, Twin Falls leaders and community had to reflect on their values, narratives, and heritage. I don’t think he created a yogurt company with the purpose of sparking a refugee conversation. But that is naturally the benefit of corporate social responsibility and Mr. Ulukaya’s social entrepreneur pulse.”

Becoming a pillar of the local economy

“One thing I think is important to remember is that we’ve had refugee resettlement since the ’80s,” says Barigar. “For 30-plus years, we’ve been a welcoming community, inspired by the humanitarian need sparked by refugees fleeing danger.”

Twin Falls has been part of the nation’s refugee program for decades, with a resettlement office at the local College of Southern Idaho (CSI) helping to place roughly 300 refugees every year.

When Chobani first considered expanding to Twin Falls back in 2011, none of this was central to the conversation or the courting of the fast-growing company. Barigar, then president and CEO of the chamber of commerce (a role he still performs in addition to being mayor), said the city and local economic development agencies spoke about the state’s economy and labor force. They “came for the milk,” he says, and quickly got to work. The Twin Falls factory, the world’s largest yogurt production facility at more than a million square feet, broke ground and was up and running in less than a year.

Chobani initially expected to create 300 jobs. The plant now employs 1,000 directly, according to Barigar, and economic analysis shows that for every job at the plant, six or seven are created in ancillary industries such as dairy and trucking. Idaho’s unemployment rate has fallen from 6.3 percent to 2.4 percent since Chobani set up shop.

“They’ve had a positive impact,” says Rick Naerebout, CEO of the Idaho Dairymen’s Association. “They’re a big processor, but a little different because they’re a brand. There wasn’t this awareness of the Magic Valley, all the brand recognition, and the great opportunities.”

In addition to the overall employment boost, Chobani has been a boon for refugees. Ray Parrish, a local banker, serves as the publicity director of the area’s Mormon church, which serves roughly 40 percent of the city and has traditionally been very active in assisting refugees. He says Chobani has made a huge impact, providing jobs as well as helping refugees connect with English as a second language classes and get settled.

“They’re a phenomenal organization and opened their doors to everyone in the community,” he says.

Over the last few years, a series of incidents and protest by Twin Falls locals who question the refugee program, echoing much of the anti-immigrant rhetoric in the current political climate, have put the city in the national spotlight.

Locals pushed for City Council resolutions to curtail refugee resettlement until it’s reformed. The assault of a 5-year-old girl in the Fawnbrook case was initially blamed on Syrian refugees—though none have yet come to Twin Falls, according to the Idaho Refugee Center. There has also been a rolling series of sensational reports (a trio of refugee boys were eventually convicted of the crime). A group called Idaho 3 Percent, part of a nationwide network of “patriot movements,” has staged protests against refugee resettlement. (When contacted for an interview via Facebook, Idaho 3 Percent told Curbed, “We are not anti-refugee, we are pro-safety and systems that work to ensure the safety of our citizens first. At this time, no interviews are being done.”).

While the complaints and protests focus on safety concerns and the cost of the resettlement program, the critique has been widened to include local labor abuses. A Breitbart reporter claimed local businesses received kickbacks for hiring refugees, using them as a cheap labor force to replace U.S. workers (the Idaho Office for Refugees says that is false).

“Hamdi has made it very clear, if you want to be past of a values-based, mission-driven company, he wants to give you that chance at Chobani,” says Gonda. “If you’re able to work, Chobani is a home for you. That’s not limited to any ethnicity or background, but to the entire community. That’s been our way of working long before we came to Twin Falls.”

Persistent rumors, including a false story that Chobani was involved in a conspiracy involving child sex and spreading tuberculosis, led the company to file a successful defamation lawsuit against Infowars’ Alex Jones, who took down the fake stories as a condition of the settlement. As a private company, Chobani has no role at all in the refugee program, says Gonda.

“There is more chatter about refugees in Twin Falls now because the color of their skin has changed,” says Babayan, who believes this type of anti-Muslim sentiment only surfaced in Twin Falls in the last few years. “People said Muslim refugees weren’t compatible—and this was before Trump—talking about Sharia law and the influx of Syrians before one even arrived. That’s strange to hear, since we’ve had Muslims here since refugees from Kosovo and Bosnia began arriving in the ’90s. Ten percent of our police force is Bosnian refugees. Has the religion changed?”

According to Tara Wolfson, incoming director of the Idaho Office for Refugees, the largest refugee communities in Twin Falls are Congolese, Bhutanese, and Iraqi. Currently, no Syrian refugee have arrived or are set to arrive in Twin Falls, and the number of refugee places in the region should total 245 for 2017, slightly below average for the last few years. Twin Falls, a city that offers a “soft landing,” is ideal for refugees, she says. It’s large enough to have social services, but not too big to get lost. Housing is still affordable, and the job market is strong (90 percent of the new arrivals have found jobs).

“We’re really excited about having Chobani in our state, but as far as the program goes, refugees don’t get preferential treatment or placement,” she says. “Chobani uses staffing agencies for initial placement of employees.”

The backlash against refugee sentiment in the community has created a movement of its own. Wolfson says local support organizations have received higher-than-average donations, and many normally quiet pro-settlement members of the community have become more outspoken. Barigar and other city leaders pushed and adopted a Neighborly Community Resolution focused on providing a welcoming environment to refugees, embracing diversity, and getting different voices involved in local politics.

In response to a recent incident at the Twin Falls Islamic Center—a cross wrapped in bacon was placed in its front yard—a large multifaith gathering, featuring an array of local religious and political leaders who formed an interfaith council, assembled in the city’s main park.

“I think this is all a very small minority, a few people who don’t understand cultural diversity, don’t understand what these people have gone through to get here, and fear the sensationalism and stories about Muslims in the media,” says Parrish. “They get ethnocentric. The majority of people raised in this valley are white, Judeo-Christian individuals, and sometimes you get a small minority who want nothing but that. They fear what they don’t know. One or two people put up a bacon cross, and they get headlines. Several hundred show up for unification and acceptance, and it gets nowhere near the level of attention.”

Barigar is the first to admit that as national media attention focused in on the Fawnbrook case and the city’s refugees last year, city leaders were a little unprepared, “muddling our way through” for the first few months. But he feels these incidents have sparked a community conversation about core values.

“We have a century-plus history of being welcoming and allowing newcomers to come here and seek their fame and fortune and pursue the American dream,” he says. “It was difficult to remember that at the beginning of the conversation, but as we made it through, we did a better job of communicating our values or embrace of newcomers.”

Chobani seems to have chosen a deliberately low-key response to these incidents and issues. Many locals believe Ulukaya, rather than raising tensions, prefers to lead by example. Having a powerful economic stakeholder in town implicitly showing the value of immigration and refugees makes a pretty strong point. Deborah Silver, an accountant, political candidate, and chair of the local Democratic Party, says Chobani did a great job of being a good neighbor and not forcing its narrative on the community.

“He hasn’t necessarily been involved in sending a statement out,” adds Babayan. “He’s not here to micromanage our community, or defend local refugees. I think he’s trying to do that on a more global scale.”

As Chobani embarks on an expansion, and additional investment, in Twin Falls, its unique place in the community has helped fuel some of these re-evaluations, says Barigar.

“Hamdi’s personal mission, part of the company’s worldwide mission, to address the refugee crisis has been a good fit for the community,” he says. “It’s been an opportunity for us to appreciate it’s not all about the bottom line financially; it’s about doing the right thing. Their practice of that is a valuable addition to the social fabric here.”