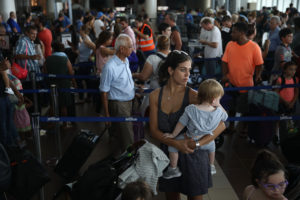 SAN JUAN, PUERTO RICO – SEPTEMBER 26: Noelia Torres and Orlando Liam Bear,1, on her way to Orlando, Fl and others wait in line to clear through security to catch a flight out of the Luis Munoz Marin International Airport as they try to return home after Hurricane Maria on September 26, 2017 in San Juan, Puerto Rico. Some of the people have waited days at the airport in hopes of getting onto a plane after Hurricane Maria, a category 4 hurricane, devastated the island. (Photo by Joe Raedle/Getty Images)

At Orlando International Airport’s Terminal A, the steady stream of flights from San Juan, Puerto Rico, has tapered, but hundreds of Puerto Ricans still arrive daily, in search of stability, safety, and economic opportunity in the wake of Hurricane Maria’s devastation in September.

It’s a “roller coaster of emotion,” says Marytza Sanz, who has spent weeks greeting, calming, and assisting her fellow citizens. Sanz is the president of Latino Leadership, a local group that’s part of the web of nonprofits and government agencies manning the welcome center, offering housing assistance, social services, and leads on employment. She has spent long days counseling families—sometimes dozens a day—some clutching photos of the houses and neighborhoods they left behind. She doesn’t see an end in sight.

More than 239,000 Puerto Ricans have arrived in the state since October 3, according to figures from Florida’s State Emergency Response Team​, mostly in Orlando and surrounding cities. It’s the largest evacuation on this scale in the history of the state.

In the storm’s aftermath, government and nonprofits have mobilized to address the immediate needs. But amid the rush to quickly respond, Sanz believes a tipping point has been reached.

“This isn’t an emergency that’s finished, like the hurricane that passed by Puerto Rico,” she says. “This is a hurricane that’s starting here, in Florida.”

Sanz, along with other experts, analysts, and people on the ground in Orlando and Orange County, doesn’t believe the government is doing enough, in terms of coordination and long-term planning, to address what many consider a growing, prolonged migration that will create a massive, long-term shift in Orlando and central Florida.

“We’re one of the fastest-growing regions,” Orange County Mayor Teresa Jacobs told the Orlando Sentinel in November. “We’ve been handling growth. We just can’t handle it in a matter of weeks.”

While the news rightly focuses on the slow pace of recovery and rebuilding on Puerto Rico, less attention has been given to the intertwined, and in many ways more immediate, challenge of Puerto Ricans settling in Central Florida. The influx of new arrivals, says Betsy Franceschini, senior state director of the Hispanic Federation, is a “migration of biblical proportions.”

The influx of new arrivals is a “migration of biblical proportions.”

According to the U.S. Census Bureau’s latest American Community Survey—outdated after post-Maria migration—around 320,000 Puerto Ricans live in central Florida. A significant number have come recently, in the midst of the island’s economic troubles. The post-Maria migration may bring an additional 114,000 to 213,000 each year for the next two years, according to the Center for Puerto Rican Studies in New York City, changing the demographic makeup and politics of the region for decades.

This sudden influx will also put pressure on housing, social services, and the job market that have yet to be fully addressed by state, local, and federal officials. Take housing: Sanz says the some of the government’s immediate solutions, such as extending vouchers and finding temporary space in area hotels, may only carry through the middle of January.

In a region that already has an affordable housing crisis—the National Low Income Housing Coalition ranked the greater Orlando region third-worst in the nation for its availability of housing for extremely low-income residents—thousands of new residents coming every week require a much larger effort to provide shelter. Local leaders wrote to Florida Gov. Rick Scott asking for a task force to tackle the issue.

Perhaps the most vexing part of the challenge is how conditions on the island dictate conditions in Florida and elsewhere: Without rebuilding the island’s infrastructure and economy, more Puerto Ricans will seek better opportunity elsewhere, increasing the long-term impact. It’s challenging math for leaders in central Florida, San Juan, and Washington, D.C.

“We’re in a precarious position,” says Democratic Congressman Darren Soto, a Puerto Rican whose district in central Florida covers areas where many new arrivals are settling. “We welcome everyone, but also understand that we need to support Puerto Rico and its long-term recovery, so both regions can prosper.”

With more than 200,000 new Puerto Ricans already here, and more set to come to central Florida, Congressman Soto has said it makes for a difficult situation. Many have been able to find work, but housing has become a challenge. Many are sharing space in existing homes, sometimes fitting two or three families in the same home, in order to help provide temporary shelter during the crisis.

They come because Orlando has become what New York City represented for the parents and grandparents of today’s Puerto Rican immigrants: a land of opportunity.

The shifts and migration to the Orlando area—especially Orange and Osceola counties—started in the ’80s, says Franceschini. When oil refineries on the island shut down, job-seekers headed to Florida. Later, the region’s theme-park boom offered jobs in the hotel and entertainment industries. NASA started recruiting engineers in Puerto Rico. The debt crises that have hit the island only accelerated the flow of people toward higher-paying jobs. Florida’s Puerto Rican population more than doubled, growing from 479,000 in 2000 to more than 1 million today, according to the Pew Research Center. Hurricane Maria put everything into overdrive.

“Florida will soon displace New York state and New York City as the epicenter of Puerto Rican life in the United States,” says Jorge Duany, the director of the Cuban Research Institute at Florida International University.

The sheer number of people moving at the same time may also test Puerto Ricans’ ability to build new lives on the mainland. Many regions in central Florida already have a housing shortage. Workforce development and access to classes in occupational English are keys to a smooth transition. And education at every level presents a challenge.

“People who would have never thought about moving suddenly feel like they have to move away,” says Franceschini. “It’s a humanitarian crisis—essential, basic human needs can’t be met on Puerto Rico—and speeding up the exodus. What’s going to happen to our people and our island? Will we be able to rebuild?”

Ramping up the response beyond immediate needs and quick fixes

A patchwork of groups and government agencies has already been on the ground assisting Puerto Ricans since Hurricane Maria struck. Orlando’s Hispanic Office for Local Assistance (HOLA) said that the cityand a large cast of agencies has provided bilingual services to evacuees, including the American Red Cross, Agency for Persons with Disabilities (APD), Florida Department of Agriculture, Florida Department of Children and Families, and FEMA, as well as Orange County and Osceola County Public Schools. The state opened the Multi-Agency Resource Centers (MARC) at Orlando and Miami international airports, the primary points of arrival and contact.

At the MARCs, evacuees begin to receive a number of resources and assistance: two months of food stamps for families through the SNAP program, as well as Section 8 and FEMA assistance for housing. Younger students are being placed in local schools, and college students have been offered in-state tuition to many local universities, which have also waived registration fees, for the spring semester. Congressman Soto says there is “a lot to be thankful for,” especially food and education assistance. But housing remains the big challenge.

“Nobody would be surprised to hear the total number of Puerto Ricans who came here due to Maria reach 400,000 or, half a million over the next few months,” says Duany. “That may even be conservative. This will be much larger than previous migrations.”

The slow pace of recovery in Puerto Rico greatly complicates the financial, economic, and political aspects of recovery and readjustment. Duany points to a recent online survey of Puerto Ricans still on the island that found 72 percent planned to leave the island in the next few years, and of those, 40 percent said they didn’t think they’d plan to return in the next five years.

Before Maria, Puerto Rico’s population had already dropped from 3.8 million to 3.4 million due to outflow caused by the economic crisis, says Duany. He says he wouldn’t be surprised if the island’s population drops to 3 million in the near future, driven in large part by the loss of the working-age population and professionals with options elsewhere. At a time when major infrastructure investments are needed just to restore an already difficult economic situation, the demographic ripple effect of increased migration will only be a catalyst for more to leave, a vicious cycle.

“Unemployment and poverty have already increased on the island, and the effects are going to be devastating,” says Duany. “For the past few weeks, many reporters have made comparisons to the Mariel Boatlift, when many Cubans suddenly came to Miami in the early ’80s. But I think there are other models. It reminds me of post-Katrina New Orleans, or even the Irish potato famine: The devastation was worse in that case, but the population never, ever recovered.”

Duany says the federal government is the only entity that can help Puerto Rico fully recover. There have been proposals for a wide-ranging, Marshall Plan-style investment in island infrastructure, focused on creating a more sustainable, responsive electricity grid. Congressman Soto has co-sponsored a bill with senators Elizabeth Warren and Bernie Sanders, among others, to spend billions boosting renewables and reform PREPA, the island’s inefficient electric utility.

“Frankly, people are concerned many will leave and never come back, which would hurt the long-term prospects of recovery ever coming to Puerto Rico, so there’s a little tension,” says Soto. “We’re working on that sensitive issue now.”

But, with Puerto Rican recovery efforts falling from the headlines amid other legislative news, it looks like central Florida will also need to develop a more coordinated, comprehensive response. The Florida Division of Emergency Management has said it is working with federal and local partners to explore options, and the governor’s office has said it’s coordinating with all available partners to make sure appropriate resources are provided, but so far, the kind of task force or group response requested by local leaders has yet to materialize.

Amid the demands on healthcare, housing, jobs, and education, the federal government needs to come through, according to Franceschini, and get everyone sitting at the table to figure out what’s available and develop a strategic plan. The response was rapid, but this isn’t a transitional situation anymore, she says, and this requires a public policy response—and a plan for growth.

“Right now, people are thinking this is short-term,” she says. “The majority of the Puerto Ricans who are arriving are going to stay. They’re looking at the state as a place to live and find opportunities, like any other U.S. citizen.”