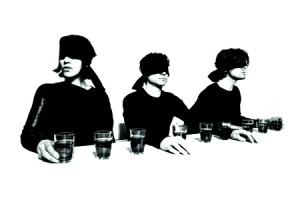 L.A. trio Autolux strikes a rich vein of guitar and bass tones, recalls the dark, prickly melodies of Blonde Redhead and Sonic Youth, and roughs everything up with drummer Carla Azar’s heavyweight hammering. It’s a balance of high and low fidelity, according to guitarist Greg Edwards, which he constantly tweaks while playing and recording.

“It’s easy to get texture and emotion from a lo-fi approach, and it’s easy to get dynamic, sterile sound with good technique that has no lasting impact,” he says. “We’re always trying to combine emotion and impact that’s not a mess, and fidelity that’s not just soulless and academic.”

Transit Transit incorporated lessons learned during previous sessions with producer T-Bone Burnett that comprised 2004’s Future Perfect. Burnett’s engineer labored over mic placement, and when Edwards set out to record the new album himself, he followed suit. Recording in a practice space with below-average acoustics, something that precluded using a room mic, forced the matter.

While recording himself, Edwards avoided excess compression and extraneous pedals. He alternated fluidly between Gibson ES-345 Hollow Body, Gibson SG, and Jazzmaster guitars, playing through a VHT cabinet with a Pitbull head into a pair of positioned mics. A Neumann U57 provided punch and articulation while a Royer R-121, a “very EQable, pleasant sounding mic,” brought out the mid-range and high frequencies, important on songs like “Supertoys,” where the bass and guitar constantly shared frequencies.

“The midrange is a mysterious area for me psychologically,” says Edwards. “I want to hear more than I should, so I undershoot with midrange. I follow the old wisdom about taking away frequencies to reveal what you want to hear and turning down the high and low ends.”

Tracking to an Alesis ADAT HD24 hard drive captured multiple versions of the same line, and provided more options for mixing. Many of the bent, distorted tones come from running two amps simultaneously to create tension. The fundamental sound from the amp, layered or not, is always the starting point.

“With guitar mics you can get a wide range of differences in tone just by changing the angle, pointing into the cone, or changing the mics’ positions in regards to one another,” he says. “I get the amp sounding exactly like I want, and then it’s up to me to put the mics into the right position, do some subtle EQing with the pres, and really capture what’s coming out.”