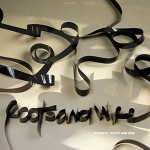 As a sample on his new album suggests, Berlin-via-Montreal producer Deadbeat is adept at stripping his sleek rhythms and solid bass lines to “the skeleton of the music.” Though his sounds are indeed massive, his music doesn’t just fill out a room; it animates the space, laying down hypnotic dub beats with Basic Channel-style rhythms, before giving everything a subtle, energizing tweak. Tribal beats gradually simmer on “Grounation,” until a wave of synths pushes them to the boiling point. “Deep Structure” plays bubbly Detroit techno sounds against a mellow, clicking rhythm, and “Night Stepping” flirts with Metro Area-like sleekness, as waves of bass eddy and flow. Suffice it to say, Deadbeat’s deft, detailed touch brings a new, streamlined lightness to dub techno.