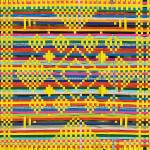 Planes of bright green figures on an Atari-like landscape of oscillating lines, vectors, and grids — these are the sorts of images that accompany performances by San Francisco’s Tussle. It’s an appropriate set of visuals for a band that creates taut, bewitching rhythms. And, with a recent series of personnel shifts — original members Nathan Burazer and drummer Jonathan Holland are now joined by fellow drummer Warren Huegel and bassist Tomo Yasuda — Tussle have added another dimension, taking their music into free-ranging, cosmic arenas. It’s fitting, then, that the band wanted to release its new album, Cream Cuts, on August 8, 2008, in honor of a certain sacrosanct Roland product. Earplug’s Patrick Sisson phoned knob twiddler Nathan Burazer to talk about music’s collective call, looking over the shoulders of giants, and how making music is like the plastic arts.

Earplug: You have an art background and often perform in galleries. What is proper gallery etiquette, and how do you score a lot of free wine?
Nathan Burazer: For us, there is no etiquette. The wine just comes, you put up your glass and they fill it up, and you do your thing and be yourself. You need to put your pinky out a bit while drinking your wine and occasionally go to the bathroom to make sure your beret looks OK.

EP: The music on Cream Cuts sounds more flexible than on previous albums. In addition to the lineup switch, how has the songwriting process changed?
NB: It was interesting. We came out of the lineup change and were like, shit, we have to write new songs. And a lot of the songs came out of samples that we had, things I had kept around from touring that we took into the studio. Over the span of two years, we added some overdubs and had a lot of back and forth. It was actually a lot like painting. Erase, paint some, sit back, look at it a couple of months later, add something, and then take it out.

EP: You started working on the album in November 2006, so you had a lot of time to revisit the tracks.
NB: We didn’t want to sound like ESG and Can all the time. We were getting kind of burned out on all that. I think Jonathan and I, the oldest members, were ready to really switch it up, and it took a little bit of time for the new guys to get on board to try. We wanted to do something more nimble, something that was more fluid. Let’s really turn this thing inside-out and look at it from all angles. More like sculpture. Before, it was more like drawing.

EP: You’ve played with some legendary and amazing musicians, including Liquid Liquid, Cluster, and Faust. That’s pretty heavy company.
NB: It’s amazing. It’s one of the joys of playing live, to be able to meet and learn from people that have inspired you and influenced you over time.

EP: What’s the best advice you’ve received from any of these groups?
NB: I wouldn’t say we necessarily got advice in the verbal way. But watching Cluster perform, even though we couldn’t see their complete setup, was interesting. They have this mastery of transitions. They just move in and out, from loud to soft, from hectic to minimal, with such muscularity. It was so elegant. Before you know it, it changes into something else.

EP: The Tussle website mentions that you learned to play guitar in North Carolina from a religious cult. Could you talk a little bit about that?
NB: That was my first experience with music making. I played hymns and gospel stuff in a group my parents were part of when I was a teenager. Some of the songs were kind of Eastern, and some were traditional American hymns. Some group members taught me the songs, and we would all play them at meetings. It was pretty weird. Now I don’t play guitar at all — I don’t really like playing guitar. My mother didn’t want to be in the group and my father did, so it was an interesting time in my life. It led to my parents’ divorce. After that, I kind of rejected a lot of guitar music, since I associated guitar with the group.

EP: Was it an offshoot of Christianity, or was it totally different?
NB: It was a mixture of Christianity, Hinduism, and Buddhism. There was a guru who led, and everyone would bow to him and do what he told them to do. The meetings would happen on the weekend of every full moon. There was occasional child swapping. I’ve started talking about it more lately, and as I’ve started talking about it, I’ve heard more people saying their parents were part of something like that. I don’t think it’s something people talk about a lot because it’s very intense, but I think it’s good for people to talk about.

EP: Do you feel like that’s really shaped your perspective on music?
NB: I’ve always thought about music as being a sacred thing, where you connect with people on a higher level. You can touch people in a profound way, and I think that’s one way it can be used for a group or a cult thing — to pull you in and make you feel some connection to these people, where you wouldn’t otherwise.