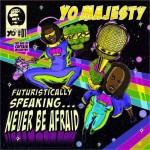 Few rappers, especially those with a song called “Kryptonite Pussy,” attempt to book a tour with their pastor as the opening act. But that’s the way Shunda K (LaShunda Flowers), half of black Christian lesbian rap duo Yo! Majesty, operates. As her partner Jwl B (Jewel Baynham) explains, their message is about being real without being sanctimonious.

“Don’t be afraid to be yourself, or life isn’t worth living,” Shunda K says. “Whether you’re gay, straight, homosexual or bisexual. People told us we weren’t going to make it. But we kept our eyes on the prize, and everything came to pass.”

The group’s eclectic debut, Futuristically Speaking… Never Be Afraid (Domino, 2008), lives up to that ideal of self-actualized rap that’s not too serious to party. They embrace their faith and get freaky, tackle obsessive relationships and drug dealing, all while broadening their sonic palette. When Yo! Majesty emerged from Tampa Bay in 2006 with a MySpace following and the Yo! EP — then a trio that included now-departed member Shon B. — the focus was on raucous, unapologetic lyrics and a stew of hip-hop, electro and Miami bass. Jwl’s penchant for taking off her shirt mid-performance also drew attention.

“People always say I have beautiful titties,” Jwl says. “But they also say our show was the bomb. We’re saying some real shit out of our mouths. Normally you don’t hear that out of anybody’s mouth.”

Futuristically Speaking… Never Be Afraid expands on the club-friendly formula. Various producers contributed, including Basement Jaxx, who recorded the sleazy, insistent “Booty Klap.” But the bulk of the album came from longtime collaborators Hard Feelings UK, the British production duo of David Alexander and Richard Winstanley. Alexander met the rappers in 2002 while working in a Tampa recording studio. Since then, he’s collaborated long-distance with Winstanley, who works out of a studio in their hometown of Milton Keynes. The pair trades files, sending basic beats stateside for Yo! Majesty to rap over, then send tracks back and forth during post-production. The new album was winnowed down from dozens of finished tracks.

“There was definitely some sounds from the past, some old-school electro, noisy post-punk and dance music that makes you want to dance, like funk and disco,” Winstanley says. “We like more outlandish artistic expressions, like smashing your guitar to smithereens.”

To capture the group’s intensity, most of the vocals were recorded on the road in hotel rooms or in the closet of a friend’s Tampa Bay apartment. The makeshift setup consisted of Alexander playing beats on his laptop and recording vocals through a Shure KSM32 microphone. At a hotel during SXSW in Austin, they taped the mic to a lampshade. The vocals were rerecorded later, but around 80 percent of the album contains these original takes.

“The old takes just had the drive,” Alexander says. “Going back six months later and putting it down in a professional studio lacked that spark.”

Many of the beats were made with a patchwork of vintage drum machines, an old Commodore Amiga computer with the OctaMED 8-bit tracker program and occasionally, Logic 8. The choice of equipment came from both necessity (some older tracks were made when the duo was starting out and had little gear) and a sense that these older, vintage sounds fit Yo! Majesty. The beats on “Club Action” were cobbled together from the Yamaha TX81Z FM synth and Korg 707 synth. The 8-bit bounce on “Blame It on the Change” was mostly from OctaMED.
“I think the beatmaking is all about throwing anything in,” Winstanley says. “If you make it all on Logic 8, all the tracks are going to sound the same.”

Though electro-tinged beats still predominate, the album has more variety. Most of the guitar lines on tracks like “Fucked Up” were samples from old jam sessions between Alexander and Winstanley, which brought in a broader, sometimes punk element. “Buy Love,” a slow ballad, included Alexander’s languid strumming on a Yamaha steel-string guitar. “Get Down on the Floor” flips things again with a funky groove, an attempt at some “Bernie Worrell-type stuff,” Winstanley says. The beats were made from two old drum machines, an Alesis HR-16 and a Boss DR-110, and the bass line was recorded on a Roland Juno-106.

Both the music and Yo! Majesty’s message has a direct quality. Alexander described the overall philosophy best: “Make something that grabs you by whatever body part it’s going to grab you by and moves you around.”