Lost albums and self-made musicians are profiled in a sprawling new book on DIY recordings. 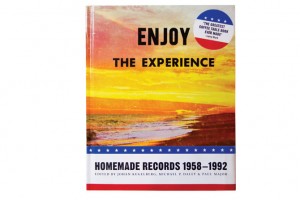 As the ritual of hunting down limited-edition vinyl for Record Store Day begins, music fans can turn to a new book about private press recordings to see what limited really means. Enjoy The Experience: Homemade Records 1958-1992, the first release from the Sinecure Books imprint, compiles, catalogs, and exposes hundreds of private press records, a celebration of self-funded, small-batch sounds from the margins of the music world.

Assembled over three years from the collections of noted vinyl afficianados like Eothen Alapatt and Gregg Turkington, the profiles of these rare releases paint a portrait of self-starters and artistic misfits, from outsider folk trios to religious cult leaders, who had the drive to commit their visions to vinyl by themselves, before the days of Soundcloud and Bandcamp.

Editor, author, and collector Johan Kugelberg, who wrote the book with Paul Major and Michael P. Daley, says the attraction is “privately made records as an American vernacular.”

“I’ve been knee-deep in this stuff for over half my life to date,” he says. “I love this music and these people, so the ultimate art experience for me is the realization that what Paul Major coined as ‘real-people music’ is infinitely more rewarding than mass-produced music product.”

The design of the sleeves for these rare, DIY projects reflects the same limited means and budget constraints as the music-making itself, and often led to the same wild creativity.

“The general trend is DIY,” he says. “Sometimes you see total amateur-hour, sometimes genius design solutions by a spouse or family member, sometimes things are pure work-for-hire, and quite often you’ll see designs with no input from the artist whatsoever, where companies such as the most celebrated Century Records will provide templates of generic designs for the artist to choose from. The more of these you look at, the more an aesthetic narrative unfolds, not unlike mid-century Scandinavian folk painting, where different regions had local painters who never met but where the style is cohesive. Or for that matter, American crazy quilts, or regional pies, or hardcore punk flyers from different parts of the world.”

“What interests me personally are extraordinary (and ordinary) people who are cause for the United States being the most interesting and complex society existent,” says Daley. “Enjoy The Experience is all about these sort of people.”

A two-CD music compilation of private press releases featured in Enjoy The Experience: Homemade Records 1958-1992 will be released by Now-Again Records. The authors are also trying to capture the narrative of many of the artists profiled in the book on their blog.

Enjoy the Experience is available April 20 at local record shops.