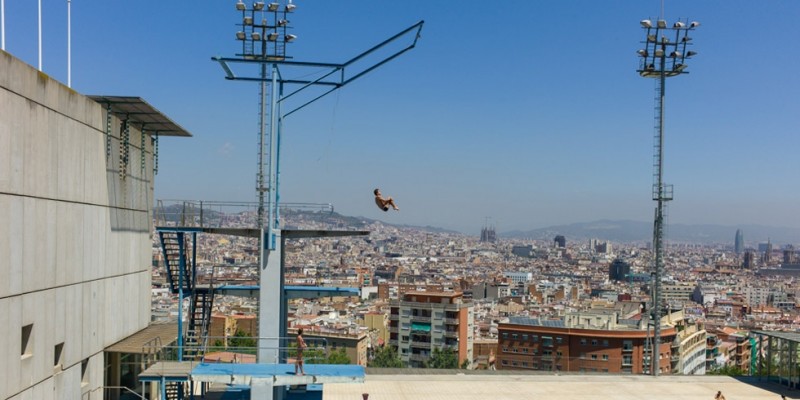 With Rio racing to prepare for 2016, Brazilian protests against stadium spending raging and the price tag for the Sochi Winter Olympics rising precipitously, the subject of infrastructure spending for the bi-annual games is a heated one. But it’s the second life of these structures which often leave a permanent mark on the urban landscape, marks that are explored in The Olympic City project.

Filmmaker Gary Hustwit (Urbanized, Objectified and Helvetica) and photographer Jon Pack examine the aftermath of the games, chronicling the legacy of leftover structures in neighborhoods and cities long after the games have ended. The first phase of this ongoing project, covering Athens, Barcelona, Beijing, Berlin, Helsinki, Mexico City, Moscow, London, Los Angeles, Montreal, Lake Placid, Rome, and Sarajevo, has been collected in The Olympic City book out this month.

What inspired your collaboration on this project?
Jon Pack: Beijing was the first Olympics when I really paid attention. I had never been a fan of the Olympics, and my wife was watching it and it was on all the time. All the coverage was about the money and the crazy amount of infrastructure that was built. After the two weeks was over, I couldn’t wrap my brain around it, and thought I could be interesting to see what was left of the Olympics in other cities. I went up to Montreal, where my brother lives, and Lake Placid, and took about a week and a half and looked around and found really interesting cities. Lake Placid was a tiny little village of 2,500 people, and it was weird that they put the Olympics there. They turned a prison into a place where they housed the staff—I found that sort of fascinating. Montreal has a huge debt. It took them 33 years to pay off the stadium and the roof, which can’t be used in the winter. When they “finished” in 1984, it wasn’t even ready for the Olympics. It was this very complicated, really interesting idea—the roof is held up by the tallest leaning tower in North America. They didn’t complete it until ’94. There were some interesting ghosts that remained in these towns. It continued slowly as a personal project, then after watching Urbanized, I went to a screening, we talked and started collaborating.

Gary Hustwit: It was around the time when I was making that film and saw his photos from Montreal and Lake Placid that I was city obsessed—it was about design of cities and how cities are shaped. There were a lot of things that kind of connected with the questions Jon was having around cities. So I just talked about it and decided to collaborate, and decided we could cover more cities if we divided them up.

Have planners been getting better at not making such a grand spectacle of these Olympic projects and being wiser about long-term impacts?
Gary Hustwit: It varies bit by bit. There were several cities we saw that needed this redevelopment. It fit within the organic growth of the city. Other cases, where there was no planning, it was kind of a public relations stunt by a city or a country, to prove they could do it. They didn’t know how they were going to use it. Athens was a good example of what not to do in terms of the venues, but they got a new subway line. There are definitely benefits and drawbacks. There really has to be more thought put into the legacy of these structures.

Jon Pack: All these cities, and you could see it with London, everyone is seeing Athens in their rearview. All of them are talking about how many stadiums are going to be built that can be broken down. In London, six or seven could be broken down, and they were designed to be temporary structures. Beijing didn’t design them to be temporary structures. But, that’s China.

Do you know if places like Sochi and Rio are doing a better job of looking at how everything will work after the games are done?
Gary Hustwit: Sochi will be the most expensive Olympics ever. It will cost over $50 billion for a Winter Olympics, that’s unheard of. Russia is trying to build this world-class resort city out of nothing. So again, they’ve got their own motives for putting money into it. Ninety percent of people you ask don’t know where Sochi is—after the Winter Olympics, they will. Will they go there on their vacation? That’s probably the bigger motive for Russia to host it and put their money into it. Probably doesn’t make sense for a place like Rio. They’ve having all sorts of controversies around the World Cup, and whether they will be finished. Rio citizens are questioning why they’re spending billions on stadiums, but not hospitals and schools. It’s an ongoing thing. Every time there’s a major Olympics and major sporting events, questions have to be asked. Beyond this two-week party, what’s the lasting consequence?

How does the IOC fit into the calculations and bids that cities make to host games and build stadiums?
Gary Hustwit: There’s definitely a list of things that the IOC mandates—everything needs to be a certain size and even if you have a big stadium, it probably won’t be to the IOC specifications. There are definitely hoops cities will jump through to get the games. If you want it, here’s a list of things you have to have. It’s normally $40 million just to bid, and you have to start building before you get the bid. Often when you don’t get the bid, then you have a whole other issue.

What was your process researching this book?
Jon Pack: I tend to like to do a lot of research, but I try to not think too much. I get a basic idea of where everything is, get a little bit of the history, and get a local guide, especially when they don’t speak English, and get dropped down into these places and have someone who knows about it talk about it. In some places like Athens, it’s impossible to get access, the Olympic areas are locked down, because 21 out of the 22 venues are out of use since they can’t afford to maintain them. They’re having serious money issues and are reticent to have press or photographers walk around, since it’s a bit of an embarrassment to the government. In Sarajevo, they were really open, no guards. It was great to have a local guy. It was amazing. I let him direct me, and got ideas as friends over dinner. They’d have ideas of where to go next. Most of the venues aren’t being used for what they’re intended for; people are skating around the luge, camping around it. We wanted to get a sense of the city and the people, and weren’t really that interested of abandoned stadiums.

Limited-edition copies of Olympic City will be shipped June 21 (10” x 10”, 240 pages, clothbound, designed by Paul Sahre with a foreword by Michael Kimmelman) in regular, deluxe and ebook editions. An exhibition featuring 50 photos from 13 cities covered in the book will open at powerHouse Arena in Brooklyn this Friday, June 21, 6pm-9pm.