Koushik: Out My Window 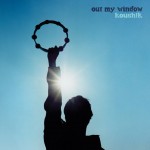 On his “official” debut, Koushik mines ’60s psych and folk, producing staggered beats and melodies that are at once hazy and refracted, like sunspots on a camera lens. Partly shaped by Koushik’s voice, the mood is also dictated by the album’s overall pace — deliberate, contemplative beats occasionally bunch up and explode into something feverish and rapturous. Drenched in echo, Koushik’s breathy voice is otherworldly, brightening up sleepy grooves like “In a Green Smile” and “Coolin.” Nothing clicks quite like “Be With,” an older single tacked onto the album, but, generally, that kind of summer-jam shuffle isn’t what he’s after. Four Tet and Caribou have mined similar territory with enviable intensity, but Koushik’s tracks are more serene and fleeting, mixing smoky atmospherics with sunny harmonies.