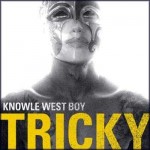 A lot has happened since Tricky dropped twisted, shape-shifting trip-hop classic Maxinquaye in 1995. Now a daddy with a teenage daughter by vocalist and former collaborator Martina Topley-Bird, the Bristol-bred artist (born Adrian Thaws) is taking great pains to remain animated and kinetic as he enters middle age. Named after the Bristol neighborhood in which he was raised, Tricky’s latest album, the eclectic Knowle West Boy, continues to incorporate guests, as well as the producer’s own raspy lead vocals into aggressive singles such as “Council Estate.” In addition to new tunes, Tricky has also turned label impresario, working on the Brown Punk imprint alongside Island legend Chris Blackwell. Earplug’s Patrick Sisson spoke to the artist about paranoia, fighting skills, and the joy of genre tags.

Earplug: It seems like “Council Estate” is your answer to people who said you can’t do anything or go anywhere if you come from Knowle West…
Tricky: Well, yeah. The track is me saying to kids in council estates that you’re a superstar; you’re success waiting to happen. I am the same person who grew up there. At my school, there were teachers who said, when you go for a job interview, as soon as they know you’re from Knowle West, you’re not going to get the job. I’m glad that teachers told me that, “You’re kind of a no-hoper.”

EP: Many of your songs mention paranoia or being watched. How do you feel about the growth of a surveillance society, especially online? Do you think some things you said in the past are coming true?
T: Yeah, it’s scary. I’ve got my laptop at home, and I’m scared to go on it sometimes, know what I mean? It’s like people can hear your music and stuff. It’s becoming apparent we’re a controlled society. And the more things happen, the more we get controlled, so it’s scary times. You can’t challenge the state. They’ll squash things beforehand. Black America had Martin Luther King and Malcolm X — there won’t be anyone like that now. I think the closest we got to that now is Michael Moore. I think he’s incredible. But he can get his films out, and nobody does anything. He can’t do anything.

EP: A lot of your music talks about women or features female vocals. Why is that so important to you?
T: Because I never had any male role models. I was brought up by my grandmother and my aunty. I was disciplined by women. I was loved by women. I didn’t see my dad. This is why I’m not a tough guy. A lot of the men in my family — my uncles and my brothers — can fight. They’re really good, natural fighters. I don’t think there’s a man in my family who can’t fight.

EP: Are you a good fighter?
T: No, I’m the only one who can’t. My sister is tougher than me. I think it’s just because of the women thing.

EP: There’s a lot of guitar on the new album. How important was pop and punk music to you when you were growing up?
T: Growing up [in the late ’70s and early ’80s] was the best time in England. Even if you weren’t a punk rocker, you saw it. Punk was like Sid Vicious. I think he was fucking incredible as a human being. Not as an artist, because I think he’s a shit artist, to be honest with you. But he had a style about him, just, “Fuck you.” Even if it was makeup or manufactured, he pulled it off. That’s a really big part of my life. I grew up with that attitude.

EP: Do you think you’re still able to make music in this day and age that says, “Fuck you”?
T: I think it’s even easier now. If you just be yourself, you’re going to stick out like a sore thumb, because everything sounds the same. If you’re true to yourself, you will say fuck you. Everyone is manufactured. It’s turned into a big business.

EP: How do you find your collaborators, especially your vocalists?
T: It’s usually friends or people I meet, or people on the street. It’s usually very casual, you know? Anybody can do a vocal. Give me ten people off the street who have never sung before and I can get a vocal out of them. Everybody has got something to give.

EP: How does it feel having other people use your words in your music?
T: I get honored when a voice is singing my lyrics. I write the piece of music, then the lyrics and the melody. And by the time I do that, the last thing I want to do is stand up and get in front of the mic. I want to hear it. And sometimes when you’re doing vocals, you don’t experience it. When you’re singing it yourself, it’s not as fun. You don’t see any magic.

EP: Dub and reggae have been significant influences in your music. What are your thoughts about dubstep?
T: I’m so naïve, right? The first time I heard the name dubstep, it was on the Internet. I didn’t know what it was, and I still don’t know if I’ve heard it yet. I must have heard it, but I wouldn’t know what it was. I don’t know much about that. But the term dubstep certainly sounds better than trip-hop. If you’re going to get stuck with a name, I’d rather get stuck with dubstep. Trip-hop is the worst name; it just sounds so stupid. It’s like, trip-hop… what the fuck?