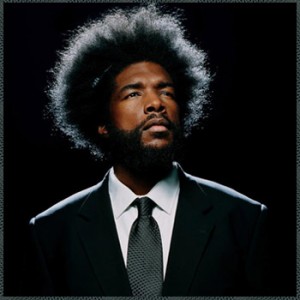 As ESPN readied Monday Night Football before this summer’s cable premiere, the network brass decided to record a new version of the iconic theme song, a program staple since 1989. They assembled a musical dream team for the session, including Little Richard, Aerosmith ax-slinger Joe Perry and Bernie Worrell and Bootsy Collins from Parliament Funkadelic, all larger-than-life instrumental superstars. Ahmir Thompson, better known as Questlove of the Roots, filled the drummer’s chair.

“That was the zaniest experience I’ve ever had,” said Questlove. “It was cool to be chosen, plus the organizer was Little Steven. It took everything in me not to ask him about the last eight episodes of The Sopranos.”

Large, jovial and blessed with a towering Afro, Questlove comes off as humble and friendly, launching into epic stories at a moment’s notice. He could be called an average go-to guy if he didn’t play that role for many of the biggest names in music and entertainment. He’s produced albums by Common and D’Angelo. He’s worked with Erykah Badu and Christina Aguilera. Dave Chappelle tapped him to be music director for his groundbreaking comedy show and movie, and when rap mogul Jay-Z staged a live performance of his Reasonable Doubt album at Radio City Music Hall this summer, Questlove was there directing the show. But, as Questlove would be the first to point out, these are side projects. His main role is the drummer — or, as he sometimes says, traffic director — for the Roots.

The Roots began when Questlove met Tariq Trotter, better known as the rapper Black Thought, in 1987 at the Philadelphia High School for the Creative and Performing Arts. Their first appearance was a Valentine’s Day talent show where they lost to future members of Boyz II Men. Refining their unique take on live hip-hop by staging impromptu shows on Philadelphia street corners, the duo grew to a full-size band and was eventually scouted out and signed to Geffen, beginning a career filled with critical, if not exactly commercial, success. As tight as the major touring funk groups of the past, the Roots are repeatedly praised as the world’s best hip-hop band, often ending shows with free-flowing jams. Rolling Stone’s Touré went so far as to write that the group is “so important to the overall well-being of hip-hop, if they did not exist, we would have to invent them.”

Though often lumped with other underground hip-hop groups because they eschew lyrics about bling, bitches and drug dealing, the Roots resist such easy stereotyping. Constantly reinventing themselves for each album, the group took a creative leap with its new album Game Theory. The first on the new Def Jam Left imprint, it’s a dark, introspective and political opus that contains some of their best work. Speaking over the phone from a hotel room in St. Louis during a break in the Roots’ recent tour, Questlove talked to Playboy.com about the band’s experiences with Katrina, how a few seconds of music changed Chappelle’s Show forever and the joys of breakfast with Prince.

Playboy.com: Do you think hip-hop’s reaction to Hurricane Katrina was as big as people expected? Were enough people speaking out about it?
Questlove: To really get political, you need to set yourself apart from capitalism. That’s why people get leery when Bono comes around with his agenda. I find it disheartening that entertainers have more power than politicians or parents. But at the end of the day, most artists don’t want to fuck up a good thing by rocking the boat. I personally can’t afford to rock the boat. I don’t have a yacht yet. There’s no boat for me to rock.

Playboy.com:Would you have said something like Kanye did if you had the chance?
Questlove: I don’t know. They would never allow me to stand next to Mike Myers to say it. I’m very dismayed about the whole political process. I’ve called organizations during the election period and asked why the Roots haven’t been invited to play voting drives. They want the big name and I’m not a big enough celebrity. To me, it’s still the same double standard. Hollywood rules. That’s what makes me leery about it.

Playboy.com: How much did Katrina affect the mood, lyrics and darker feel of your new album?
Questlove: One hundred percent. The reason this album sounds like it does is strictly a timing thing. We initially wanted to work with an outside producer, and seriously considered Jon Brion, who did the soundtracks for P.T. Anderson’s films. But between leaving Geffen and signing to Def Jam, we had a four-month blackout without a recording budget and couldn’t start. I guess Kanye had the same ideas, since he started working with Brion on Late Registration. We needed a new angle and decided to try the Graceland approach. Let’s go somewhere cool and get inspired. But again, no budget, so what’s the coolest city nearby? New Orleans. We went there and found this brass band, the To Be Continued Band. We were going to work with them and go the total brass route on the album. Then, to make ends meet and generate money to start recording, we toured around Europe starting last July. Then Katrina hit. And afterwards, we literally lost that band. We didn’t find them until October.

Playboy.com: Were they spread out in different cities around the country?
Questlove: At this point, I don’t even know where three of the members are. We found eight of them. They all couldn’t find each other after losing cell phone service and numbers.

Playboy.com: How did you first meet Tariq?
Questlove: First day of high school in 1987. I sort of compare it to when Jennifer Grey, Ferris Bueller’s sister, met the thug dude, Charlie Sheen, in the police station. I was the good guy. That was the first public school I ever went to, my shit was always sheltered in private schools with only like 20 students. Tariq was getting suspended on the first day of school. I think the story might have gotten embellished, but allegedly he was getting some in the bathroom. He set his rep, so I started talking to him.

Playboy.com: How did you get into music growing up?
Questlove: My parents were encouraged by their doctor friends and the post-hippie community they ran into in West Philadelphia to let me explore and find my talent. In black households, you’re not allowed to play with your food. You better eat it, or else. But my parents, they let me do my thing and beat the shit out of pots and pans and eventually get into music. I loved the Jackson 5 growing up. They were like an occupation. Adults would ask me what I wanted to be. I said, “Jackson 5.”

Playboy.com: Former Roots member Malik B, who left the group years ago, has a few guest spots on Game Theory. What happened?
Questlove: Malik’s return to this record was like when Matt Damon solved all those math equations in Good Will Hunting. We had a brand new engineer at the studio, and Malik just appeared one night and told him to set up a mike. He didn’t know the history of the group, that Malik wasn’t a member anymore. He just thought he was one of the Roots and let him record some lyrics. Our producer called me at 3 a.m. and played it for me. I was like, “What the fuck, is that Malik?”

Playboy.com: Had you talked to him before you made the record?
Questlove: I haven’t talked to him for two years. I don’t even know how to contact him to thank him. He was on some Zorro shit and came back a few more times to record tracks. Tariq saw him, but I physically haven’t seen him for a second. That’s how he’s always been. Comes like a thief in the night, does his thing and [whoosh] he’s out. He should be MC Enigma.

Playboy.com: Was there pressure to make Game Theory sound a certain way, since it was your first album on Def Jam?
Questlove: At the end of the day, the Roots are our own island. For me, I know people had their ideas, that we were going to do a lot of collaborations, but at the end of the day, we sort of wanted to have people think one particular way and fool them and do a totally different album. I know this isn’t the album people thought we were going to create for Def Jam.

Playboy.com: How different is the record industry now from when you started out?
Questlove: The early ’90s were a very different period than 2006. When we signed, we were guaranteed three records and couldn’t be dropped. At the time, Geffen had tons of money. Guns N’ Roses, Aerosmith and Nirvana were writing their ticket. But all that came to a screeching halt the day Cobain committed suicide. We freaked, thinking the label would drop us, and called all our reps. Nobody answered. We thought we were about to get fucked and decided to take our recording budget out of the bank real quick. That’s how loose money was then — we were in charge. Then we just went to Europe.

Playboy.com: You toured Europe?
Questlove: No, we moved to Europe. We ran away, got a crib and did a tour. Literally, it wasn’t until seven months later that Geffen knew we were missing.

Playboy.com: How did you patch up that mess with the label?
Questlove: They believed in us and stuck with us. I think we were truly the last example of artistic development. Now it just doesn’t happen. You get one single and you have to make it happen.

Playboy.com: How big an affect do sampling laws and rights payments have on modern hip-hop?
Questlove: It has absolutely destroyed classic hip-hop. It’s based on sampling other people’s material. When I first heard It Takes a Nation of Millions by Public Enemy, I started putting it all together. This music is the same stuff in my father’s record collection.

Playboy.com: Is there a way to do it correctly and regulate sampling?
Questlove: I wish there were a law where you could establish a really fair flat rate. Now, to use one grunt from “Jungle Boogie,” you have to pay $10,000 and give up a certain percentage of the song. But that’s the suits. That’s why I was brought in to do the musical stuff for Chappelle’s Show, so I could barter and bypass the suits. Case in point: Lil’ Jon. The whole premise of Lil’ Jon doing the “Yeah!” and “OK!” shit? It was simply because we wanted to use one of his tracks in season two. The suits wanted $40,000 for five seconds. We’re a cable show, not happening. So I make a call and Lil’ Jon is like, “Make me a skit.” Next thing you know, Dave does the skit.

Playboy.com: The whole motivation to do those sketches was to clear one sample?
Questlove: Lil’ Jon said, Put me in one of your sketches and I’ll waive the fee. Sometimes you just need to bypass the suits.

Playboy.com: What about the Prince sketch on Chappelle’s Show? How did that work out?
Questlove: Thank God for Common’s album Electric Circus. Prince was generous enough to let Common and me rummage through his Paisley Park Studios when we recorded that record, so I knew him when we started doing music for the sketch. But here’s the funny thing. The week that skit premiered, Prince did a show at a club in New York. Dave, me and some other guys from the show were in the audience. During the show, Prince stopped his band and started playing with Dave, playfully doing lines from the skit and having fun. He invited us to his hotel afterwards and, yes, he had breakfast for us.

Playboy.com: Did he cook you pancakes?
Questlove: I don’t think he made them. I think he got take-out.