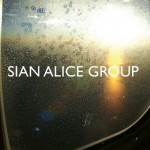 The rock aesthetes in Sian Alice Group have a fetish for tones and textures, from electronic pulses and Velvets-like riffs to scratched guitar strings, which they tweak, layer, and slowly fade throughout their songs. Much of the London group’s sparse music floats by effortlessly without much rhythmic variation, yet it still leaves a strong sonic imprint. On Troubled, the band’s hip eclecticism results in more hybrids, like the spy-thriller techno pulse of “Vanishing,” the slow-burning minimalism of “Love That Moves the Sun,” and the cold, expansive title track. Singer Sian Ahern is still hard to read, switching between pastoral softness and bluesy outbursts but never fully emoting. A similar sheen coats this album, cool and detached yet slightly smoldering.