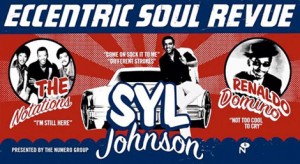 His Comcast uniform didn’t meet the usual sartorial standards of soul crooners. But a glance at that belt buckle—the name “Renaldo” in bold brushed metal—suggested there was plenty of funk left. It was rehearsal night for the Eccentric Soul Revue, an upcoming concert focused on an obscure chapter of Chicago history, and Renaldo Domino, 59, was getting reacquainted with music he hadn’t touched in three decades. As the backing band moved through tracks like “Not Too Cool to Cry,” Domino’s hips loosened and the gears began to grind. That sweet-as-sugar tone returned. “It’s in my blood,” he said.

The Eccentric Soul Revue, presented on April 4th by the local re-issue label Numero, won’t just be celebrating history. It’ll be reinventing it. The featured musicians are a mix of active performers (such as the headliner, Syl Johnson, and the Notations) programmed alongside people who haven’t played professionally in years. What they all have in common is an association with Twinight, a phantom Chicago soul label that started in 1967 and disappeared by 1972.

This reunion of artists fits Numero’s aesthetic perfectly. The label is known for its “eccentric soul” series, compilations of forgotten sounds that are lovingly assembled after exhaustive research and detective work. But the label has never done a concert. “We try to have new experiences in every record, and this is our way of doing it totally outside of the recorded realm,” said Numero’s Tom Lunt. The staff tracked down performers for the event, found a venue (the Park West), and have even assembled a memorabilia-filled slide show. Many of the artists, like Domino, feel good that people still care about their music. But for Syl Johnson, there’s a little bit of the original motivation: “I wouldn’t be singing this if it wasn’t for the women.”