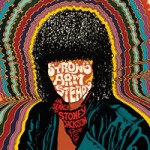 Finding patterns in Madlib’s rambling yet brilliant production work can be difficult, but on his new In Search of Stoney Jackson album, he doesn’t take long to zero-in on some recurring themes. An obscure sample ushers in “Chittlins & Pepsi”, a stick-to-your guts blend of flashy soul and food-based free association. Meanwhile, pot ramble “Cheeba Cheeba” is anchored by resonant strings and a fluid bass line inhaled and exhaled between minimal beats. It may sound like Doom’s M.O.– tracks seemingly teed-up for the masked marauder. But L.A. hip-hop collective Strong Arm Steady provides the lyrics here. Once the home of auto repair hypeman Xzibit, the crew now stands as another entry in a long line of Beat Konducta collaborators.

Stones Throw has been widening its circle of L.A. connections recently, including putting out the acclaimed Dâm-Funk album and reissuing Arabian Prince tracks. This post-Death Row SoCal crew– which has been reduced to core members Krondon, Phil Da Agony, and San Diegan Mitchy Slick for this release– has seen its underground profile rise slightly this past year due to a middling Clinton Sparks mixtape and a forthcoming album on Talib Kweli’s Blacksmith label.

The group’s experience working the L.A. scene and slinging mixtapes shows on In Search of Stoney Jackson. In the enviable position of getting a slate of Otis Jackson, Jr. beats to work with, Strong Arm Steady do raise their game, but rarely rise above workmanlike wordplay. They provide vocal diversity but never overshadow or own a track, only accenting different aspects of Madlib’s work. Phil Da Agony’s curt, taunting flow, filled with bent phrases, darts around between measures. Albino rapper Krondon has a deeper, rounded tone, which plays well on the chorus of the dark “New Love”, and Mitchy Slick sounds passable on the few tracks he appears on. Along with a roster of collaborators, like Planet Asia and Stones Throw standbys like Oh No and Guilty Simpson, it adds up to a set of solid yet often unremarkable lyrics staking a comfortable perch atop another stellar Madlib production workout.

Filled with funky vocal samples, discursive monologues and the inevitable dry coughs, the music is the centerpiece and bears Madlib’s signature hazy melodies and blunted edges. But there’s a muscular feel to many of the tracks, meaty beats anyone would be happy to rap over. “Best of Times”, featuring Phonte on the chorus doing his best John Legend, is a slow-rolling, soulful piece built on a solid foundation, a warm bass lick and almost metronomic four-beat rhythm. “Pressure” bumps with oscillating synths and a stiff, crisp beat. “Questions”, which starts out sounding like a washed-out TV theme and then pivots on a big, bulbous bassline, is simple but effective, accented with subtle vibe hits and a single wiry guitar chord. For all Madlib’s eclecticism and supposedly short attention span, his work here sounds focused and sharp. The beats aren’t wasted here by any means, but a different crew could have brought out even more potential.