10 Things You Didn’t Know About Charles and Ray Eames 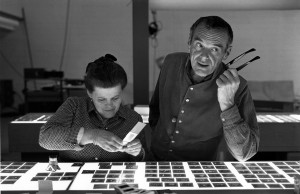 Clowns, churches, and an aquarium: Find out how far the boundless curiosity of Ray and Charles Eames stretched.

“It makes me feel guilty that anybody should have such a good time doing what they are supposed to do.” It’s easy to imagine Charles Eames laughing with joy after uttering those words, a precinct summary of the way he and his wife and collaborator Ray viewed work. Their incredible accomplishments—spirited, human-centered design unbound by medium—seem like the byproduct of a state where work is play and vice versa.

And while their work in furniture, filmmaking and exhibition design is well-documented, there’s even more to their restless creativity than you might imagine. Dwell spoke with Daniel Ostroff, film producer, design historian, and editor of the forthcoming An Eames Anthology: Articles, Film Scripts, Interviews, Letters, Notes and Speeches by Charles and Ray Eames (Yale University Press), and Eames Demetrios, artist, principal of Eames Office, and grandson of the famous couple, to uncover underappreciated and relatively unknown stories about the design icons.

1) They Wrote the India Report, Which Shaped the Future of Design

Concerned with the deterioration of the quality of consumer goods in their rapidly changing country, in 1958, the Indian government and Prime Minister Jawaharlal Nehru enlisted Ray and Charles Eames to formulate a plan to invigorate industry and jumpstart design. Drafted after three months of exhaustive study, the epochal India Report reads like a master textbook on user-centered design. The report’s power lies in its lack of preconceptions, the way it linked design with values, and the author’s appreciation of the subject and vernacular. The foreword quotes the Bhagavad Gita and methodology is explained via a design case study on creating a better lota (the traditional water vessel). Even more refreshing was the lack of East/West dynamics: “The medium that is producing this change is communication; not some influence of the West on the East.” The report’s suggestion to create a design school was adopted, and in 1961, the National Institute of Design opened in Ahmedabad. The Eameses would return in 1964 to help mount the exhibit “Nehru: His Life and His India,” with NID students.

2) They Were Great Friends with Billy Wilder

“Charles used to say they learned more about architecture from watching a Billy Wilder film than talking to most architects,” says Eames Demetrios. That kind of deep-seated respect formed the basis for an enduring friendship between the Eameses and the famous American director, supposedly kick-started when graphic designer Alvin Lustig introduced Charles and Billy. The director’s influence ran deep. He was the inspiration for the first Eames Lounge Chair, a replacement for the makeshift chairs Wilder napped on between takes that was deliberately designed to be narrow (so anyone falling into a deep sleep would hit the side and wake up). The Eameses, who at one point even designed a home for Wilder, also contributed to his filmography: Ray designed the typography for the opening credits of “Love in the Afternoon” (1957), while Charles shot second shift for “Spirit of St. Louis” (1957). Perhaps the most telling story was that when Billy and Audrey Wilder went to Lake Tahoe for their honeymoon trip, they invited the Eameses to tag along. Talk about a fascinating double date.

More than half a century before the Oculus Rift made headlines, the Eameses were dreaming up and designing immersive cinema experiences. “Glimpses of the USA” from 1959, a feel-good propaganda film that debuted inside a golden Buckminster Fuller dome in Moscow, featured quick-cut images of American domesticity flashing on seven screens and an air-to-ground zoom that presaged “Powers of Ten.” Nearly three millions Russians saw the show; supposedly the floor had to be resurfaced multiple times to keep up with the foot traffic. “House of Science” (1962), which played at Seattle’s World Fair, saturated a curved oval screen with multiple projections and pictures, a carefully choreographed blend of rhythm, perspective and speed. As scholar Beatriz Colomina noted, “The Eameses’ innovative technique did not simply present the audience with a new way of seeing things. Rather, it gave form to a new mode of perception that was already in everybody’s mind.“

4) They Turned Down a Chance to Redesign the Budweiser Label

Few stories proved the Eameses commitment to “innovate as a last resort” more than their brief dalliance with the King of Beers. When Budweiser came calling, it was to offer one of the most lucrative gigs a designer would ask for: logo redesign for a multinational corporation. The Eameses considered the opportunity for months, before replying that there wasn’t really a good enough reason to change it, so they couldn’t do the job.

Designed to avoid Dutch Colonial cliches, the Zeeland, Michigan home of Max De Pree—son of Herman Miller founder D.J. De Pree, and later the CEO—melded local style and history with Scandinavian cool, including a sleek vertical shape and a cedar exterior. Supposedly during a meeting to discuss the project, the client, expecting to discuss specific features, was thrown off guard when Charles’ opening question was, “Tell me about the family.”

6) They Loved and Appreciated Clowns and the Circus

Clowns supposedly engaged Charles Eames from childhood. At a party in 1953, he had Ray paint his face in a white-and-black modernist grid as part of a clown costume. Ostroff said they loved entertainment that combined great fun with great diligence and effort. Their attraction to clowns led to “Clown Face!” a 1971 training film and face-painting tutorial for students at the Ringling Bros. and Barnum and Bailey Clown College in Palmetto, Florida. Charles eventually became a school trustee.

7) They Designed a National Aquarium in Washington, D.C. That Was Never Built

It promised to be one of the most engaging museums the country had ever seen. Fresh off decades of designing forward-thinking films projects and immersive public exhibits, the Eameses were asked to create a national aquarium in Washington, D.C. Demetrios said the goal of the proposed National Fisheries Center and Aquarium was to “give people an intense visceral feel of the thrill of science.” Budget cuts in 1969, right as the Nixon administration ramped up the war in Vietnam, made sure the idea never got past the concept stage, but their ideas are preserved in the 11-minute film “Aquarium,” including living ecologies.

In 1959, the Eameses prototyped what might have been the coolest of Mid-Century Modern collectible; a dollhouse done in the modern style of their own home, outfitted with miniature models of Eames furniture. The toy was never brought to market, frustrating generations of future design fans.

9) Charles Designed a Series of Churches in the ‘30s

During the depths of the Depression, before he met Ray at Cranbrook, Charles supported his family (first wife Catherine Woermann and daughter Lucia) with a series of architectural commissions, including a series of churches and homes in St. Louis and Arkansas. St. Mary’s Cathedral in Helena, Arkansas (1934), which he supposedly called one of his favorite pieces of work, blended modern and Medieval forms, from the brickwork to the brass globes with striking star-shaped cutouts. A write-up of the project impressed Eliel Saarinen enough to contact the young architect and offer a Cranbrook fellowship.

10) They Created the Best-Selling Airport Seating in the World

Think the Eames Molded Plastic Chair is their most popular piece of furniture? If you’re measuring by widespread adoption and use, Eames Tandem Seating (ETS) wins, hands (and backsides) down. Developed in 1962 for O’Hare Airport, the seating system epitomizes rational, situation specific design. The seamless back pads and seat pads are easy to clean and interchangeable, making it easy to swap out and replace. Ostroff said they were designed to be “light enough that the airport maintenance people could pick up a row of ten and sweep under it.” There are even a few rows in the Apple Store in Santa Monica.