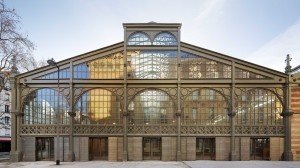 When the newly restored Carreau du Temple, a marketplace and exemplar of 19th century French construction in Paris’ Marais neighborhood, officially opens to the public on April 25th, it won’t merely be an achievement in architectural preservation. By literally exposing this glass-and-steel giant to the surrounding area with a more open floor plan, the new design may create a formidable nexus for arts and culture in the French capital.

“Many structures like this were destroyed at the end of the 19th century and during the 20th century, and for me and a lot of Parisians, they’re a great memory,” says Jean-François Milou, an architect whose Studio Milou renovated the pavilion. “It’s incredibly beautiful architecture.”

The slow restoration process, which began eight years ago, has gradually unveiled a new, beautiful second life for the building. A public poll to determine a use for the structure, which at that point was home to just a few shops, illuminated the community’s desire for a multi-use sports and cultural building. The implementation of Studio Milou’s award-winning design was occasionally held up by archeological discoveries—worth the wait in in an area that was the site of a Knights Templar fortress and a prison that held the royal family during the French Revolution. This was standard procedure for a firm versed in historical renovations, but working on this pavilion, a Parisian gem in the same Marais neighborhood as Studio Milou’s office, took on special significance.

“Because it’s one of the only remaining examples of this type of architecture, we have a responsibility to make the restoration ideal,” Milou says. “We wanted to make it even lighter than it was, even more free, to truly open up the roof and the envelope.”

In a back-to-basics move, Milou and his team exposed the structure’s roots, removing the exterior brick walls, decades worth of ducts and additional material to expose its simple steel skeleton and let the light flood in. Sunlight circulates through the open interior, nearly 40 feet high at its apex, and the building’s glass curtain creates an interplay between the interior and exterior. With the addition of a bi-level basement containing all the working elements of the structure, the ground-level mezzanine remains unencumbered and adaptable to any number of events. (It’s set to be a leading site for runway shows in the city’s new fashion district.) Even the palette—blue-lacquered steel, chestnut wood, and a gray-and-gold interior—reflects the shades and gradients of the Parisian sky, and reflects the simple truth that in this environment, perhaps an architect’s greatest gesture is to let people enjoy the surroundings.

“You can see the garden and street outside, and what’s happening inside,” Milou says. “It captures that feeling of being in Paris, the subtle light of Paris.”