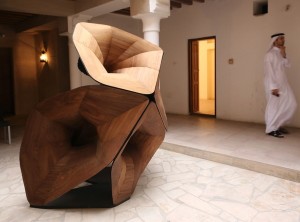 Stacked like a cubist version of a custom phonograph, Resonant Surface 01 by architects and designers Christine Yogiaman and Kenneth Tracy looks like a bespoke, steampunk soundsystem. But when you talk to the creators about their installation, which debuted in a Dubai courtyard this March during the Sikka 2014 art fair, it’s clear they’re broadcasting bigger ideas of cultural remixing and reinventing.

“We’re drawn to this aesthetic,” says Tracy. “I like how the Islamic patterns comes from geometric and abstract patterns, without icons or human forms.”

The design duo both teach architecture at the American University of Sharjah, the emirate next to Dubai, and have become engrossed with Islamic design, and the incredible abstract patterns found on screens and interiors. They’ve also become fascinated by the look of mosques and minarets, balconies now crammed with speakers so muezzins can call the faithful to prayer. Resonant Surface 01 integrated these two interests as a way to introduce aesthetics into sound reproduction and “create a surface whose primary goal was to omit sound.”

Seven horns crafted from wood veneer, each measuring 10 feet long, have been coiled and shaped together to help amplify a person’s voice, separated by 6-millimeter thick aluminum frames. The shape, initially a geodesic dome in the Buckminster Fuller mold, was reshaped into a bent octagon to accommodate the horns. The installation, which works as a resonating engine just like a trumpet horn, distributes the sound so well, it’s actually hard to hear yourself when you’re standing behind it. While it was first displayed as more of an architectural abstract than an actual addition to a minaret, Yogiaman and Tracy, who have also done extensive work in Indonesia, are exploring the idea of designing a mosque and integrating this design. After a contest last year to redesign the mosque in Kosovo attracted international attention, the duo believes it’s a great time to experiment with and elaborate on such a rich design heritage.