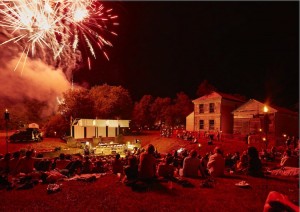 A bold experiment in demystifying and democratizing architecture, Auburn University’s Rural Studio, founded by Samuel Mockbee and D.K. Ruth in 1993, has overseen the construction of a menagerie of modernist structures in rural Hale County, Alabama, including the affordable 20K House. And while the work of generations of students stands as a testament to the commuity benefits of sustainable, human-centered design, the program’s influence in the field of architecture and its important role in the community suggest that its role building doesn’t end with just structures. Dwell spoke with director Andrew Freear and Elena Barthel, a professor who oversees the Rural Studio Farm, both co-authors of the new book Rural Studio at Twenty: Designing and Building in Hale County, about current and future projects, and the expanding role of farming and agriculture within the program.

Where do you see the program heading in the future, especially considering how sustainability becomes more and more relevant?

Andrew Freear: We’ve been here for 20 years. Instead of seeking survival, the program can say it’s not what we can do, it’s what we should do. I think that our community projects are always either educationally based or based on community welfare, such as the Boys & Girls clubs. Our challenge isn’t just to create those buildings and hope organizations survive, it’s how we help them survive. We built a new volunteer fire department in Newbern, and them not having to worry about their building allowed them to go gangbusters in supporting their organization. Our student’s expectations are to build, and that’s not always the answer. How do architects get involved in helping organizations sustain themselves? How do we keep going in the next 20 years supporting these organizations?

To be sustainable, you only want to build it once.

Andrew Freear: We don’t have to build for the sake of it. We tell our students, you have a privileged opportunity here. But just because it’s a design program, it doesn’t mean you’re going to build something. You have to prove that it’s needed.

Elena Barthel: The way our studio works with the community, it’s like osmosis, it’s empathetic. Twenty years is a lot of time to build up this relationship. You need to maintain your empathy with the surroundings. It’s not something you can design sitting at a table — it’s what happened when you live in the same place, experience the same weather.

Andrew Freear: The program is very proud that it’s Alabama kids doing work in the backyard of their university. Sometimes it can take an outsider to say what’s beautiful about the place. The insiders are in the weeds. The danger for us is that we’ve been here too long, and you’ve been here too long and you’ve become too familiar. The program is open year round, the office is always open. Students stay here for years and really start to put down roots. We’ve had kids stay here and get married. I have access to all of the local politicians by cell phone directly. Were we in, say, Chicago, the firewall in front of the people who make decisions is immense. And that fact that I can call them, or they can call me, that’s a big deal. They’re started to recognize us as a resource.

There’s a big argument to be made about having a footprint in the community. You really get to understand the environment, as opposed to being flown in for just one project.

Andrew Freear: It’s an incredible opportunity for us as architects and as teachers. We have 150 projects in a 25-mile radius. If we don’t learn from our mistakes, we’re asking for an ass-kicking. What’s changed over the last 20 years? It’s about self-preservation. You need to build buildings that last. You have to make them as sustainable as you can. Here, there’s a continuous feedback loop. It’s tough but it’s great. Beautiful, affordable rural housing will always stay on our agenda. That goes back to our roots. That’s more relevant every day. The future, as we discuss in the book, is moving the 20K House forward. This year, we’ve been looking at two-bedroom homes. We’ve spent so long looking at one bedrooms that two is suddenly a new challenge. It’s going to be more difficult than we thought. Then there’s the farm question, how we live and eat. Our initiative to try and feed ourselves and understand more why people don’t grow their own vegetables here has been a very difficult exercise. You really do learn by doing; we’re not farmers. It’s a fast food landscape and a fast food culture—changing that isn’t going to be an overnight thing.

Elena Barthel: The more we go ahead, the more it’s clear this is a culture and architecture project. In the next few years, we’ll continue to build up the culture of local fresh food within our students and community, increasing our infrastructure. We want to include students in every stage of the process, from seeding and growing to cooking. In parallel, we’ll continue to support the local farmer’s markets. What we do for ourselves and the community is in parallel.

Andrew Freear: You’re in rural Hale County, in West Alabama. You’d think you’d have the most immediate access to fresh food and produce, but it’s actually the opposite. Everyone drives 10 miles to the supermarket. Cheap mobility has almost destroyed a culture, and cotton was farmed so intensely that the topsoil was destroyed. We’re building a greenhouse to help extend the growing season, because the plants burn in the summer and drown in the winter.

Elena Barthel: The idea is to design and build our own farm as a prototype to extend out of the academic community. We’re building an irrigation system based on gravity; water is collected off the roof in cisterns, then pumped up into a smaller water tower, then gravity will feed a drip irrigation system. The greenhouse as a whole is a manifesto of sustainable farming.

You have such an established track record in the area, it must make new projects so much easier to create.

Elena Barthel: The local farmers all support us tremendously, and are sharing knowledge with us. It’s an exchange, and of course, we have a lot more to learn. At the same time, our infrastructure inspires them. There are local farmers trying to build a solar greenhouse after seeing us build ours.

With the greenhouse and farming focus, you really do add more value to the community and go beyond just buildings.

Andrew Freear: One of the major poverties here is food, and the subsequent health and obesity problems. We have a chart that shows we’re looking at being between 80-100 percent obesity rates. It’s not just a problem, it’s catastrophic. It has implications obviously on the health systems and on the workforce and the kids. It’s this dependence on this corn-based, processed food that’s shipped from so far away, you have no idea what you’re eating.

Elena Barthel: The farm isn’t just about growing, it’s about changing how people eat. The second thing we did was build a kitchen for ourselves and hire a chef, so everyday, the students eat together, and get to appreciate the social aspect of eating. It’s homegrown, fresh, seasonal and high quality. We ask the students to critique their diet, so they begin to understand.

Andrew Freear: The question to ask is, why should food be cheap? Why, for everything else, do we expect to pay for quality, and not do that for food, when it’s something we put in our body?