A Detroit Business Incubator with an Industrial Edge 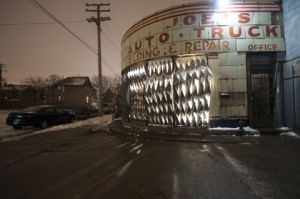 Practice Space“It provides a sense of old and new together, showcasing the opportunity in Detroit,” says Justin Mast, an architect and organizer behind Practice Space. “Development here operates in its own way. People need to figure it out and connect the dots.”

It looks like a small town mechanic’s shop crossed with a Gehry sketch. But for all the excitement happening on the exterior of Practice Space, a business incubator in Detroit, there’s a lot more going on inside, where new businesses are being built. Visually, the burly, brick wall represents the heft and hustle of Motown, while the metal exterior speaks the same techno-utopian language referenced by the city’s forward-thinking techno producers. In short, Practice Space seems to capture a moment in time in Detroit, when revitalization and retooling offer a new vision for old neighborhoods.

“I had just never realized how exciting Detroit was,” says architect Justin Mast, a University of Michigan graduate who helped design, build, and found Practice Space. “There’s so much underutilized space, so much industrial space, and so many people looking to start new things. Detroit should be the best place for architecture right now.”

Broadly speaking, Practice Space supports brick-and-mortar concepts, such as coffee shops and grocery stores, with ideas, introductions to business mentors, and design. With that mission in mind, Mast and his friend and fellow architect Kyle Hoff seized on the concepts of renovation, revitalization and adaptive reuse when they worked on the layout of Practice Space. Their design approach sought to preserve, highlight and play off the character of the 3,800-square-foot space. Much of the original shop was left intact or adapted to fit the building’s new purpose. The car lift, which they originally wanted to remove, would have eaten up their entire $30,000 renovation budget. Instead, it became a freestanding shelf called the archive, filled with records and resources of previous companies and projects. Mast and Hoff then added elements that spoke a more contemporary design language—horizontally stacked plywood, polycarbonate panels and steel tubes—adding forward-looking decorations and structural elements to the workspace and conference areas.

Since opening in September 2013, the space has helped catalyze ventures such as 1417 Van Dyke, a live-work concept, and Offworld, an arcade tavern concept that held a pop-up earlier this year. Mast wants to continue running the self-funded project through the summer session, and then re-strategize and recalibrate, to figure out whether or not Practice Space graduates to something else.

“It provides a sense of old and new together, showcasing the opportunity in Detroit,” says Mast. “Development here operates in its own way. People need to figure it out and connect the dots.”