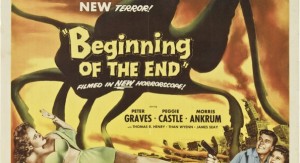 Despite the trauma of 9/11, it didn’t take long for Hollywood to revisit and ravage New York City. In just the last few years, monsters, mankind, aliens, and zombies have laid waste to Manhattan in countless post-apocalyptic thrillers and natural-disaster porn. L.A., admittedly subject to its own different disasters, also gets the cinematic send-off in style. The Capitol Records building usually gets gutted, or the letters of the iconic Hollywood sign get re-arranged hastily. But only a few (mostly campy) disaster movies, horror flicks, and post-apocalyptic films deign to threaten the Windy City. It doesn’t seem worth the trouble to destroy.

It’s doubtful screenwriters have a soft spot for the Midwest. Cheapie ’80s horror flick Alligator featured a Chi-town sewer gator named Rámon that splits a few suburbanites in half. The Relic tells the story of an Amazonian beast that comes alive and wrecks havoc at the Field Museum, but it was only filmed here because New York’s American Museum of History wasn’t available. The only thing that comes close to a post-apocalyptic Chicago movie is Streets Of Fire, a 1984 film set in an alternative future where the ’50s and ’80s (and their respective clichés) are mashed together. Despite our scenic skyline, large population—not to mention cool underground tunnels for the survivors—the city has rarely been threatened with wide-scale on-screen destruction. With that in mind, The A.V. Club presents this list of the handful of movies that get serious about wiping Chicago off the map.

Beginning Of The End (1957)
Plot: Grasshoppers, mutated after eating some radiated, weapons-grade wheat at a government lab, march toward Chicago in this nuclear-age monster flick. While the tagline touts stellar special effects—“So Big…we had to coin a new word for it…NEWMENDOUS!”—it’s a rote exercise in altered perspective and crappy acting. (No wonder it was lovingly ribbed by Mystery Science Theater 3000.) Stereotypically precocious reporter Audrey Aimes (Peggie Castle) and Dr. Ed Wainwright (Peter Graves) warn others while the military considers the Nuclear Orkin option: bombing Chicago to destroy the crazed critters.
Biggest insults to Chicago: Many obvious geographic errors mar this already terrible film: Michigan Avenue is called Michigan Boulevard, forests and trees are shown in scenes depicting the suburbs, and footage of crowds supposedly panicking on the South Side show people fleeing Grant Park. No actual South Side locations are used. Plus, the scenes of bedlam on city streets and abandoned intersections are amateurish. It’s also obvious a Chicagoan didn’t write this film; cicadas would be the local go-to apocalyptic insect.

Damien: Omen II (1978)
Plot: Chicago has been the setting of a few memorable and plenty of forgettable horror movies, like Candyman, set in Cabrini-Green, and Poltergeist III, about a supernatural invasion of the John Hancock Center. (Sadly, that film doesn’t touch on the supposed curse laid down on the building by former property owner Captain George Streeter.) But the Omen sequel is the only one with truly disastrous implications. Damien, older and attending a military academy, deals with the type of adolescent issues we all struggle to overcome, like, you know, discovering a “666” birthmark and realizing you’re meant to enslave mankind. This horror sequel gives both the Windy City and Wisconsin screen time. Hard-knock Northwestern Military and Naval Academy in Lake Geneva, Wis. (since closed and merged with St. John’s Northwestern Military Academy) played the part of Davidson Military Academy, and many pivotal scenes took place in Chicago. Released the same year as The Fury, a Kirk Douglas movie about kids being trained to use their psychic powers to kill, and a few years after Kolchak: The Night Stalker, a series about a newspaper reporter who investigated paranormal activities, this movie was part of a wave of supernatural productions being made in Chicago. It didn’t last long.
Biggest insults to Chicago: In what was either inspired location scouting or perhaps a send-up of Chicago political corruption, the exterior of Thorn Industries, the company run by Damien’s stepfather, was filmed at Chicago’s City Hall. Industrialist Thorn also spreads his money around the cultural world—the exterior of the fictional Thorn Museum of Art was played by the Field Museum, and the interior was shot in the Art Institute.

Category 6: Day Of Destruction (2004)
Plot: This made-for-TV weather disaster movie has a plot that reads like Tom Skilling’s wet dream. Three nasty weather systems—tornadoes from the west, a warm front from the south, and a cold front up north—ultimately converge on Chicago. Brian Dennehy plays weatherman Andy Goodman, who tries warning everyone of impending doom while power outages from the local utility Midwest Electric shut down all communications in the city. A more damaging set of disaster movie clichés rains down on the city.
Biggest insults to Chicago: In addition to the implausibility of a 150-mph hurricane on Lake Michigan, the movie doesn’t actually show much of the real city of Chicago. When the power goes out around the city, the first victim is Wrigley Field during a night game. Cursory references to Chicago streets, like Western Avenue and the Dan Ryan, give the movie local color, but the only noticeable settings are CGI-renderings of a ravaged city skyline. The city does get a bit of sweet revenge for such surface treatment, however, when the storm bends and breaks the St. Louis Gateway Arch.