For those about to book rock: Bands with advice for Lincoln Hall 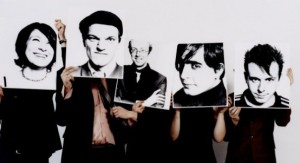 The Chicago History Museum recently put out a call, via its blog, for memorabilia related to the Lounge Ax, the legendary Lincoln Park rock club that closed in 2000. Venues come and go, and few last long enough or make enough of an impact to warrant any kind of canonization. The deceptively simple rules of running a good club—treat the crowd and talent with respect and book good music—aren’t always easy to follow. Lincoln Hall, a new venue run by the crew at Schubas, recently opened on the same block as Lounge Ax. In honor of its second weekend of operation, The A.V. Club asked a few musicians who are playing some of the earliest shows at Lincoln Hall to provide some advice to the owners, and recount their worst venue experiences.

Eddie Argos, Art Brut, playing Nov. 10
Advice: “As a touring band, I’d tell the people that run clubs that it’s a good idea to have a strong lock on the bar. It’s pretty straightforward. Hire a big room, get a PA, and make sure the backstage area isn’t next to the toilet.”
Worst show: “We played a club called Razzmatazz in Barcelona, which is actually a great club, but they were trying out a new PA system. That was quite embarrassing. They put it in wrong. They put the mixing desk behind the stage, so the sound engineer had to run around the stage to hear how things sounded. The sound was fucking awful. The guy was like a big drunk bear running backwards and forwards.”

Jamie Levinson, White Rabbits, playing Nov. 12
Advice: “Bands spend upwards of eight to nine hours a day in vans and vehicles that barely pass inspection just to get to shows. We wouldn’t be offended by any level of hospitality. There’s a club in Birmingham, Alabama, called the Bottle Tree, run by the drummer in Man Or Astro-Man?, that’s all about accommodation. There are Airstream trailers in the back of this humble club, along with massage chairs, great books, and DVDs. It feels like you’re being treated at arena level when you’re just playing a small club show. It’s really a psychological battle on the road. When someone reaches out with an olive branch, it sets the tone for the rest of the day.”
Worst show: “We’re like any other band. There are plenty of nightmare stories. We spent the bulk of our time on the road when we were starting out. You play for gas money, and those are trying times. I don’t think any band expects blue M&Ms in a glass bowl.”

Langhorne Slim, played Oct. 23
Advice: “It’s a pretty easy formula. One thing I’ve picked up on is clubs that are run by musicians tend to be the best in terms of treating touring musicians and sound. They know what makes you feel a little more at home.”
Worst show: “There are probably a few of them. When I first started, I was playing anywhere I could in New York. I would play in sports bars with a big screen above my head as people were trying to watch the Knicks. That was a disaster.”

Cullen Omori, The Smith Westerns, playing Oct. 27
Advice: “It would be great for a new rock club or a venue to be a loft or something free, because people our age don’t want to pay for [a show]. If anything, someone needs to open a space that’s cheap, a good venue and a place to party and hang out. Even the kids that aren’t into music at first can absorb it. We don’t have that right now.”
Worst show: “The worst place to play is probably the Beat Kitchen. The door people don’t care about music. They’re assholes. Our first time out of Chicago, we played at the Painted Lady in Detroit. We played with a band from Italy no one knows about. There was literally one kid headbanging. We got like $17 and we had driven four hours.”