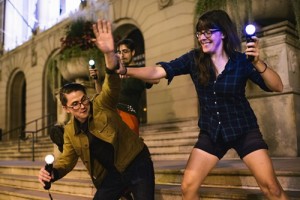 You can hardly throw a game token ten feet without hitting a vintage arcade bar in certain Chicago neighborhoods. The barcade boom has been a boon for lovers of old consoles, and it’s also piqued people’s interest in new indie games created by up-and-coming developers (as evidenced by the popularity of the ten-player arcade console Killer Queen at Logan Arcade). On September 6 at Bit Bash, Chicago’s first indie-gaming festival, it’s all cutting edge all the time.

“There are two parts to this event,” says Ryan Wiemeyer, one of the event’s organizers. “One of them is to throw a really fucking cool party in Chicago so people are jealous of us for once. The other side is to showcase indie-gaming culture to those who don’t normally see it. It’s not all Call of Duty.”

Curated by Wiemeyer and members of the four-year-old Indie City Collective, a nonprofit Wiemeyer formed to support local game developers, Bit Bash is a free arcade with a point of view. A circuit of 30-plus local and international games—from Killer Queen to Johann Sebastian Joust, a complex screen-free game of tag played with motion controllers—provides an overview of indie developers locally and abroad. It’s an object lesson in how the experience and medium of gaming is constantly being reinterpreted and redefined, far away from the multimillion-dollar studio blockbusters that many reflexively think of as video games. Doug Wilson, a PhD from the Copenhagen Center for Computer Games Research who developed Johann Sebastian Joust, said he created his game in part to “bring a game out from the game screen, into the social world in front of the screen.”

Rob Lach, another organizer, developer, and Indie City member, says the event is meant to showcase the fringes of game design, which are finding a home in Chicago. He pointed to studios such as the Young Horses, which came out of DePaul and released Octodad, or Cardboard Computer, which released the unorthodox narrative Kentucky Route Zero, as examples of great local talent.

Bit Bash’s genesis came last March during a developers conference in San Francisco when a breakout session about throwing your own conference led to locals asking, then answering, the question “Why not Chicago?” Wiemeyer, who has success with the popular zombie satire game Organ Trail, which he says has moved more than 750,000 copies, feels the gaming scene here is practical yet filled with experimental studios since there’s a need to invest in your own smaller-scale ideas without the help of the big angel investors found in other tech hubs.

“Chicago is a city of architecture, and that’s how I see games,” says Lach. “It’s a mix between a technical and a creative pursuit—everything has to be built from the ground up. Space is constantly being explored. Not many mediums are filled with such constant newness. This event is a great showcase of this culture.”

Wiemeyer sees an event like this as a way to slowly build a community.

“It’s another stepping stone to becoming a much stronger community with other events and developers,” says Wiemeyer. “The great thing about games becoming easier to make is that we’re getting a lot of different voices. We have games by a trans woman, games by minorities. It’s not all white men. It’s great. You don’t have to be a rich kid to know how to program anymore; that wall is coming down.”

Bit Bash runs from 2 PM to midnight on September 6 at Threadless HQ (1260 W. Madison). At 7 PM new games, live music, and beer from Arcade Brewery will be added to the mix. A $10 donation supports Chicago Loot Drop, which provides games and entertainment for local children’s hospitals.