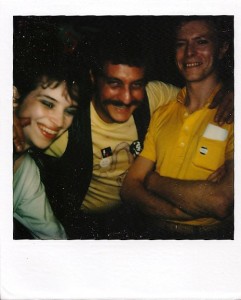 Bowie at Neo in August 1980 with Noni Martin and Noe Boudreau (Photo Courtesy of Ken Ellis, Taken by Gavin Morrison)
As much as David Bowie exuded his own charisma, he understood how fashion could be harnessed to magnify his power and presence: an Alexander McQueen Union Jack coat, faux-punk finery dotted with cigarette burns; or a black jumpsuit by Kansai Yamamoto sporting flared legs and thick grooves, making the wearer appear like some kind of anthropomorphic vinyl record. Amid the costumes and sensory overload of “David Bowie Is”, the retrospective at the MCA, it’s understandable if visitors blithely pass by a lowly white loincloth, a literal undergarment included in one of rock’s most eccentric and influential wardrobes.

But while this piece of fabric may be dull in comparison to Ziggy Stardust’s costumes, it’s a piece of local history. During August 1980, Bowie stayed in Chicago for roughly a month while performing the lead role in the stage show The Elephant Man, the story of the life of Joseph Merrick, a man whose serious deformities made him a freak show curiosity in 19th-century London. Bowie’s audience has celebrated many of his otherworldly characters and the liberation and freedom they have come to symbolize; with this performance he was exploring the concept of alienation, central to his role as the Thin White Duke and to his time in Berlin.

“Watching David Bowie become the Elephant Man, it was so much more than a cap, a hood, and a loincloth for me,” says Julie Weiss, the production’s costume designer. “It was seeing the soul of Merrick scream the line ‘I am not an animal! I am a human being!’ He understands what it’s like to be an outsider. When the audience saw David Bowie playing Elephant Man, they were reminded of the shame we should all feel rejecting those who are different.”

Elephant Man director Jack Hofsiss, who sought out Bowie for the part (replacing Philip Anglim), felt the singer’s background made him a good fit for the challenging role. At that pre-Labyrinth point in his career, Bowie’s acting resumé included a background in mime (see the Heroes album cover), a starring role in Nicolas Roeg’s 1976 film The Man Who Fell to Earth, which dealt with themes of isolation, and a role in the flop Just a Gigolo, a film so bad he told NME it was “my 32 Elvis Presley movies contained in one.” Hofsiss asked Bowie to be part of the show through a mutual friend who owned a club in New York called Hurrah; though the album Scary Monsters would be released during the play’s run, the dates worked out. The pre-Bowie production of the play won a Tony Award in 1979, but the idea of a cold open in New York with a new leading actor sounded risky. The producers opted to build up to Broadway with short stints for the show in San Francisco, Denver, and finally, Chicago.

Bowie’s Chicago performances from August 5 to August 31 created a stir, says Hofsiss. Security at Chicago’s Blackstone Theater (now the Merle Reskin Theatre) “went through the roof,” and the show sold out every night, bringing in an atypical theater crowd focused on seeing Bowie’s onstage transformation. Bowie “did them a favor by expanding the makeup of the audience”—Hofsiss remembers during one performance having to ask theater security to politely tell a patron, who was wearing a black leather jacket embedded with Christmas lights, to turn off his clothing during the show.

But all the excitement over seeing the star didn’t diminish his performance, according to the director, a physical feat that required serious muscle control and contortions in order to morph into John Merrick. Bowie owned the role of Merrick, says Hofsiss, constantly working to improve, while drawing on personal experience to create his own take on the character.

“David really embraced the idea that this child had been beaten up and pushed around because of his deformities, and he was much more weary of interacting with people,” he says. “It’s a significant difference in the way the character was played like that, and I was astonished how well it worked. David understood it, having grown up on the tougher streets of London, and made it very much his own.”

Weiss, who was working on what would be her first Broadway play, says the chance to work with Bowie was a career highlight (she’s since been nominated for Oscars for her work in Frida and 12 Monkeys). The show received favorable reviews: Kurt Loder, writing for Rolling Stone, remarked that Bowie was “an electric presence” onstage.

While the part’s physical demands and busy schedule—eight shows a week, including matinees—made the production Bowie’s focus during his stay, he did get to explore Chicago and sample its culture. According to Loder’s article, Bowie even took his nine-year-old son, Zowie, to the museum campus, which didn’t necessarily go over well:

“I’ve seen aquariums and planetariums and that dreadful Museum of Science and Industry, which is like a paean to General Motors. Quite ghastly in its corrupt values—including its splendiferous Muppet presentation, where you pay $1.50 to get in, see fifteen stuffed Muppets in a glass case, and then that leads to a shop where you can buy merchandise! I mean, it was a fucking disgrace.”

He also made time to explore city nightlife. According to a Chicago Tribune gossip column, Bowie was spotted one evening at an after-hours spot called Scampi’s with Roy Orbison, who had just performed at the Park West. They were singing “Happy Birthday” to a Jam Productions executive. Neo, then a center for the city’s punk and new wave scene, was a regular haunt, according to Suzanne Shelton, who was the head DJ at the club at the time. She specifically recalled a night when Iggy Pop came to town and sat at a table with Bowie, who was drinking beer and talking about music. When the subject of Joy Division’s “Love Will Tear Us Apart” came up, Iggy said he hadn’t heard the song. Shelton requested it from the DJ, and when the now-familiar chorus came on she says, “minds were blown.” Bowie’s presence was a huge draw for the club. Shelton remembers nights where he’d have to hurry through an alley crowded with people so he could get into his limo.

“People were so wound up,” she says. “The level of obsession he has to deal with all the time, I wouldn’t want to deal with that. He wanted to see a James Brown show at Park West, but decided not to go because it would have been too much of a burden.”

During a talk at the MCA last Sunday, Geoffrey Marsh, who curated the original exhibition at the Victoria and Albert Museum, discussed how Bowie’s subversive genius lay in not directly challenging the political and social status quo, but rather in being such a daring and unique person that he would stand as a symbol for liberation and individuality. Joseph Merrick was yet another outlet for Bowie to explore those themes. Whether spent draped in that white loincloth or walking through the Museum of Science and Industry, Bowie’s time in Chicago may have been one of his most exposed, an example of one of rock’s most famous outsiders exploring what it means to stand alone.