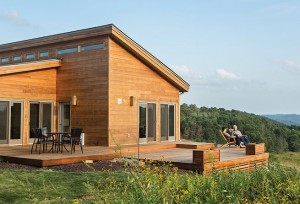 When you’re a grandson of Frank Lloyd Wright and planning to build near Taliesin—Wright’s studio and architecture school near Spring Green, Wisconsin—you have no shortage of design resources. Tim Wright, a documentary filmmaker who teaches at Taliesin, and his wife, Karen Ellzey, managing director for a commercial real estate firm, live in Boston but had a set vision for a flexible second home on a rolling hill seven miles from his grandfather’s estate. After consulting with several architects, they decided that a prefab house would best respect their plan for a flexible home that would sit lightly on the land, and they settled on Blu Homes, a start-up based in Vallejo, California, to execute it. Blu Homes’ steel-framed structures, manufactured in a factory north of San Francisco that  once churned out nuclear submarines, fold out on hinges like a pop-up book. Wright and Ellzey chose the Balance model for its flexible floor plan, spacious interior, and modern design. Unlike some other prefabs, it didn’t resemble a “glorified trailer,” Wright says, and the company’s energy and drive were a draw. The components were trucked out on two semis in 2012 and assembled in seven and a half weeks. Wright and Ellzey’s house, Blu Homes’ first Midwest project, is a 2,984-square-foot statement in simple living that cost a relatively modest $475,000, including the foundation and the added 1,184-square-foot basement.

Tim Wright: We stopped right up by the big oak [at the entrance to the property], got out on that hill, saw the 14-mile view to Blue Mounds, and something went boing: We must have this land. So we got it, 112 acres, with no clue as to what we would do. That was March 2006. We didn’t build this until 2012. There was a long period where we would just drink wine on the hill.

Karen Ellzey: I felt very at peace out here. We wanted the ability to come out here and have a space to call ours, something flexible that could become a gallery or be a place for meetings. We actually had a few architects do drawings—Tim’s cousin Eric Lloyd Wright even tried to adapt an old sketch of an unbuilt Wright home. We all agreed it was a nonstarter. One day, I decided to check modular homes and came upon Blu. I saw this layout and it felt right. If I had sketched a floor plan, this would have been the one I wanted.

Wright: Blu doesn’t give you measurements in square feet because they believe you don’t live in square feet, you live in cubic feet. The interior is 1,800 square feet of interesting space. And when you see the 16-foot ceiling, it changes things enormously.

Ellzey: It really did kind of pain me a little bit that we’re doing this manufactured home instead of working with an architect. But when you go back to someone like Frank Lloyd Wright, he’s fundamentally interested in affordable homes for the average American. While we knew it would be a little controversial, it seemed like investing in this innovation path. In a sense, it’s the most Frank Lloyd Wright thing we could have done.

Wright: I’d describe this house as artisanal. Our furnishing concept is based on transformation, with a video projector instead of a TV, a dining room table that expands to seat 12, and mounting  wires for blackout curtains or canvases, so we can easily entertain friends, show a documentary, or host an art exhibit.

Ellzey: When we visited the factory, we could see the two boxes side by side. The main space really appealed to me—you can get a real great sweep of the house. And Blu was flexible. They added two windows to the great room, since it was important for us to have a space that looked like a porch. All the architects in Tim’s family thought we chose the wrong site [facing the oak]. We fell in love with this view. As Tim said, the house wasn’t going to be the star; the landscape was going to be the star. This was just a way of accessing it.

If you were plotting a Frank Lloyd Wright tour of American architecture, the 2700 block of West Burnham Street in Milwaukee might not make your itinerary. But on this quiet street, you can find evidence of the architect’s career-long obsession with creating affordable, sometimes prefabricated, housing for the masses.

Crafted between 1915 and 1917 with precut factory lumber to save cash and labor, a half-dozen duplexes and bungalows on this block—the American System-Built Homes, as they have come to be known—were Wright’s first attempts at attainable architecture. He did more sketches for this project than any other in his career, according to Dale Gyure, a Wright scholar. Gyure notes that the homes embody ideas from “The Art and Craft of the Machine,” a 1901 speech in which Wright spoke of building affordable housing by letting machines free humans for more high-level design.

Wright was cooking up an ambitious plan with a developer, Arthur L. Richards, to sell homes via a car-dealership model when the combination of a sluggish economy and the entry of the United States into World War I effectively scuttled the project, according to Sidney K. Robinson, a professor emeritus of modern architecture at the University of Illinois at Chicago.

Wright revisited the affordable home concept often. His Usonian homes, which were built starting in the late 1930s, represent a more ambitious attempt at a design system that could be replicated, with concrete slabs embedded with piping for radiant heating and carports instead of garages. Writing in Architectural Forum in 1938, Wright identified the challenge of building “the house of moderate cost” as “not only America’s major architectural problem, but the problem most difficult to her major architects. I would rather solve it with satisfaction to myself than anything I can think of.”

These projects led to the Erdman homes, a series of three prefabricated structures that Wright designed for Marshall Erdman, a builder who had collaborated with Wright on the Unitarian Meeting House in Madison, Wisconsin. Each “set” would come with all the major pieces needed to assemble a home; the buyer would have to provide the foundation, wiring, and plumbing, and even submit a topographic map for Wright’s approval. The layouts of the two models that were constructed—the L-shaped No. 1 and flat-roofed No. 2—would “immediately catch your eye,” Gyure says, as looking a bit like previous Usonian models, more evidence of Wright’s continual refinement of affordable housing concepts.

“Wright wasn’t trying to change the manufacturing or prefab system” with these experiments, Gyure says. “He was trying to take advantage of it.”