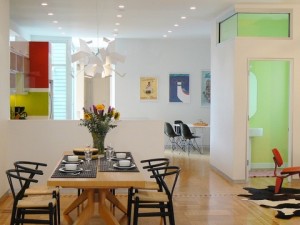 As the Chicago-based Midwestern sales rep for Burton snowboards, Matt Hoffman has a job that many feel could only be improved with closer access to real mountains with good powder. But try telling that to him before he moved into his new house, when work routinely included late-night arrivals at his apartment followed by multiple runs to unload shirts and board bags from his truck. Covering a nine-state territory required a real home base. The fantasy —a home with storage space and a showroom to demo new gear for clients and reps—would be the ideal live-work setup, a space- and money-saving move.

“I could have rented a showroom, but that’s basically a glorified, unused storage space most of the year,” says Hoffman.

Hoffman’s unlikely savior first presented itself in 2006 in the form of a former funeral home-turned-biker hangout near Chicago’s Wicker Park neighborhood. Built in the 1880s, the aged building once even sported a carriage house for the horses that drew the hearse. In the ‘60s, the building functioned as a biker chop shop. Hoffman kept the jury-rigged, dumb waiter-esque elevator in use to transport stolen bikes to the basement, which contained a homemade shooting range and more than a few copies of the Anarchist’s Cookbook. It was definitely a fixer-upper.

Hoffman turned to Morlen Sinoway, owner of an eponymous local design studio and store, to help transform the space. The straightforward brief called for about 3,000 square feet of storage, another 3,000 square feet of showroom space and separate, well-defined living quarters. By the time the gut rehab and reconstruction was finished nine months later, just a few of the structure’s original doors remained.

In a sense, Sinoway approach the job like a user experience designer, plotting out his client’s needs and daily routine. Designed around functionality, Sinoway made sure the bachelor pad had enough flexibility to adapt to a family, foresight Hoffman—now married to Christine and father to Henry—certainly appreciates.

The ground floor best exemplifies Sinoway’s approach, which provides church-and-state level separation between home and work life. Behind the nondescript red front door sits a well-appointed entryway with a stairway leading to the family’s home. Clients coming to talk business can head straight back to the showroom floor, formerly the viewing room for wakes and staging area for caskets. The ground floor now resembles an industrial chic retail space, boasting concrete floors and banks of sales racks to showcase boards and clothing, as well as a separate garage for Hoffman’s own vehicles. Unused wooden snowboard cores, rejected during the production process, line the walls, and panels made from the same material are suspended from the ceiling to form an undulating pattern overhead. Designed for presenting next year’s new products during the busy winter season—the wall panels even have routed top with a small indentation cut to support hangars—the space contains deliberate break points and barriers that keep visitors from realizing they’re inside someone’s home. And the extensive basement offers Hoffman plenty of storage space.

But once guests journey up that front staircase, striped down to its original form, they immediately feel at home. The open main floor welcomes with a warm color palette and natural light. “We found out that none of the walls were load-bearing,” says Hoffman. “So we just kept removing and removing.”

Formerly a dimly lit living space that, improbably enough, was home to a poorly installed 10-person Jacuzzi, the second story now stretches out in full color. Guests enter an area covered in a patchwork of art and objects, such as travel posters and a metal coat of arms found in the basement. To the left, near windows overlooking the park, a small sitting area and office invite either work or relaxation with a custom-built gray sofa from Sinoway, a pair of leather Corbusier chaise lounges and custom cabinetry and desks by Hoffman’s friend, carpenter Scott McGlasson. The dining area—complete with Hans Wegner chairs circling a Matthew Hilton Cross-Extension table and Pallucco Glow Square pendant lamp—gets additional illumination from a frosted glass transom overhead. Sinoway added panes of semi-transparent glass in numerous places to provide light and privacy in the house, built before lot sizes were institutionalized in the city—it even bumps against a neighboring building in a few spots. Splashes of color in the cork-floored open kitchen add charisma and charm to a natural gathering space.

The top floor, a former hayloft tuned master suite and rooftop deck, stands as a perfect perch to enjoy Chicago’s warmer months. Summer sunshine streams through the east-facing windows of the bathroom, designed with custom vanities and drawer pulls. If there’s snow outside, a gas fireplace under the platform stairs warms the house. The spacious rooftop deck, done in a mosaic tile pattern, is one of their dog’s favorite spots, though it’s unlikely he appreciates the view of the city skyline.

The view of glass-and-steel towers from the rooftop makes it seem a world away from work. While Hoffman’s office is only a few staircases down, smart design and warm touches make it a more than affable arrangement.