Young and the Restless: With their sophisticated second album, Chicago rock upstarts Smith Westerns prove they’re all grown up 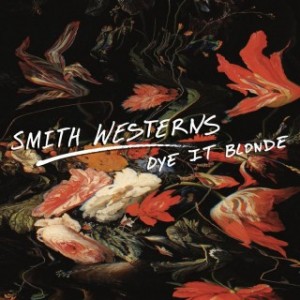 It’s early in the afternoon and Cullen Omori is sitting behind a small table at Intelligentsia, a coffee shop in Chicago’s Loop business district, sipping a cup of black coffee and occasionally brushing back his long, dark hair like Mitch Kramer from Dazed and Confused. His bandmates in Smith Westerns— his brother, bassist Cameron, and guitarist Max Kakacek—are driving around in their white tour van; they couldn’t find parking downtown, so they just dropped their frontman off to do the interview solo.

The kids, it seems, are all right. But once you listen to Smith Western’s sophisticated sophomore album, Dye it Blonde, a blazing set of fuzzed-out, tightly wound guitar pop inspired by everything from Zeppelin and Big Star to Suede, you’ll have trouble referring to them as kids. They’re understandably sick of hearing it. Sure, the guys released their self-titled debut in 2009 when they were still in high school, and, yes, they still crash at their parents’ when they’re not touring, and, no, they can’t legally order drinks. But take in Omori’s soaring, wistful lyrics (“I want to grow old before I grow up,” on “All Die Young”) or hear him talk about life on the road, surrounded by examples of arrested development, and a more experienced voice emerges.

“The idea of the lyrics on Dye it Blonde is about wanting, whether certain things are attainable or not,” says the 20-year-old. “I want this, I want that. It doesn’t get me off to write redemption or drug songs. I feel like those are played out. If you like to get fucked up, that’s your business—you don’t have to write every song about it. The lyrics here talk about romanticism. A lot of other bands write about how great it is to be young. But I’ve done all these romanticized things. It’s not that great. Is it going to get better?”

Omori admits that his band is privileged to be where they are right now, concentrating fully on music. How many other 20-year-olds count photographer Ryan McGinley as a friend and have opened for MGMT? In the same amount of time it took many of their contemporaries to rack up a couple of semesters of college credit, Smith Westerns went from being high school pals at Northside College Preparatory school to an accomplished act with slots at the Pitchfork Festival.

“It used to be the norm to be this age in a band,” Omori says. “People had already made their famous record. It seems like it hasn’t changed in other genres of music—look at Taylor Swift or a lot of rappers— except indie rock. This is the time to do it. Being in a buzz band now [doesn’t have to be] prefaced by four years at art school and a move to Williamsburg.”

Instead of setting up a recorder in Kakacek’s basement—as they did for their debut—Smith Westerns had a real studio in New Jersey at their disposal for Dye it Blonde. From Kakacek’s gritty riffs playing off the background chimes of “Weekend” to the anthemic bridge on “Smile” and solemn organ and guitar on “All Die Young,” this is music that glistens.

“Lots of bands are just chords and dinky guitar breaks,” says Omori. “They learn to play well, but can’t wield that skill in a way that benefits songwriting; it’s the Guitar Center generation. We liked the idea of keeping the instruments timeless. We paid attention to the riffs.” He brushes his hair out of his eyes and smiles. “The solos here are epic.”