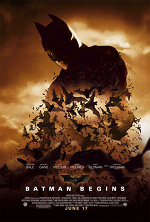 Reconceiving Batman requires radical thinking, and Memento director Christopher Nolan takes a revolutionary, and revelatory, approach with Batman Begins. Waking from a recurring flashback of his childhood fall down a bat-filled well, Gotham’s most famous son Bruce Wayne (Christian Bale) finds himself in a place many of us would consider a worse nightmare: a cell in a Chinese prison. But the wealthy playboy didn’t get caught at the wrong end of a Midnight Express-style vacation drug bust – he chose to be there. Racked with guilt and anger after witnessing his parents’ murders as a child, Wayne set out to travel the world in an attempt to understand the criminal mind, only to end up incarcerated. He finds salvation in Henri Ducard (Liam Neeson), an eccentric who brings the wayward Wayne out of prison and into the fold of secretive warriors who train him to confront fear and fight evil. Ready to kick ass, Wayne returns to Gotham and creates his alter-ego: Batman. As is usually the case with superheroes, his timing is impeccable – a madman is about to poison the city’s water supply with a hallucinogenic drug.

By focusing on the complex emotions seething beneath the surface, Batman Begins provides a gripping exposition of the Batman myth. Bale gives an intense, nuanced performance as the Dark Knight, invigorating a role that has grown stale (or disasterous, depending on how much you hated Joel Schumacher’s Batman & Robin). Bale’s version of Batman wakes up bruised and battered but immediately does push-ups. This is likely a nod to Bale’s American Psycho regimen, but it’s also a telling portrait of a man fighting with missionary zeal. The supporting cast is also excellent. Loyal butler Alfred (Michael Caine) helps reclaim Wayne Manor, reclusive inventor Lucius Fox (Morgan Freeman) arms Batman to the teeth and friend Rachel Dawes (Katie Holmes) helps Wayne find his moral center. The fantastical feel of Tim Burton’s first two Batman flicks is absent from Batman Begins. This new movie, a steely meditation on the meaning of revenge and justice that’s as dark as it is dashing, presents a more complex hero struggling to find his place.