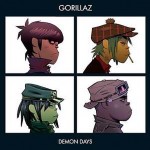 It’s a bad sign for a politician when animated monkeys dis your war record. That’s the state Dubya finds himself in with the release of Demon Days, the latest album from the virtual hip-hop collective Gorillaz. On the smoldering track “Dirty Harry” — which starts out as a demented Donkey Kong theme song and builds into a roller coaster of angry rapping — guest vocalist Bootie Brown raps from the point of view of a soldier in Iraq and declares “The war is over / So said the speaker with the flight suit on / Maybe to him I’m just a pawn.” An anti-war missive may seem oddly serious and preachy from this cartoon crew — which is a front for Brit-pop icon Damon Albarn, mash-up maestro Danger Mouse and a host of collaborators — but it actually fits in perfectly with the gloomy tone of Demon Days. The lyrics border on apocalyptic, Albarn’s slacker delivery is dead on and many of the numerous guest spots are equally effective. MF Doom spits lick rhymes on the shuffling “November Has Come,” De La Soul delivers a haughty performance on the otherwise breezy “Feel Good Inc.” and the opposing sounds of booming British rapper Roots Manuva and angelic chanteuse Martina Topley Bird compliment the dramatic “All Alone.” It’s an eclectic album filled with dance grooves, guitar dirges and the work of two separate choirs, but Danger Mouse manages to corral is all together with futuristic grooves, theatrical flourishes and impeccable production.