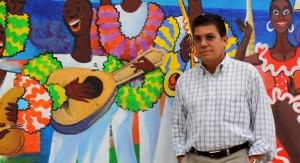 One of the greatest advantages of being a melting-pot city is the eclectic tastes and cuisine that immigrants import into their adopted home. Granted, the American palate can sometimes be a bit bland, but that hasn’t stopped generations of newly arrived Americans from setting up shop in Chicago and selling food the way mother used to make it. Since cuisine and the immigrant experience often go hand-in-hand, The A.V. Club asked three Chicago restaurant owners/immigrants to talk about their experiences with the quirks of foodservice in the U.S.

Julio Perez from Siboney Cuban Cuisine
Coming to America: “I emigrated in a boat, the same way Scarface did,” says Julio Perez, the co-owner of Siboney. After arriving in 1980, Perez did things the American way and went to college at the University of Indiana. Desperate for a home-cooked meal, and depressed by the lack of local Cuban options and terrible Mexican joints at the time, he teamed up with seven Cuban law students, acquired a Cuban cookbook, and got to work.
Food from home: Perez remembers always being hungry from Fidel Castro’s food-rationing program. Still, he has his favorites from home, including tasajo, cured dried beef, and pig’s feet. He thought about adding it Siboeny’s menu, but then had second thoughts. “Are you really going to try and serve this to American people?” he remembers thinking. “They’ll puke on the plate.”
Cooking translation: Siboney Cuban Cuisine is an attempt to recreate sophisticated, old-school Cuba from the ‘40s and ‘50s, the scene you’d see in a movie like The Lost City. Perez dropped his 20-year real-estate career to open the restaurant with a partner. He researched old Cuban recipes on the web, and the current chef just came from Cuba, so he doesn’t cook with “foreign ingredients” like cilantro. Perez says he doesn’t have any problem recreating food from home, but the meat in the U.S. is a bit off. “It tastes different, due to the way it was raised and processed,” he says. “Here it’s hormone-based and fat. The flavor is missing.”

Branko Podrumedic from Little Bucharest
Coming to America: Arriving in the U.S. in 1979 from a small Serbian town just across the Romanian border, Podrumedic didn’t even know what pizza was when he first set foot in Chicago. He started out as a janitor, but when his father purchased Maxwell Street Express, a fast-food joint, he jumped into the restaurant industry. He’s been serving Romanian food in Chicago for three decades, at the original Little Bucharest on Ashland Avenue, Continental Café, and the recently reopened Little Bucharest. (Closing it was, as he puts it, “the mistake of my life.”)
Food from home: Stuffed cabbage with polenta, with a side of sour cream and homemade feta cheese, was a regular meal growing up, Podrumedic remembers. (Bread was too expensive.) Now, his restaurant serves more upscale takes on Eastern European cuisine, like goulash made from short ribs. He says it’s made in a “contemporary style meant for young professionals, not grandma and grandpa.”
Cooking translation: Podrumeric says he doesn’t have too much trouble recreating cuisine from home, such as veal paprikash, tripe soup, and homemade sausages. He even nails the atmosphere—he occasionally books Romanian singers and imports some Romanian beer.

Muhammed Rukli from Angin Mamiri (2739 W. Touhy Ave., 773-262-6646)
Coming to America: Muhammed came to Chicago from Indonesia in 1983 with his wife Ida after he was offered a job at the Indonesian Consulate. They’ve been busy running an Indonesian catering company for parties and special events for the last decade, and after enough customers inquired about a permanent restaurant, they were encouraged to open Angin Mamiri (which translates to “gentle breeze,” and is the title of a famous song) in Rogers Park last June.
Food from home: Born in the city of Bone, in the South Salawesi province, Rukli remembers food in Indonesia being a little fresher. That was due, in large part, to less use of refrigeration and the fact that halal butchers work in the world’s most populated Muslim country. Angin Mamiri standards include sate (or satay), baked fish, and coto makassar, a beef soup with tripe and sticky rice cooked in banana leaves. In Indonesia, the soup is often made with tongue and intestines, but, as Rukli says, “Americans don’t like it.”
Cooking translation: Recipes, like those for the delicious rempeyak kacang (garlic-flavored peanut chips) and jalangkote (chicken puff), all come from Ida’s family, and seem destined to attract customers beyond the city’s Indonesian community. Rukli even reached out to America’s most famous former Indonesian resident, President Obama, and told him he could get home-cooked food like gado-gado (vegetable salad) or mie goring (fried noodles) in his hometown. So far, he says, his e-mail hasn’t gotten a “positive response.”